Primary challengers pressure the governor from the right 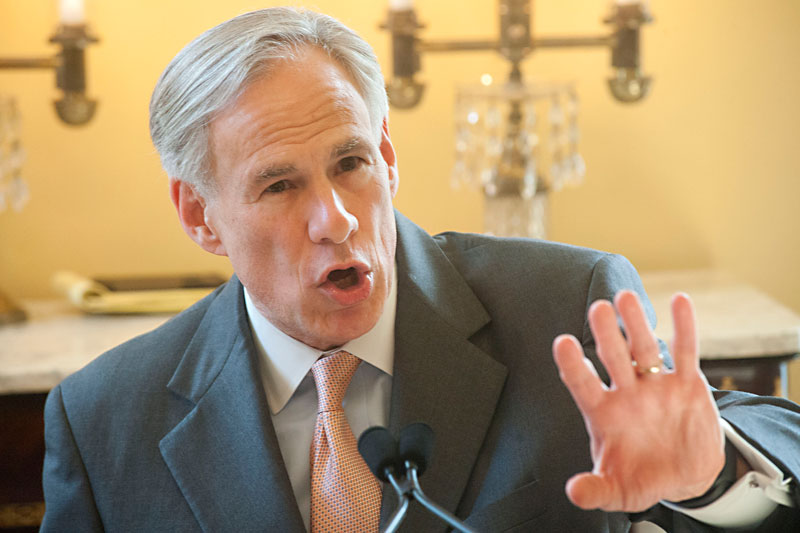 Gov. Greg Abbott's speech last week in Lewisville to tout a parental bill of rights was expected to be a full-throated endorsement of vouchers, until it wasn't.

Observers can't be blamed for suspecting Abbott would put a push behind a key red-meat issue like school choice, be it vouchers or private school tax credits. Primary challengers Don Huffines and Allen West have come at Abbott hard from the right. Huffines, in particular, has taken swipes at Abbott, sending out slick emails with subject lines such as, "Abbott thinks you're stupid," and, "Beto can turn Texas blue (but I won't let it happen)."

Then there was the speech by Texas Pub­lic Policy Foundation CEO Greg Sin­delar introducing Abbott at the TPPF Policy Orientation last Wednesday. "By passing a parental bill of rights we ensure that every child, every child has access to a quality education of their choosing," Sindelar said. "And every parent feels empowered to act in the best interests of their child. And we know if we do this that we can forge an education system that's built on transparency, quality, respect, and choice."

We already know TPPF is a vocal proponent of school choice. We also know Abbott and Lt. Gov. Dan Patrick personally support choice legislation. "As Republicans or conservatives, we believe that your education should not be tied to your ZIP code. We believe in school choice," Patrick told TPPF on Friday. "The left believes the government owns your children, and they will tell them what to learn, and that the parents have no voice. That's the left view – anti-charter and anti-choice."

As for Abbott, the governor has said in past sessions he would sign any school choice bill that came to his desk. But when it came down to Abbott's actual speech on a parents' bill of rights last Thursday in Lewisville, Abbott did not lead with a school choice message.

"I attended public schools, including one in Dallas County, when I was growing up," Abbott told the crowd at the Founders Classical Academy, a public charter in Lewisville. "As governor, I've devoted more funding toward public education than any governor in the history of our state. But all that being said, we need to understand that at the end of the day, no government program can replace the role that parents play in the education of their children."

Observers can’t be blamed for suspecting Abbott would put a push behind a key red-meat issue like school choice, be it vouchers or private school tax credits.

Then Abbott outlined what he did want in his parents' bill of rights: Give parents access to school curricula online. Provide parents with a venue for protesting curriculum or books. Require school districts to provide parents with information about charter and magnet school options for their children. And, in an effort to protect student privacy, stop the selling of student data to outside vendors; outgoing Senate Finance Chair Jane Nelson, R-Flower Mound, carried such a bill during the last session that did not make it to Abbott's desk.

"Parents are losing a voice when it comes to their child's education and health care matters," Abbott told the audience in Lewisville. "Many parents are growing increasingly powerless about what to do to be able to regain that control. That [is why] I am running for reelection, to create a parents' bill of rights, to restore parents as the primary decision-makers of their child's education and health care issues."

The Texas Education Code already has a chapter on parental rights, added by then-Rep. Scott Hochberg, D-Houston, way back in 1995. What Abbott is proposing sounds suspiciously like the Florida Parents' Bill of Rights adopted last year. The health care exemptions under the Florida legislation allow parents to opt out of vaccines on the basis of religious objections; it also allows parents to excuse their children from performing biological dissections in class.

Abbott also wants his Texas Parents' Bill of Rights to include penalties for educators who show obscene content to students. Obscene content, as defined by the conservative movement, has included LBGTQIA-affirming books that included cartoon pictures of oral sex. "Texas will ensure that any educational personnel who is convicted of providing minors with obscene content will lose their educational credentials and state licensing, forfeit their retirement benefits, and be placed on a do-not-hire list," Abbott said.