Travis County Democrats are alarmed at the sentence being contemplated for the man who fire bombed their East Austin headquarters four months ago. U.S. attorneys prosecuting the case have crafted a plea agreement with Ryan Faircloth, accused of arson, that would send him to prison for five to six years – the most lenient punishment available in the case.

Under federal sentencing guidelines, Faircloth could receive as many as 20 years. One of the things that can lead to a longer sentence is if the arson constitutes an act of domestic terrorism, which the FBI defines as "violent, criminal acts committed by individuals or groups to further ideological goals stemming from domestic influences, such as those of a political, religious, social, racial, or environmental nature." Local Democratic officials say this describes exactly what Faircloth did. "It's hard to argue that this wasn't domestic terrorism – you know, designed to intimidate people for political reasons," said Cynthia Van Maanen, executive director of the Travis County Democratic Party. "In fact, that's the most important element of it."

According to the government's proposed plea agreement, at 2am on the morning of Sept. 29, Faircloth brought a Molotov cocktail assembled from a wine bottle and a sock to the TCDP headquarters at 1311 E. Sixth St. He threw a rock through the glass of the front door and dropped the Molotov cocktail and a lit firecracker into the room, starting a fire that reportedly caused $20,000 in damages. Faircloth also left a threatening, if ridiculous, note stating, "You can have the Golden State/the financials of New York/the mountains of Colorado" – and other places – "But the one thing you can't have is Texas. Consider this a 'light' warning."

Van Maanen and her colleagues have filed a civil suit against Faircloth seeking over a million dollars in damages. But they are also watching the criminal proceedings closely, perplexed that U.S. attorneys are going easy on Faircloth. They don't understand why the words "domestic terrorism" don't appear in the proposed plea agreement, especially after the Department of Justice announced the establishment of a task force on Jan. 12 focusing on domestic terrorism, warning of a "persistent and evolving" threat.

The same evening that the task force was announced, Travis County Democratic Party Chair Katie Naranjo appeared on The Rachel Maddow Show and described six different terrorist attacks that Central Texas Democratic groups have experienced in the last two years. She singled out the Biden bus incident from Oct. 2020, when police in San Marcos refused to come to the aid of Democrats being chased by Trump supporters on I-35. "I'm glad that the DOJ is finally going to be taking this seriously," Naranjo said. "Because does someone have to die, does someone have to get hurt, does someone actually have to be run off the road in a car wreck for this to be terrorism or for this to be real?"

District Judge Lee Yeakel, himself a former county chair of the Republican party, is expected to sentence Faircloth sometime in the next two to four months. Democratic officials note that Yeakel is not required to accept the government's proposed plea agreement. He could send Faircloth away for longer if he deems it to be in the best interests of justice. 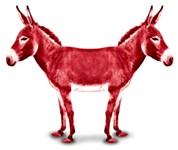 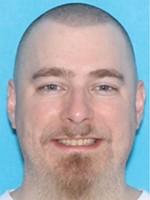 Hardcore-Nazi Austinite Wanted by the Law
After making numerous threats, local white supremacist made a mistake in threatening law enforcement