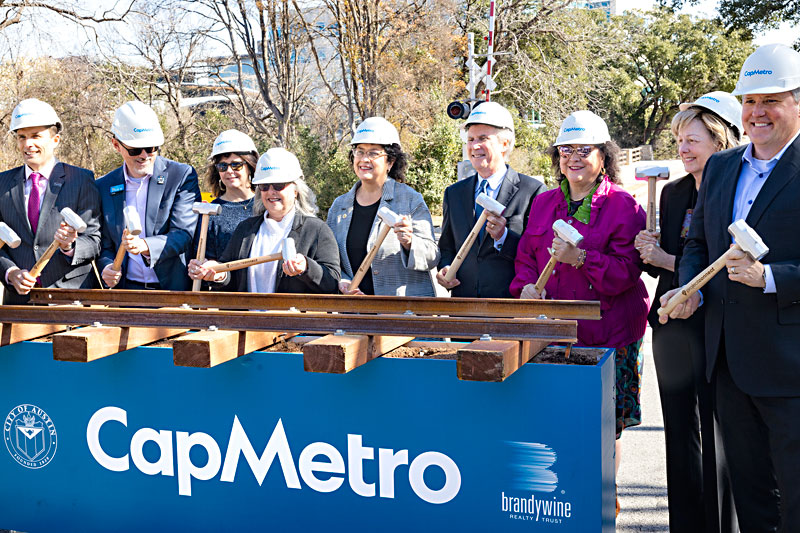 Capital Metro hosts a groundbreaking ceremony on Tuesday, Jan. 18, for Broadmoor Station, a new MetroRail Red Line station that will be situated in Uptown ATX, a 66-acre master-planned mixed-use development being built by Brandywine Realty Trust. (Photo by Jana Birchum)

Bastrop County Fire: A prescribed burn in Bastrop State Park on Tuesday turned into a wildfire that forced evacuations and road closures. At press time, the fire has burned close to 783 acres.

New Laws in Effect: On Tuesday, a mixed bag of new laws went into effect; they include HB 25, which seeks to limit trans student-athlete participation; SB 5, which restricts the use of chains on dogs outside; and three bills that introduced redistricting maps that incited a flurry of lawsuits, including from the U.S. Department of Justice.

Their House, Their Rules: On Jan. 13, Austin-Travis County issued "Protecting Customers and Employees and Preserving Adequate Workforce Capacity" orders authorizing businesses to impose health and safety requirements for staff and employees, including requiring masks, testing, or vaccinations; per the order, those requirements must be posted via signage at each entry.

Free COVID Tests From Federal Government: Every home in the U.S. is eligible to receive four free at-home COVID-19 tests from the government; order your free tests at covidtests.gov.

A.G. Courts Another Lawsuit: Following complaints from the Austin American-Statesman, Dallas Morning News, Fort Worth-Star Telegram, Houston Chronicle, and San Antonio Express-News accusing Attorney General Ken Paxton of failing to comply with the Texas Public Information Act, the Travis County District Attorney's Office gave the A.G. four days to turn over the records in question – communications he made during the 2021 Trump rally that ended in the storming of the U.S. Capitol. "My friends, this is what voter suppression looks like."