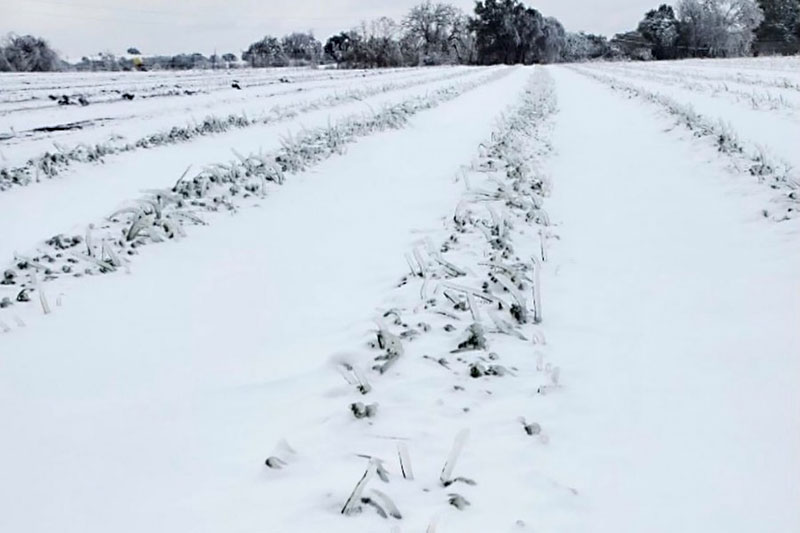 After Winter Storm Uri last February, frozen eggs, collapsed greenhouses, and dead livestock wreaked havoc on Texas farmers' and ranchers' livelihoods – and immediate relief was hard to come by. "We had farmers who would go to [the Federal Emergency Management Agency] for relief, and FEMA would say, 'You're a business, not a residence,' even though the farmers lived on the farm," recounts Judith McGeary, founder of the Farm & Ranch Freedom Alliance. "And then they go to FSA, the Farm Service Agency, and they would say, 'But you're not a farm as far as we're concerned, because you're too small, this is a hobby.'"

Texas Farm Resilience Collaborative, a new organization made up of many groups like McGeary's across the state, formed to provide immediate financial relief, a stopgap measure like so many other mutual aid and private relief efforts during Uri, before slower institutions caught up. Carolina Mueller, at the time president of the Central Texas chapter of the National Young Farmers Coalition (she's now on the board of the Texas Organic Farmers and Garden­ers Association), spearheaded the effort with a GoFundMe, "and it just sort of snowballed from there. No pun intended." Chipotle, Farmhouse Delivery, Farm Aid, and others helped the collaborative meet its fundraising goal a week after the freeze, allowing TFRC to turn no one away.

"From the very beginning, it was really important to us that we make it a statewide disaster relief program," says Mueller, "because there were other groups that were focusing on the Central Texas area, which is much better resourced than other parts of the state." Lowering barriers to apply was a priority, as crop insurance and other federal relief programs are not set up to support smaller farms. "Bigger operations have more access to capital and federal loans," Mueller says, "and farms that are associated with a nonprofit have the ability to fundraise through alternate routes. We're really trying to capture the folks who are going to slip through the existing safety nets."

The collaborative also prioritized historically underserved BIPOC farmers, for whom it is "difficult to gain access to things such as capital and risk management," says Phil Wade Ross, CEO of the Texas Small Farmers & Ranchers Community-Based Organization, which has a large membership of Black farmers in East Texas. "For our members that were able to actually receive cash, they were blown away. They were like, 'Can we really cash this check? Is this really ours?' It created so much more trust that we can build on. When Texas Farmers and Ranchers CBO calls, they're probably going to take that call because we're not blowing smoke."

Texas Farm Resilience Collaborative cannot replace the currently broken disaster-relief system accessible to small farms, says Mueller. Grants maxed out at $1,500, "so we're not talking enough to cover the $30,000 worth of losses – this was really just an emergency cash grant to get someone from one month to the next."

What it can do is maintain reserves for the next time disaster strikes – there's still funding left over from last year – and a centralized foundation upon which to start building resilience and community for farms and ranches statewide. "Resilience is not just more long-term, but also much more multifaceted than disaster relief," says McGeary. But "for the next time," adds Mueller, "we're in a position where we don't have to create the whole process from scratch."