Austin-Travis County Emergency Med­ic­al Services is approaching a turning point. The COVID-19 pandemic and Winter Storm Uri transformed how medics view the job, making many question their future in the field. The union that represents department employees, the Austin EMS Association, is at the bargaining table with city officials trying to reach an agreement on better pay and benefits aimed at slowing attrition rates, which have increased at the same time that recruitment has plummeted, creating a staffing crisis.

While all of this is happening, city management is looking for a new EMS chief capable of leading the department through change, after the retirement of Chief Ernesto Rodriguez in May after 13 years at the helm. With employee morale low, the selection of the chief and the terms of a new contract will be pivotal in retaining existing employees and attracting new ones who'll help shape how "reimagining public safety" applies to the department.

The past 18 months have cast the grueling work of emergency medical care in stark relief for medics who toiled on the front lines of the COVID-19 pandemic while others retreated to remote work. The department is short about 130 employees, and new hires can expect to earn a starting wage of slightly over $19/hour – less than that offered by private ambulance services and employers like Amazon that hire medics to work at their locations. Even temporary jobs at one of Austin Public Health's COVID isolation facilities offered a $25/hour wage.

Union president Selena Xie hopes the city's Labor Relations Office will agree to a $7/hour increase to the base pay rate for medics, and proportional increases for promoted employees. Under the current pay schedule, it would take a medic in a single­-person household seven years to exit the "low-income" category as defined by the U.S. Department of Housing and Urban Devel­opment. It would take 11 years for a single parent of one child to do the same, and 17 years for a single parent of two.

"I can't imagine a world in which the city doesn't commit to doing better by our medics," Xie told us. She estimated that about 40% of the EMS budget is recouped through revenues generated by the agency, so refusing to provide some salary increases would be "unfathomable," she said.

Recruitment has been an issue; a new EMS cadet class began Dec. 6 with fewer than half of its spots filled (14 of 30), continuing a trend of declining enrollment. "We need more than just a pay increase," Xie said, "because we're looking to be competitive and want to draw better talent." To cover staff shortages, medics often work two or three mandatory overtime shifts each month, for which they receive $2/hour while they wait to (inevitably) be called in, and then have only two hours to show up before being charged with a work absence. EMS employees also dislike a 2012 change that increased the length of service required to retire with full benefits from 23 to 30 years. More than 60% of employees surveyed by the union said they will not work at Austin EMS for that long.

On Dec. 6, the union presented its recommendation for Article 6 – pay and benefits – of the new labor agreement. Chief Labor Relations Officer Deven Desai said the city is considering the union's proposal seriously but likely would not respond until Jan­u­ary. In a statement, a city spokesperson said, "These are all important issues and the City looks forward to exploring them with the union at the negotiating table over the coming weeks."

“I can’t imagine a world in which the city doesn’t commit to doing better by our medics.” – EMS Employee Association President Selena Xie

The next chief will be under immense pressure to address labor challenges. Whether that happens as EMS continues on its traditional mission of delivering acute emergency care, or through a more innovative approach such as a preventive care focus designed to reduce call volume, is a burning question for EMS's career employees. In interviews and in the union's member surveys, front line medics say the next chief, while being suited to an executive role managing a $105 million annual budget, should also understand what it's like to run calls on an ambulance and empathize with the challenges facing overworked and underpaid employees.

"Sometimes I feel a disconnect from leadership and forgetfulness of what it's like to be on hour 20 of a brutal shift," one wrote in the union survey. Other qualities medics are looking for in the next chief include someone who will stand up to the City Manager's Office and (for example) fight for additional pay for mandatory overtime; someone who has experience running an EMS agency that's not combined with a fire department (what's called a "third service" model); and someone "who is not currently part of our executive staff."

Rodriguez's former Chief of Staff Jasper Brown, who has served as interim chief since May, is the only current EMS executive in the running. He lacks ambulance experience in Austin and is certified as an advanced emergency medical technician but not as a paramedic (EMT-P); some medics clearly feel Brown is out of touch with the front lines and their experiences during COVID and Uri, and unwilling to confront City Manager Spencer Cronk and Assistant City Manager Rey Arellano.

In September, the "education and experience" portion of the EMS chief job description mistakenly cited EMT-P certification as a requirement, though the decision had been made by Cronk and Arellano to instead require AEMT, which would broaden the pool of qualified candidates and make Brown's path more viable. Cronk bucked the Austin Police Association and its concerns about that department's current leaders when he elevated Joseph Chacon to chief, and he may be ready to do the same to select Brown. Arellano is reviewing the 37 applicants now and expects to announce soon who will move forward to interviews in Jan­u­ary. (Xie applied but was informed last week she's not advancing.) A public open house will be arranged for those who want to meet and learn more from the finalists.

A version of this article appeared in print on December 10, 2021 with the headline: EMS’ Chronic Pain 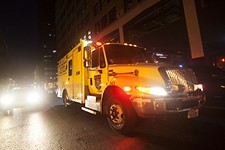