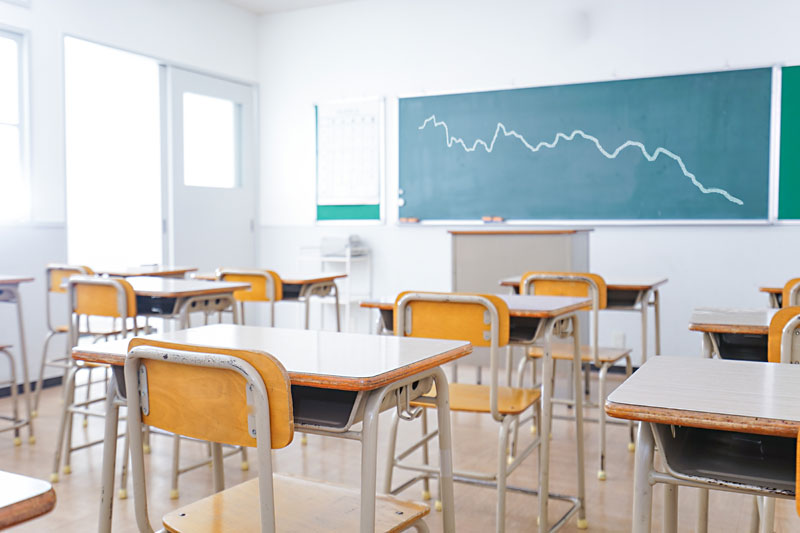 Central Texas high school bathrooms were in the spotlight again last week, but this time not as a battlefield in transphobic culture wars. After administrators at Travis Early College High School removed the bathroom doors, parents took to social media with their complaints, but Austin ISD says it's not the egregious invasion of privacy described by some. AISD spokesperson Christina Peña Nguyen described the setup as "airport bathroom style"; the stalls, which still have individual doors, aren't visible from the hall.

However, Travis ECHS leaders removed the bathroom doors for a reason: increasingly disturbing and sometimes violent behavior among students at the Southside campus. "We have had multiple significant behavioral events, along with other student code-of-conduct violations that have taken place in our restrooms already this year," Travis Principal Christina Steele Hantgin wrote in a letter to the campus community. "Our bathrooms were unsafe and student incidents are evidence of this." She added that 90% of the school's drug offenses this year had occurred in its restrooms.

The doorless Travis bathrooms are one sign of some post-pandemic disarray on Aus­tin's K-12 campuses. Last week, a parent-­student fight erupted at Eastside Memorial ECHS, with video later posted on Facebook. Ken Zarifis, the president of Education Austin, AISD's teacher and employee union, said anywhere from 20 to 40 AISD employees are calling EA's offices every day to voice their concerns. In the most disturbing incident he's heard, a student banged on a classroom door saying they were "going to kill you" to someone inside.

Educators and counselors in districts across the country are struggling to help students readjust to campus life after the COVID-19 pandemic claimed thousands of lives, stressed millions of families, and upended three semesters of in-person learning. Despite the apparent increase in fights, threats, and disruptions reported by Zarifis and other observers, AISD's disciplinary reports are actually down this semester.

Educators and counselors in districts across the country are struggling to help students readjust to campus life after the COVID-19 pandemic claimed thousands of lives, stressed millions of families, and up-ended three semesters of in-person learning.

That's in part because in June, the district revised its disciplinary policies to address equity concerns and the "school-to-prison pipeline" that magnifies routine adolescent troubles into life-altering challenges for many young adults. Prompted by internal data showing that Black and Hispanic students, particularly from low-income households, have been disciplined far more often than white students, AISD has placed limitations on suspensions, increased oversight of disciplinary actions, and refocused on providing behavioral support on campus.

Zarifis doesn't disagree with the policy change, but he wonders if it has discouraged teachers from reporting behaviors that aren't conducive to learning and that show students need more help. Though he'd like to see more counseling services available, he knows the resources simply aren't there, as the district's continued enrollment decline has led to a $62.2 million deficit for the current school year, which AISD administration says it has plans to close before the year ends.

To avoid things getting even worse, Zarifis says, the district will have to get used to reprioritizing what it has to work with. He believes the current situation, which has led to low teacher morale, reflects the pressure the district has felt to address academics, and make up for learning losses during the pandemic, before attending to the human needs of students and staff. "It was such an aggressive approach to curriculum," he said, "that I believe they drove right past the need for social-emotional help – the mental health services that continue to be desperately needed."

Trying to close post-COVID achievement gaps while managing student misbehavior is a lot, but it's not all. Substitute teachers are in short supply. Deadlines are fast approaching for teachers to complete 60 hours of (unpaid) training mandated in 2019 by the Texas Education Agency. Classrooms are being inspected with unannounced walk-throughs. Adding insult to injury, the district's failure to meet its enrollment goals for the 2021-22 school year means teachers won't get raises this year. The approved AISD budget conditioned a 2% salary increase on enrolling at least 77,371 students; the district announced earlier this month a final tally of just above 75,000. 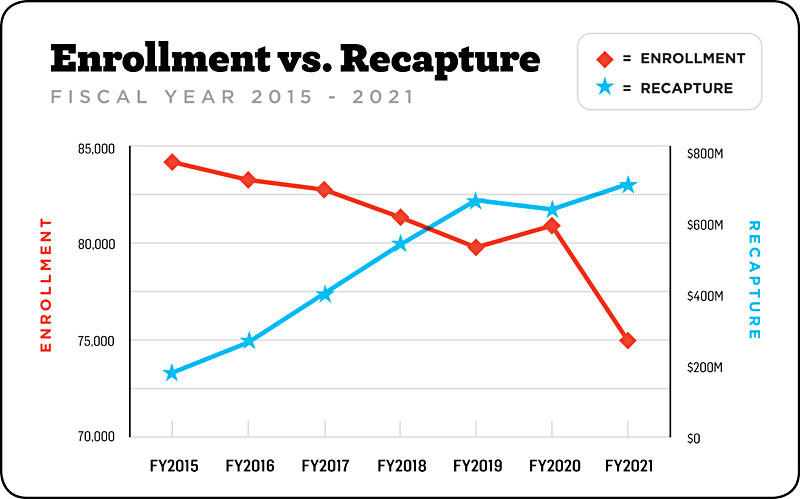 Twin troubling trends afflict Austin ISD’s fiscal health: Even as enrollment (and per-student funding from the state) continues to shrink, its recapture payments under the state’s “Robin Hood” share-the-wealth school finance plan continue to grow. Last year’s (fiscal 2021) payment of more than $710 million accounted not only for nearly half of AISD’s entire budget, but made up 25% of the entire recapture pool distributed to less affluent districts across Texas.

But Zarifis said a simple salary increase wouldn't have solved the district's problems either; the 2% raise would have only meant about $75 per month for new teachers. "That's not going to ease the pain of what's happening because of the pandemic and the stress from the district, at all," he said. Instead, Zarifis thinks teachers need to feel that the pain they're going through is understood and recognized, which will only happen if AISD administrators listen to employee feedback.

The enrollment number came as a huge blow to the district, which rolled out optimistic and ambitious efforts over the summer to recover some of the thousands of Austin families whose children disappeared from AISD's rolls during the pandemic. (Or who never arrived in the first place, as pre-K or kindergarten students). Since TEA's funding formulas are based on attendance, falling more than 2,000 students short of the budget estimate translates into about $18.5 million in red ink, on top of the $43.6 million structural deficit AISD planned to close from its cash reserves.

Explaining the situation in a November 3 budget information meeting, AISD Chief Financial Officer Eduardo Ramos placed the deficits in context. Even had the pandemic never occurred, the district's declining enrollment was not a surprise. A 2016 report forecasting the next decade's student populations predicted that AISD, which at the time had more than 83,000 students, would see enrollment dip below 80,000 in 2021: "Lower birth rates combined with the lack of affordable housing will have a negative impact on projected growth at the lower grades [that will] lower projected numbers for the higher grades towards the end of the ten-year period." The traumas of COVID-19 accelerated this timeline but didn't create these dynamics.

Meanwhile, as Austin families have become accustomed to hearing, the state's "Robin Hood" school finance recapture system, instituted in 1993, makes off with almost half the revenue AISD raises locally, mostly through property taxes, to redistribute to less affluent districts. Recapture requirements are based on the value of a district's taxable property, and as Austin has gone from the state's most affordable big city to its most expensive, AISD has become the largest single contributor to Robin Hood. "When you look at all recapture payments throughout the state of Texas from wealthy school districts, Austin ISD sends about 25% of those total overall payments," Ramos said.

But as the district's own estimates predicted in 2016, the ever-increasing cost of housing in AISD is driving families and students to nearby districts. Media relations specialist Eddie Villa told the Chronicle that enrollment losses to private and charter schools, which this summer's enrollment drive sought to counter, are less significant than those caused by the search for affordability.

"That's what makes our budget even more challenging," Ramos said. "Because our property values are continuing to increase as a school district just because of the Austin-area market, and then we receive fewer students than anticipated." It doesn't matter that the people moving to Austin from more expensive cities and states, who can afford to overbid (and even pay cash) for local housing, don't all have children; as AISD's recapture payments increase and its enrollment declines, it ends up spending about the same per student.

According to Zarifis, while Texas public schools are simply not funded adequately to meet the needs of the state's young people, AISD needs to lean less heavily on Robin Hood as an excuse for not managing its dwindling funds in creative and effective ways. "The recapture is egregious in Austin just because we're so filthy rich here," he said. "The funding per student is the same [as] if not greater than other students throughout the state, so that argument just doesn't fly."

Long-term relief from recapture isn't likely any time soon; although the state's Republican-controlled Legislature isn't a huge fan of Robin Hood either, AISD's biannual efforts to reduce its payments to the state have only been minimally effective. In 2019, the Legislature did pump $6.5 billion into the public school system, providing districts like AISD with some financial breathing room. That year's House Bill 3 – the "Texas Plan" – offered some targeted recapture relief as well as increased per-student funding, teacher pay, and support for pre-K statewide.

Since then, even as the pandemic created new fiscal stresses on Texas schools, the Legislature hasn't done much to revamp school finance. Federal relief for schools under the 2020 CARES Act and 2021 American Rescue Plan Act – including at least $155 million for AISD – continues to be bottlenecked at TEA with little indication as to when it'll make its way to local districts. That could be really useful to address the district's $62.2 million deficit, but Zarifis believes AISD can close that funding gap without layoffs, unlike the nearly 800 positions it cut in 2011 to alleviate a $94 million shortfall.

The district in the spring announced it would eliminate 200 teaching positions through attrition (resignations and retirements) in anticipation of having fewer enrolled students. As the Chronicle reported in May, AISD Chief Academic Officer Elizabeth Casas noted that only 11% of the district's beleaguered special education staff would recommend the district as a great place to work. Seven months later, Zarifis says the rest of the teachers aren't doing much better, a morale crisis that isn't completely captured by staff turnover figures, as many who want to leave won't because they don't have any better options.

The real heavy lifting begins in January, when school principals begin to work on their campuses' itemized budgets for 2022-23, at which point all cost-cutting measures will be on the table. Before the process begins, the district will accept budget feedback through community conversations and online submissions.