Would a proposed a stand-alone City Marshal Office be unmarshaled? 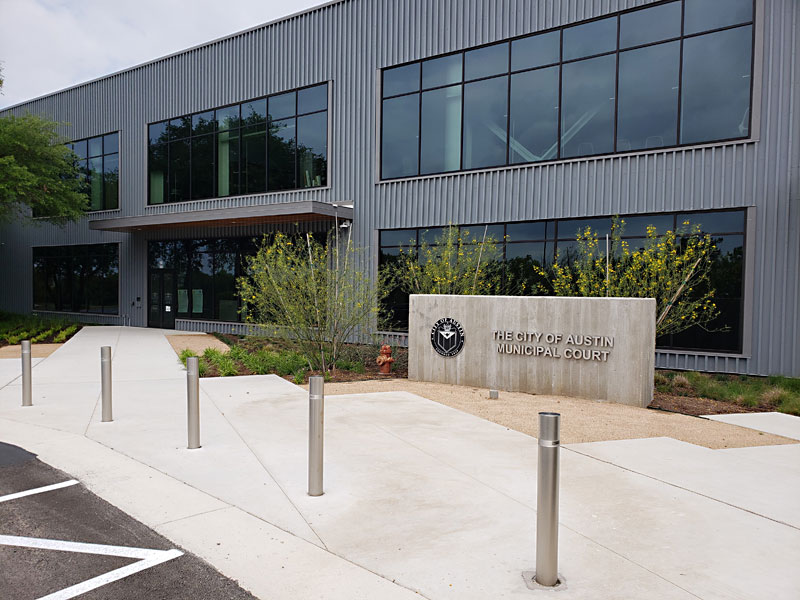 City Council members and criminal justice advocates were caught off guard this week by Item 35 on the Council agenda today, Nov. 18, that would create a new law enforcement agency in Austin specifically tasked with providing security at Municipal Court.

The court has operated virtually since March 2020, but partially opened for in-person services in July of this year at its new home on Burleson Road in Southeast Aus­tin. Security there has been provided by seven Austin Police Department officers and by private security paid through the court's budget. If approved, Item 35 would create a stand-alone City Marshal Office, a $2.8 million state-certified law enforcement agency managed by the court. From 1987 to 2006, the city had a Marshal division which reported to the Law Department; it provided security at the airport and Municipal Court, but was consolidated under APD in 2008.

After a frenzy of calls made by justice advocates prompted thorough and skeptical questioning at Council's work session Tues­day, the item will be postponed; it's not clear just when it will be back. Those advocates – especially ones who served on the City-Community Reimagining Public Safe­ty Task Force – knew nothing of plans for the City Marshal, even though staff indicated to Council that the office would further the goals of the RPS effort.

"As part of the Reimagining Public Safety initiative," the agenda backup for Item 35 reads, "establishing a City Marshal program will allow APD to reassign its officers to functions that require sworn peace officers working in the community." That language rubbed advocates the wrong way, as the city departments involved gathered input internally but not from the community. "I find it incredibly concerning the way this proposal was brought to Council," Texas Fair Defense Project Deputy Director Jessica Johnson told the Chronicle, saying the staff move "speaks volumes to whether the city is truly committed to reimagining public safety, or [is] just putting a pretty label on power structures continuing to function without community participation."

Austin Justice Coalition Policy Director Chris Harris said the proposal is swapping "cops for cops" – while the APD officers would return to patrol, the City Marshal chief and deputies would have the same authority to arrest people and use force as the officers being replaced, even if their duties are ostensibly more limited. Council likewise questioned what value was being added; in the 18 months staff estimates it will take to staff up the new office, Austin's police academy will have graduated as many as 250 new cadets. Why couldn't some of them be assigned to Municipal Court? Would the training of the deputy marshals also happen at the academy? (Assistant City Manager Rey Arellano, who oversees the city's public safety departments, said no, but where the training will take place is not yet determined.) Would the Marshal Office be accountable to the Office of Police Oversight?

Even the Municipal Court itself is ambivalent. Presiding Judge Sherry Statman told Council, "This is not what we wanted. We do not want to be in the law enforcement business. We are a court ... this is something quite new to us." However, Municipal Court Clerk Mary Jane Grubb explained, the Marshal proposal is the best alternative to continued APD security, their preferred option. While Grubb said she understands the concerns and wants to work with advocates, "there are certain things we can't do until we have Council approval," such as apply for certification through the Texas Commission on Law Enforcement, begin recruiting a chief marshal, and order uniforms and vehicles – all tasks that contribute to the 18-month lead time.

Over the past five years, the Municipal Court has seen a 75% reduction in cases but a 275% increase in “security incidents.”

Ensuring a safe courthouse experience for everyone who enters – staff, attorneys, and defendants alike – has been a concern. Grubb reports that over the past five years, the Municipal Court has seen a 75% reduction in cases but a 275% increase in "security incidents," such as threats, escape attempts, and introduction of weapons. The Down­town Austin Community Court sees similar defendants, but they have social workers trained in de-escalation techniques on staff to help when tensions escalate; Municipal Court depends on their security to perform that work. Grubb hopes that engaging with community stakeholders can help develop "guardrails" around what the courthouse security force can and cannot do that will help create a safe environment for all. "The purpose of the program is to provide court security for everyone who enters the building," Grubb said. "We plan on engaging the community and getting stakeholder input to create a model Marshal Office."

The Municipal Court hears low-level misdemeanor cases, such as traffic and ordinance violations like public camping. Most of the defendants appearing before the court are indigent; many of TFDP's clients have cases there, and Johnson said, "We need to make court staff and the people accessing the court feel safe when interfacing with it." That means developing policies and procedures that account for the perceptions and needs of both groups, in particular by not assuming every defendant walking into the court is a potential threat. "It takes time to do this work," Johnson told us. "But a process with meaningful community engagement will produce more just and equitable outcomes than if we continue to depend on policing solutions to problems."