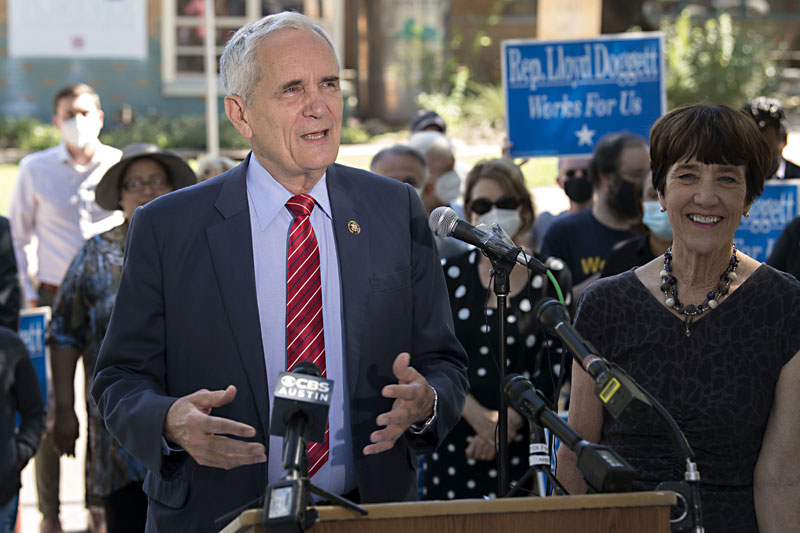 The ink has barely dried on the maps spat out of the redistricting machine as exhausted lawmakers wrapped up the third(!) special session of the 87th Texas Legis­lature this week; it's even more damp on the first litigation challenging those maps, filed Monday in federal court in El Paso by the Mexican American Legal Defense and Educational Fund. But while the suits by MALDEF and other plaintiffs (including state Sen. Sarah Eckhardt, D-Austin) roll slowly forward, the aspirants for those newly drawn seats have kicked off their campaigns quickly, shaking up the Central Texas electoral landscape one month before filing begins for the March 2022 primaries.

First into the starting gate was Rep. James Talarico, D-Round Rock, who saw his Williamson County district turn a rich ruby red in the final Texas House map sent to Gov. Greg Abbott. His three colleagues who also flipped former GOP seats in 2018 – Reps. John Bucy III and Vikki Goodwin of Austin and Erin Zwiener of Driftwood – all saw their swing districts become Dem­o­cratic fortresses in the new map (Zwiener's at the last minute, with a successful floor amendment to draw her home into the new blue seat anchored in San Marcos). But no such luck for Talarico, the youngest member of the Lege, despite his having come home early from the quorum break to D.C. earlier this summer, ostensibly to work and mend some fences with his GOP colleagues. However! Just across the county line, the Travis County seat where Talarico grew up and graduated from McNeil High School and worked for former Rep. Mark Strama will be open in 2022, as Strama's successor Celia Israel gears up for a likely Austin mayoral race. "The community that raised me deserves a representative that is battle­-tested and knows how to fight Repub­licans and win," Talarico said in a statement announcing his move from House District 52 to HD 50. "If they think they can keep me out of the House, they better think again." The district is nearly 60% non-Anglo (becoming more so with redistricting), and Pflugerville City Council Member Rudy Metayer is already exploring a run with prominent Black support, so Talarico's coronation is not guaranteed.

Another local elected official of color and HD 50 resident, who had been tapped as a potential successor to Israel, has instead set his sights higher on the ballot. Council Member Greg Casar on Tuesday announced his candidacy for Congress in what will be the open TX-35 seat, stretching from East Austin to the Alamo, as current U.S. Rep. Lloyd Dog­gett casts his hat into the ring for the newly created TX-37, a safely Democratic district including most of Austin west of I-35. Speaking on Monday at Bryker Woods Elementary – where he was captain of the safety patrol as a boy, more than six decades ago – Doggett said, "Neigh­bor­hoods like this one where I grew up, and from which I was originally elected, have been carved up outrageously in the past, but they are finally reunited." While thanking the friends and supporters from the farther-out parts of Texas that he's represented in his 13 terms in Congress (including, for a while in the mid-Aughts, the Rio Grande Valley), Doggett choked up: "I will have to admit that deep down, I have always in my heart wanted to be back representing a united Austin."

While Doggett will almost certainly face opposition in the March primary, many local political leaders with the reputation and wherewithal to challenge a man who was first elected by Austin voters in 1973 (including Eckhardt, Austin Mayor Steve Adler, and the whole Travis County Commissioners Court) are happy to back Doggett in what he's made clear is close to the end of his career. "In Austin, as political as it is, there's no entitlement" to the seat, Doggett told us before his announcement. "I don't plan to be in Congress forever [and] be carried out in my boots. I'll be back here in Austin, doing something else." Council Member Greg Casar (Photo by Jana Birchum)
“I think we expect dark money and the lies we’ve seen from the right wing to come into this kind of race; it’s what we’ve seen for all young progressives.”– council member (and Likely U.S. House Candidate) Greg Casar

Yet "the idea of being there with a Dem­o­cratic majority to get some of the things done that I'd been unable to address while in the minority" – as Doggett was for nine of his 13 terms – "has a great deal of appeal." It holds similar appeal to Casar, who passed last year on a run for the state Senate seat now held by Eckhardt (and, back in 1973, by Doggett) and has gotten to see the limits to what Austin City Hall can do up close and personal. Texas GOP leaders' jihad against the capital city has targeted the young socialist organizer and his issues directly, from paid sick leave to decriminalizing homelessness to funding abortion support groups and legal aid for undocumented immigrants. "Trudging through the snow, bringing blankets from my house to one of our shelters during the winter storm [Uri], I saw Abbott on Fox News making stuff up about windmills and the Green New Deal," Casar told us this week. "And I felt that people are struggling in the state and we've got to get around people like Abbott, and the place to do that is in the U.S. Congress."

This was at least partly fantasy until it became obvious that Doggett intended to run in TX-37, at which point Casar buckled down and assembled a large and impressive "exploratory committee" over the last week. (Unlike Israel's similar move in a mayor's race that she can't even file for until next August, Casar has only about a month of "exploring" to do.) "I wanted to make sure that it was clear that I'm working to be the progressive Democrat that's delivered organizing wins in this open seat," Casar told us. "I think folks need someone that is going to be a progressive fighter with a proven record to get it done."

To that end, Casar's campaign is being backed by other progressive local leaders in Austin, San Marcos, and San Antonio, and while it's possible another contender with his issue profile would enter the race, it's more likely that a more centrist, corporate opponent will emerge as his major challenge. The buzz so far is around state Rep. Trey Martinez Fischer, D-San Antonio, who is fairly progressive but who is also a prodigious fundraiser in the Wild West campaign-cash environment of the Lege; when the congressional map was finalized, Senate Redistricting Chair Joan Huffman, R-Houston, said TMF's home had been drawn into TX-35 "at his request," but he's not made a further announcement.

"I think we expect dark money and the lies we've seen from the right wing to come into this kind of race; it's what we've seen for all young progressives," Casar said. "But we can put really big fundraising numbers together that are people-driven. We've done it before in Council races, raising hundreds of thousands of dollars with a $350 contribution limit." (The congressional limit is $2,900.) "I want to show that I can do that again, and not take corporate PAC money and take on multinational big corporations not just in the campaign but as a member of Congress."

A version of this article appeared in print on October 22, 2021 with the headline: Everybody’s Jumpin’