City emphasizes equity as it ramps up climate action 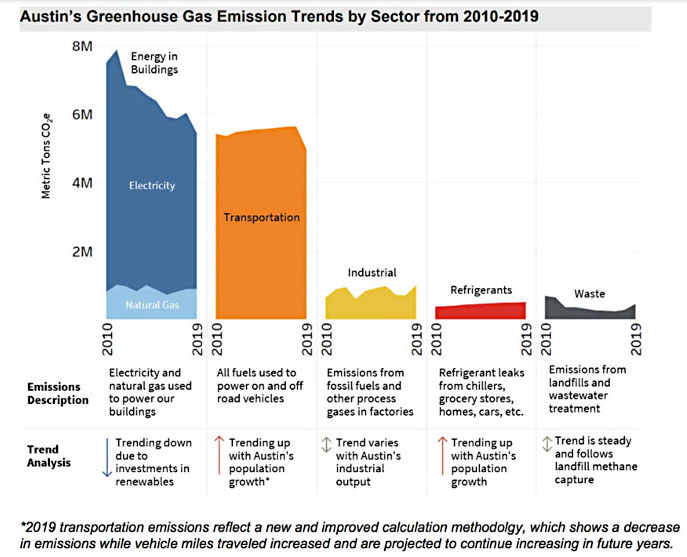 City Council is set to adopt a Climate Equity Plan today, Sept. 30, that would move up the target date for effectively emitting zero greenhouse gases to 2040 – 10 years earlier than when Austin's net-zero emissions goal was adopted in 2014.

Achieving that goal will require more aggressive efforts to reduce carbon emissions, which could cause disproportionate harm to Austin's Black and Latinx communities. City staff and community volunteers who crafted the plan made a conscious effort to prioritize equity when formulating the 17 goals to be met by 2030 and the strategies to ensure Austin remains on the path to net-zero emissions by 2040.

"The climate equity plan is a racial equity plan seeking to help address environmental racism and climate change," Shane John­son, an organizer with the Sierra Club and co-chair of the committee that helped draft the plan, told Council at its work session Tuesday, Sept. 29. "It should be a racial justice plan, and that is how we can address climate change."

An accelerated push toward net-zero emissions is warranted, the planners say, as Austinites increasingly recognize that we are already living in a climate crisis and that the cascading catastrophes it has caused will only worsen. In 2019, Council joined other cities around the world in declaring a climate emergency and committing further resources to reduce emissions.

In Austin, the two largest sources of carbon emissions are electricity generation and transportation. Over the past decade, as Austin Energy has increasingly relied on renewable sources for power generation, the city's emissions from electricity have trended down. The utility plans for 100% of power to be generated from carbon-free sources by 2035; in 2020, the number was 66%. Transportation emissions, however, have trended up, and "will soon become the largest contributor to our community's greenhouse gas emissions," the plan reads, "and therefore the most critical factor to reaching our climate plan goals."

To that end, the Climate Equity Plan refers back to the Austin Strategic Mobility Plan, adopted in 2019, and its overarching goal of "50-50 mode share" – meaning only 50% of Austin's commuters drive to work alone in their personal vehicles, with the other 50% commuting via transit, foot or bicycle, carpooling, or remote working. In 2019, 74% of Austin's commuters drove alone; the climate plan points to the importance of Project Connect and its major upgrades to Austin's transit system.

Transportation “will soon become the largest contributor to our community’s greenhouse gas emissions, and therefore the most critical factor to reaching our climate plan goals.” – From the draft Climate Equity Plan

Beyond that, the planners urge that city leaders promote higher-density development that is less auto-dependent, but don't offer many concrete strategies on how to do that. In fact, the report notes that the committee's Transportation and Land Use Advisory Group declined to offer any recommendations for reforming Austin's Land Development Code due to "ongoing" (in reality, paused for more than a year) Council discussions.

Thus, policy ideas that are gaining steam across the nation as necessary responses to the climate crisis (and to the affordability crisis in booming cities like Austin), such as eliminating parking requirements, are not addressed in the plan. It does, however, recommend phasing out free parking spaces at employers located within one half mile of the "transit priority network" outlined in the ASMP.

Other transportation and land use recommendations include adopting "complete community" plans, akin to the neighborhood plans of the past several decades, with a new emphasis on reversing "historical and racist impacts on areas experiencing displacement" and preserving neighborhoods of color. The plan also incorporates the goal of 135,000 housing units preserved or produced by 2027 from the city's Strategic Housing Blueprint.

In a more concrete move that could reduce transportation emissions, Mayor Steve Adler and eight council members have signed a letter to the Texas Depart­ment of Transportation urging the agency to consider alternative recommendations as it plans to reconstruct (and add two "managed" lanes to) Interstate 35 through the city center, what TxDOT calls the Capital Express Central project. The letter, which was signed by all CMs except Mackenzie Kelly as the Chronicle went to press Wednesday, Sept. 29, asks TxDOT to consider: new funding strategies for caps and stitches over the to-be­-depressed mainlanes, in order to link Central and East Austin; future use of the managed lanes as tolled or transit-only; minimizing the new I-35 right of way to displace fewer property owners; and perhaps delaying I-35 construction, set to begin in 2025, to avoid conflicts with the buildout of Project Connect's Orange and Blue Lines, currently slated to begin in 2024.

It's unclear how receptive TxDOT will be to these asks, but at least Council is taking a stand against a plan that TxDOT's own engineers admit will not reduce traffic congestion. "We agree with the community that the current proposal does not meet the needs of our City," the letter reads. "We need to see substantial changes to address these concerns in order to lend our support."