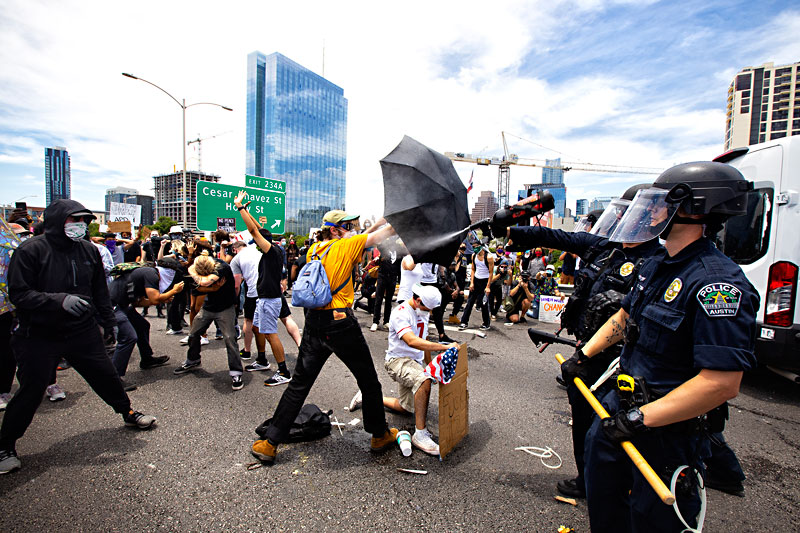 Protesters and APD clash during the May 30-31 Black Lives Matter protests last year. APD's after-action report reviewing its response to the protests hasn't been made public. (Photo by Jana Birchum)

The Austin Police Department has completed "several drafts" of an after-action report reviewing the department's response to last summer's Black Lives Matter demonstrations in Downtown Austin, but the city does not want to make the report public, claiming this could hamper the police response to "large protests, riots, or other acts of civil disobedience that might occur in the future."

The Chronicle filed a public information request with APD on July 30 asking for the report and emails between Lt. Steve Jones, who works with the department's Special Events Unit and was tasked with spearheading the review of the 2020 protest response, and former Police Chief Brian Manley and incoming Joseph Chacon. However, the city legal department has asked Texas Attorney General Ken Paxton for permission to withhold most of the records (some, unrelated to the after­-action report, were provided to us Sept. 21).ç

Regarding the after-action report, the city's legal team argued it "could be used by terrorists or other criminal actors to identify vulnerabilities in the department's response to emergency situations and disasters."

At a Monday, Sept. 20 meeting of the City Council Public Safety Committee, Office of Police Oversight Director Farah Musca­din reported that her office referred 202 unique complaints about actions taken during the BLM protests to APD Internal Affairs, which only investigated 27 of them; another 21 complaints from within APD were all investigated. Many referrals were closed, Muscadin said, after preliminary review by an APD panel set up to handle the unprecedented number of complaints. As an example, the OPO director cited a protestor throwing a water bottle at an officer; because this was a "riotous act," the officer's response was deemed justified. "We don't believe the initial assessment conducted by IA is the equivalent of a full investigation," Muscadin said.

An OPO spokesperson told us that of the 48 complaints that IA investigated, 11 have resulted in disciplinary action and 12 resulted in exonerations of the officers involved. (In those cases, the details of the complaint cannot be made public.) One officer received a 10-day suspension, nine were ordered to attend up to five days of additional training, and one received an oral reprimand.

“We don’t believe the initial assessment conducted by IA is the equivalent of a full investigation.” – Police Oversight Director Farah Muscadin

Muscadin outlined for the committee the roadblocks her office encountered while trying to participate in the investigation of each complaint, as OPO is authorized to do via the meet-and-confer agreement between the city and the Austin Police Association. "We had difficulty getting access to investigatory materials," Muscadin said. "We learned the department had a separate system they were inputting information relating to protest investigations into that we didn't have access to."

APA President Ken Casaday – himself exonerated for pepper-spraying a protester – praised APD's internal investigative efforts, noting that officers had to be pulled off patrol and from other units to staff the complaint panel. He also filed a public information request for the after-action report, which was denied. "We want to see it because we feel officers used defective bean bags and they are facing prosecution, not the department," Casaday told us. The theory, not proven, is that the lead-pellet munitions officers fired at protesters were hardened due to their age and from poor storage, making them more dangerous. "If there is truth to the bean bags being defective, then officers should be absolved of wrongdoing."

At least 16 APD officers still face potential criminal charges related to the protests; a new grand jury, to be convened in October, is expected to consider cases presented by the Travis County District Attorney's Office Civil Rights Unit. As any such trials – and the ongoing civil suits brought by survivors (see p.12) – won't be resolved for a while, the after-action report would be a valuable piece of information for Council and the community to see and understand now. For example, the OPO's recommendations for moving forward include semi-annual crowd control training and ensuring that officers' names and badge numbers are visible even when wearing tactical gear for crowd control. APD Chief of Staff Troy Gay said the department would provide written responses to the recommendations at a future meeting.

"An after-action report would only really be complete if you're addressing issues raised today," said Council Member Greg Casar at Monday's meeting, such as how decisions were made to use lead-pellet rounds and "how it was that those were used at [dangerous] elevations and distances." Casar, who has reviewed the prior drafts of the report, added that APD should take a "real self-reflective look about why we wound up with so many complaints. ... The only way we can address these issues is if we talk about them publicly."

A version of this article appeared in print on September 24, 2021 with the headline: What Happened After Last Summer’s Black Lives Matter Protests? APD Won’t Say.