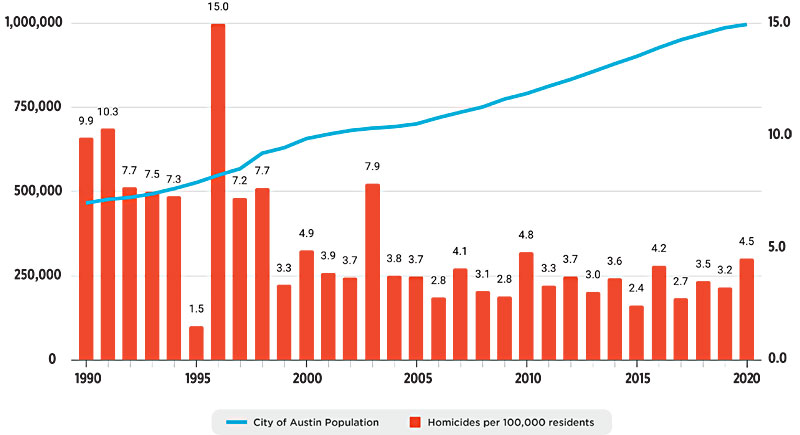 When the Chronicle first ran this chart, Save Austin Now was still gathering signatures to put its costly police staffing initiative on the ballot. At the time, we wrote: "The Fear-o-Meter is cranked up to 11, as SAN simply states as fact that Austin is in crime-wracked chaos, which gets repeated over and over by reporters who should know better." That election is coming up Nov. 2, so the Austin Police Association and the GOP operatives who run SAN are cranking the Fear-o-Meter up to 15 or so. So here we are again! As of Tuesday, Sept. 14, Austin has seen 60 homicides in 2021, the most since 1984, when the city had fewer than 400,000 residents. We officially had 961,855 residents a year ago, at the 2020 census, increasing at 2% a year, so now more than 980,000. That means the current murder rate is just under 6.0 per 100,000, compared to 15.0 per 100,000 in 1984. As a reminder, the SAN-backed Proposition A will, if approved, link the size of Austin's police force to the city's population, not its crime rate.