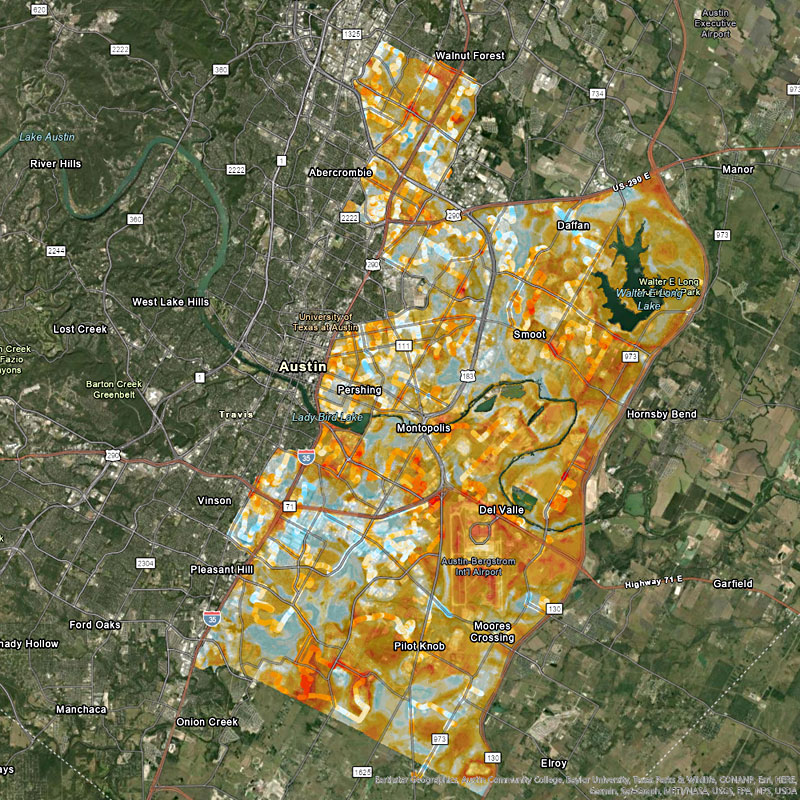 A map of East Austin's afternoon temperatures collected in August 2020 as part of the urban heat study that UT's Dr. Dev Niyogi helped pilot with the city and other partners. Blue denotes the coolest temperatures, while red denotes the hottest temperatures. (Image via Capa Straetgies, Heat Watch Austin)

For the past 20 years, heat waves have gradually worsened in Austin, with the number of triple-digit days steadily increasing. Climate scientists believe this upward swing in extreme heat is in part due to a "heat island" effect, in which urbanized communities become pockets of higher temperatures relative to outlying areas, as a result of several factors.

Dr. Dev Niyogi, a professor at UT-Austin's Jackson School of Geosciences and Cockrell School of Engineering, is working to better understand Austin's heat island effect as part of a collaborative study to identify which neighborhoods are feeling the extreme heat the most and find potential solutions. The project builds on a heat study Niyogi helped pilot last summer with the city's Office of Sustainability, UT Health Austin, and Go Austin/Vamos Austin in East Austin. Relying on NASA satellite data that showed a "very distinct" hot spot east of I-35, UT researchers and GAVA volunteers attached temperature sensors to their cars and drove around East Austin collecting on-the-ground data. This June, the study was one of only four urban heat projects chosen by the National Oceanic and Atmospheric Administration to receive a two-year grant.

Heat islands form for myriad reasons, including cities' abundance of black asphalt, which absorbs more of the sun's heat than natural landscapes, such as tree canopies, during the day and reemits the heat at night. Marc Coudert, environmental conservation program manager with the Office of Sustainability, says high nighttime temperatures can be as dangerous for humans as extreme daytime temperatures, posing a risk for heat-related deaths and illnesses since the human body can't cool down and recover. The effect can also contribute to air quality problems with elevated air pollutants, including ground-level ozone, which forms as a result of sunlight mixing with stagnant air to create smog. As Austin's hottest months – March-October – become hotter, the prevalence of ground­-level ozone will only increase.

The harmful impacts of Austin's heat island effect aren't felt equally citywide. Preliminary heat mapping last summer found that East Austin experiences the city's highest temperatures, likely due to the presence of more asphalt from the area's earlier designation as the city's industrial zone, home to the former tank farm and the Holly Power Plant. Certain communities are also less equipped to mitigate the effects of extreme heat, which researchers measure by "vulnerability mapping" the factors that make people more susceptible, such as residents who live alone or are non-native English speakers and might have difficulty accessing resources. On the other hand, higher incomes increase access to heat-mitigating resources like air conditioning.

"I think the important perspective is understanding cascading impacts and how poverty makes climate change a lot more severe," said Coudert. "What we lose in these maps and the satellite data is the lived experience."

The essential point of contact between the researchers and community members' lived experiences is GAVA, which is currently gauging residents' perception of heat in the study area. Frances Acuña, an organizer with GAVA, has so far conducted 20 interviews in the Rundberg, St. Johns, and North Lamar neighborhoods. Acuña said many residents have described heat exhaustion without recognizing it. "Many of their husbands are construction workers and they come home with all of these heat-related side effects. They get headaches, they're nauseous." GAVA is planning block-walking events to spread information so people can correctly identify and treat symptoms of heat-related illnesses, and aims to also involve residents in mitigation efforts such as tree-planting days. Residents are calling for more green space, as well as shade at bus stops, said Acuña.

Though the study is still in its information gathering phase, there are many existing cooling strategies to consider, encapsulated by C40, a coalition of 97 cities working toward sustainable growth, in its "Urban Cooling Toolbox." C40's suggestions for green infrastructure (trees, permeable pavement), blue infrastructure (drinking fountains, public pools), policy (cooling tax rebates, heat emergency response plans), and more could help guide Austin's construction boom in a cooler direction. Niyogi says computer models, like those used for the weather forecast, help play out different mitigation strategies, like light-colored or reflective coating on roads that could repel heat – a strategy that Los Angeles and San Antonio have already experimented with to varying results. Still, Niyogi emphasized the importance of individualized mitigation efforts. "Each city has a unique experience, so we can't just take their data and make our plans," he said. "It has to come out of this study."

Some cooling experiments could happen sooner than later, however, as Coudert plans for a surface coating pilot as early as next year and to start tree-planting strategies in October. But before any formal moves are made, it's important to "hear from people what they actually need, and not just assume," he said. Until then, UT, GAVA, and participating city departments conduct biweekly progress updates. "That is exactly what I call 'good science,'" said Niyogi. "There are passionate community people and willing and able policymakers all working together and saying, 'How can we make something better?' And in this case, it happens to be our city. We are all invested in that."