Neighbor: "This landfill should not be where it's sitting" 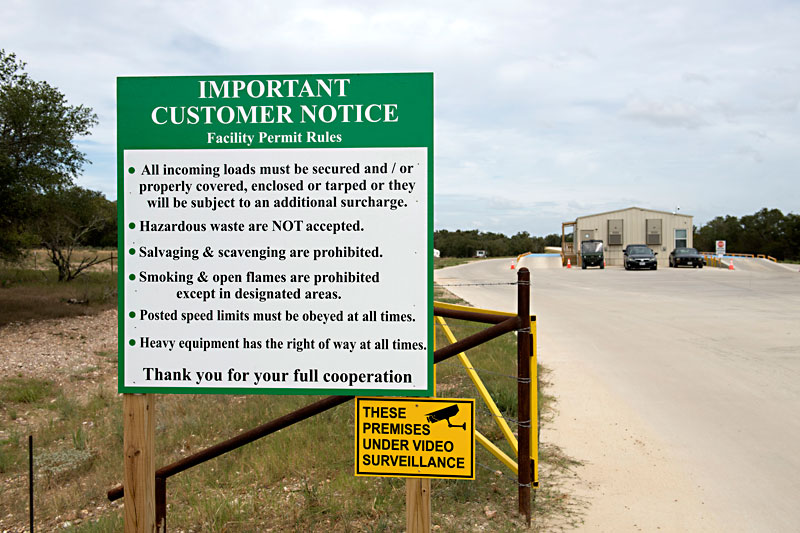 In 2013, when a Georgia waste company proposed a 17-story landfill in Caldwell Coun­ty near Lockhart, neighboring landowner Frank Sughrue contacted the Texas Com­mis­sion on Environmental Quality. He expected its support: "We're in the floodplain, it's in our water [supply, over the Carrizo-Wilcox Aquifer]. I said, you know, this is probably gonna be a five-minute conversation when you guys come out and take a site visit, because when you see where they're gonna put this thing, you're gonna go, 'You ain't putting a landfill here.'"

Eight years later, the 130 Environmental Park now sits, a municipal solid waste (MSW) landfill that opened to customers this May. Sugh­rue and other adjacent landowners teamed up with other stakeholders to try to keep the project from being built: local activists, organized as Environmental Pro­tec­tion in the Interest of Caldwell County; the owners of the nearby Texas Disposal Sys­tems landfill and other properties; and Caldwell County itself, which adopted an ordinance in 2013 aimed at prohibiting waste disposal at the site. This coalition challenged the 130 EP permit at TCEQ, which after two years of contested case hearings granted the final permit in September 2017. Then the opponents filed suit, lost that case in district court, then went to the 3rd Court of Appeals, which in late July upheld the decision that finally allowed 130 EP to operate.

Throughout, the opponents have expressed the same concerns Sughrue did eight years ago, about 130 EP's close proximity to the 100-year floodplain of Plum Creek and to the Leona Aquifer and Carrizo-Wilcox Aquifer recharge zones. In a contested case hearing in 2015 and again in district court, they argued that 130 EP's geologist's testimony – which included that the site has "less groundwater than any other [MSW landfill] site he has worked on" – should be thrown out, as he had discarded crucial boring tests that are required for a permit application, and thus his results can't be verified. They also challenged the agency's determination and lower court's ruling that the 130 EP project was grandfathered and not subject to the Caldwell County disposal ordinance, adopted in 2013 while the landfill owners' TCEQ permit application was still incomplete.

Sughrue noted the distance between the property line and the boundary of the landfill, an area crossed by trucks "that are going into this waste, and [getting] gunk on the tires. You basically have to ... cross the floodplain to get to [the wheel wash station], so if it comes off the truck onto the pavement, heavy rains will then put it in these two floodplain creeks, which then run down to Plum Creek." The Plum Creek Conservation Dis­trict registered similar concerns about runoff during the prolonged permitting process.

There have also been concerns that 130 EP hasn't properly planned for a major storm event, which could overwhelm the nearby downstream Soil Conservation Service Site 21 dam, a "high-hazard" dam where "failure or mis-operation of the dam is expected to result in the loss of human life," according to Caldwell County's 2017 objections to the permit. In response, 130 EP cites TCEQ's decision that the project would have a "negligible" impact on the dam and its reservoir, which the 3rd Court wrote in its opinion appeared to be "reasonably supported by the record."

"It's aggravating to go through that, and then have it happen [anyway] when you think that TCEQ is there for us," says Sughrue. "This" – the site and its runoff – "is in our water, guys. Your own permit says it, the borings show it, and the TCEQ allowed it. That's my whole fight, is this landfill should not be where it's sitting."