A look at the many roads not taken 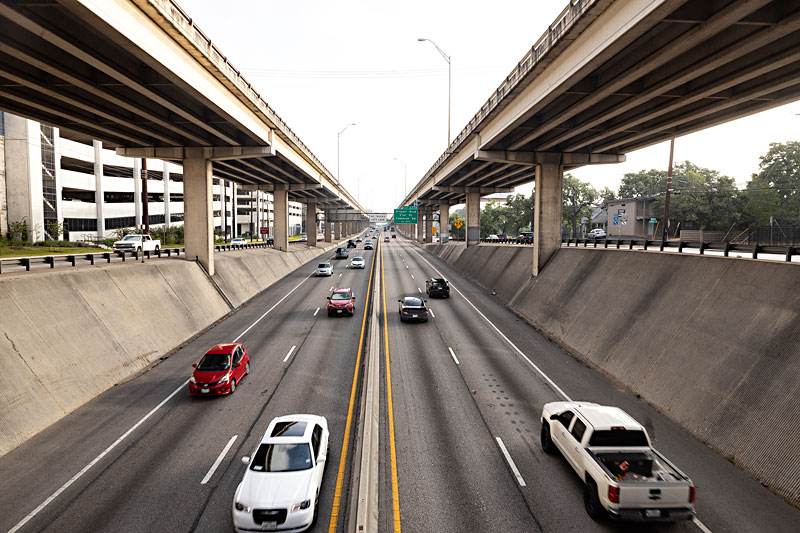 If you're looking at this story, thinking, "OMG, not more about I-35," and preparing to close your eyes/turn the page/close the tab ... before you do, please make a plan (just like voting!) to submit your comments to the Texas Department of Transportation at its "virtual public meeting" for what it calls the Capital Express Central project before Sept. 24. That's two weeks from now. You've got time to tell TxDOT what you think and want.

As the agency plans a multibillion-dollar rebuild of the interstate dividing Austin – the 8-mile stretch between U.S. 290 East (the Manor Expressway) and U.S. 290 West (Ben White Boulevard) – the comments it receives now must, under federal law, be addressed in its upcoming environmental review. That will be submitted in draft form in 18 months or so, receive more mandated public input, and then get wrapped up with a bow, likely by the end of 2023. (The rest of I-35 in Travis County – the smaller-scale Capital Express North and South projects, costing about $700 million combined – went through a streamlined review process and should begin construction in 2022.)

Will TxDOT address the comments it receives to everyone's satisfaction? Prob­ably not! But there are real risks for blowing the public off too hard; the agency can get sued, or the feds can intervene, both happening now in Houston over TxDOT's proposed I-45 rebuild north of the city center. That project is strongly supported by suburban interests over the objections of urban stakeholders who feel steamrolled by what they see as a sham process that's violated their civil rights. Pending a resolution, the agency and Texas Trans­port­ation Com­mis­sion have threatened to postpone or cancel the project and reallocate its funding, which is not what either side really wants but is a more amenable outcome to I-45's critics than its backers.

Likewise here, community advocates, City Council members, and this newspaper have all posited that the "no-build" alternative – which by law has to be evaluated during the upcoming months of study – would be preferable to the two CapExCentral alternatives TxDOT has left in play. Both of those include adding two "managed lanes" (high-occupancy, but not tolled or transit-only, so "managed" is a bit of a stretch) in each direction; removing the unsafe upper deck between Airport Boulevard and Manor Road; depressing the mainlanes through Downtown with the possibility of building "deck plazas" above them; and reconfiguring everything else.

There are minor differences between the two alternatives in how they stack the lanes at Airport (crossing the Capital Metro railroad tracks) and at Woodland Avenue south of the river. To accomplish either alternative, TxDOT has estimated it will need to acquire 30 to 32 acres of new right-of-way, impacting 35-40% of the parcels that flank I-35 along the 8-mile project area, and displacing just under 150 homes and businesses. (One of those properties belongs to the Chronicle.)

Are These Our Only Choices?

There was a third alternative considered by TxDOT, which involved tunneling the new lanes below the rest, which it has now abandoned as being too difficult, too expensive ($8 billion, double its estimate for the other two), too time-consuming to build, and too challenging for emergency vehicles in regards to access and response time. Those would all be more compelling justifications to community stakeholders if this alternative were not the one TxDOT itself had more or less promised to pursue – sloganized as "no wider and no higher" not by I-35 detractors but by TTC Chair J. Bruce Bugg Jr. himself. Instead, we are told that alternatives that are wider, and in places higher, are the best that can be done.

There are community visions for I-35 reconstruction, or deconstruction, that go far beyond the now-abandoned Alternative 1 (see examples here). Though these have been around for a while, TxDOT and its brain trust at Texas A&M's Texas Transportation Institute gave them a look only in the last few weeks, one of many ways the agency says it is responding to community input and going above and beyond. It found them unworkable, which is probably inevitable, but that doesn't mean they cannot be further considered during environmental review if TxDOT's feet continue to be held to the fire through your comments now (before Sept. 24, don't forget!) and through political pressure after.

“No wider and no higher” was sloganized not by I-35 detractors but by Texas Transportation Commission Chair J. Bruce Bugg Jr. himself.

Local stakeholders and people in power have pushed I-35 reconstruction forward through literally decades of fruitless debate and circular analysis and TxDOT wanting to do almost anything else. This was only partly to do something about traffic, bad as it is in Austin, but it's even less so now because nobody, not even TxDOT, really believes adding two "managed" lanes on either side is going to erase I-35 gridlock.

There's a reason why Austin voters were quite ready to approve spending $7 billion of their own money on the Project Connect transit plan, but are looking askance at spending two-thirds that amount of the state's money on an I-35 rebuild. The former is, as they say in mobility circles, "congestion proof" and creates whole new travel and land-use patterns, while the latter, as we have seen happen with other highway projects, will inevitably fill up with new cars going the same old ways just a tiny bit faster.

As the region continues to grow a lot faster than most of Ame­rica, it becomes clearer by the day, particularly to our new arrivals, how limited the upside potential is for improving I-35's performance, how extensive the hot-mess potential of a few years of major construction through the middle of town might be, and how maybe this whole deal deserves a fresh look and maybe a few more years to firm up, especially if "Build Back Better" infrastructure funds are about to rain upon us from D.C. The TxDOT alternatives analysis reflects these low opportunity/high constraint realities, dropping Alternative 1 like it's hot and hoping that only 150 displaced homes and businesses won't seem so bad.

So why do it at all? For TxDOT, this is their job, and they're engineers, and a lot of money (that goes to consultants and, down the road apiece, construction firms) is at stake. Austin's reasons are different. It's a widely held mainstream belief that I-35 is a toxic and dangerous expression of (infra)structural racism that has done and continues to do damage to this city. Again, even TxDOT concedes this to an extent. The fact that other cities across the nation have succeeded in removing their obsolete and unloved urban freeways, or covering and capping them with new useful and beloved urban spaces, makes it even more depressing that TxDOT thinks doing so here would be too hard.

What's the Cost of Nothing?

In fact, it's such a widely held belief that I-35 is bad for Austin that some local folks who worked really hard to keep up momentum and find the funding to pay for CapExCentral are quite troubled at how stridently people and organizations like the Chronicle are telling y'all that doing nothing would be a better alternative. If it's racist and unjust and people are being killed and maimed and poisoned and the upper deck's going to fall down at any moment and all the rest, how can we say, "Oh, never mind"?

This is an honest concern, and would be more compelling if TxDOT were taking all of those things more seriously in its planning. The expressed rationale for CapExCentral – the "purpose and need" against which alternatives are evaluated – has three main elements: 1) improving safety along the corridor, 2) improving "operational efficiency" (travel times, capacity, costs), and 3) "creating a more dependable and consistent route for the traveling public" that isn't on the highway itself (e.g., by improving east-west connectivity or accommodating Project Connect). It does not, as we've complained, view fixing what I-35 has broken in Austin as part of the purpose and need for the project, despite TxDOT personnel's public agreement that fixing those things is important. They're just not more important than "operational efficiency."

For all of these, each of the three alternatives performs about the same, with varying degrees of improvement over no-build that may or may not be plausible. But none of these is being compared to scenarios where I-35 is made smaller or slower or removed entirely. Using TxDOT's current mindset, such scenarios would be even worse than no-build, because we would have to achieve certain preconditions – reducing travel demand, prioritizing alternate routes and modes, building an Invisible Fence to keep people from moving here, whatever – that are now beyond our reach.

The Reconnect Austin and Rethink35 visions come from the opposite direction – that making big, structural changes to I-35 will itself be the precursor to better land use and mobility choices. What are now inert stretches of concrete can become places that generate tax revenue and help pay for themselves. Conditions on and along the highway have already deteriorated to the point where being near or on or having access to I-35 is less attractive than being in those same locations without the highway next door. The opportunity costs of having I-35 where it is, as it is, for the last 60 years are immense. Imagine what they'll be for the 60 years to come.

Don’t forget! Sept. 24 is the deadline for your comments at capexcentral.mobility35openhouse.com/submit-a-comment.