Parade of horribles comes courtesy of the 87th Texas Legislature 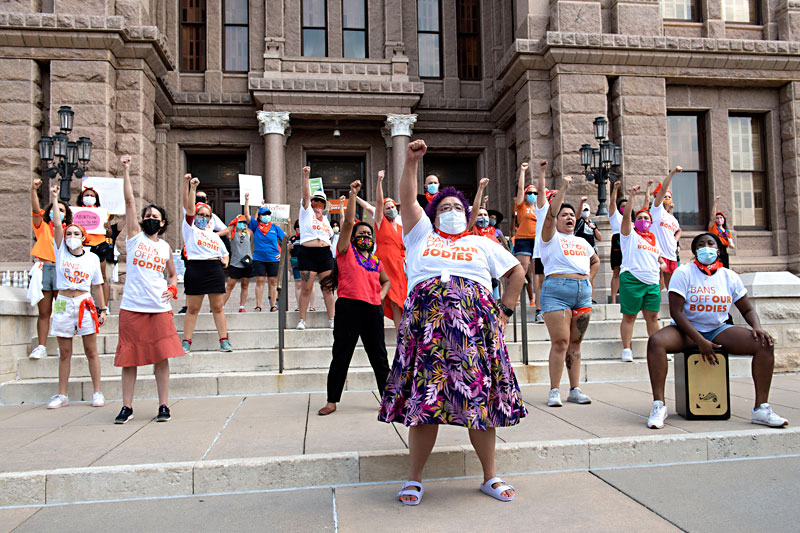 In odd-numbered years in Texas, Sep­tem­ber 1 – Wednesday, as the Chronicle went to press – is when most newly enacted bills take effect as laws. As the never-ending 87th Texas Legislature continues to churn up measures for Gov. Greg Abbott's signature, like the final "election integrity" bill passed on Tuesday after 10 weeks of resistance from Texas House Democrats, this biennial milestone had gotten a bit lost in the shuffle. That changed in just the past few days, as the political world realized Texas was set to overturn Roe v. Wade all by itself.

As we reported last week, abortion providers and supporters are preparing to weather the hurricane-force impact of Senate Bill 8. This makes abortion illegal after around six weeks of pregnancy, which in practice is a near-total ban; it's what jubilant anti-choice extremists call a "heartbeat law," even though an embryo at that stage does not have a heart. It's also completely at odds with Roe's protection of legal abortion care before fetal viability (in practice, at 20 weeks). The U.S. Supreme Court is preparing to hear a case challenging Mis­sis­sip­pi's 15-week ban, designed explicitly to upend Roe; either SCOTUS or the firmly anti-abortion 5th U.S. Circuit Court of Appeals could signal that SB 8 is a step too far, too fast, while that case is pending.

The abortion ban is just one of the 666 (c’mon now) measures that became real laws this week. Not all of them are dystopian!

But unlike similar measures in other states that have been blocked by courts in deference to Roe, SB 8's gimcrack scheme of civil enforcement means the state does not, and indeed cannot, enforce the ban, and thus can't be prevented from doing so by court order. Instead, an army of vigilante litigants, rewarded with a $10,000 bounty per case, has already assembled to pounce on anyone who "aids or abets" a suspected illegal abortion in Texas, including not just providers and support groups, but the friends and families of patients. So far, SCOTUS and 5CA have been able to do nothing, while preventing the lower courts from acting, and nobody is sure what happens next.

The abortion ban is just one of the 666 (c'mon now) measures that became real laws this week. Not all of them are dystopian! The state budget isn't that bad and more or less sustains the funding for public schools wrangled in 2019's less toxic climate. It's a little easier for poor seniors and Texans with disabilities to get food to eat via SNAP benefits. The state's stunted "compassionate use" medical cannabis program is now accessible to people with a broader range of conditions. And you can get cocktails to go now, which continues to make Greg Abbott happy every time he talks about it.

On the other hand, we now have permitless carry of firearms – pretty much any gun, concealed or not, in most any public place, as God intended. (A faint bit of good news: It's now simpler for private establishments to forbid unwanted guns on their premises, which now is just criminal trespassing.) Militant gun junkies, like anti-choice zealots, have long had the ear of the Texas Legislature, and this session's rush to appease the angry right-wing relics whose money and primary votes still control the Great State made it easy for the gun lovers to topple residual resistance to permitless carry from, most notably, the Texas law enforcement lobby. The latter, as Austinites know, got their own prize with the new law forbidding cities from "defunding the police," also taking effect this week.

The insatiable need of Fox News Nation for validation of its cracked worldview has also brought us new laws to address its transient moral panics, which are now embedded in statute to confuse future Texans. The hysterics over "critical race theory" have already been forgotten by The Base, which is now threatening school boards with violence over mask mandates instead. But Texas law now contains broad provisions to forbid teachers from discussing racism, and perhaps any "divisive" current issue, in ways that contradict MAGA orthodoxy. As with SB 8, the new rules could create opportunities for vigilante harassment and turning neighbor against neighbor, though Abbott and Lt. Gov. Dan Patrick think they're still not quite firm enough.

It is also now specifically forbidden to teach from the 1619 Project – The New York Times' groundbreaking exploration of slavery's central role in shaping American history. Instead, Texas is developing the 1836 Project, in which the state's hokey and fraudulent version of Texas exceptionalism, beginning at the Alamo, will be enshrined as official history.