Council Gets Briefed on Controversial I-35 Expansion Plans 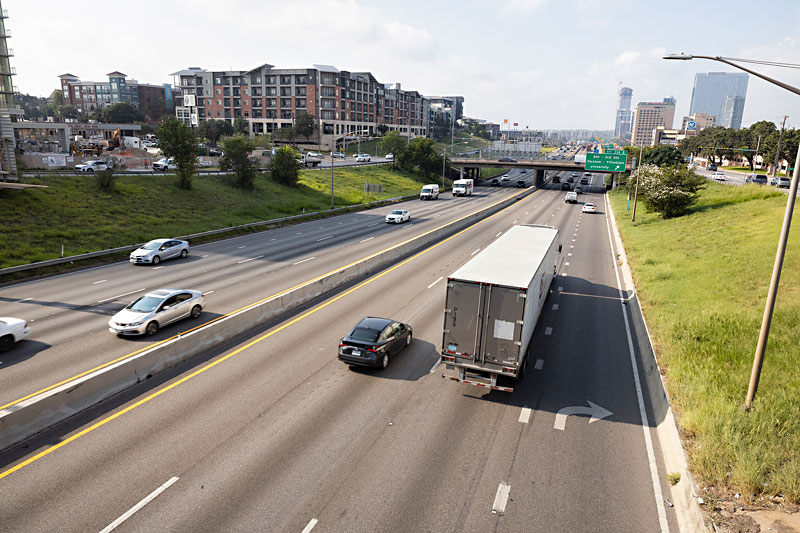 Interstate I-35, looking south from the 12th Street overpass (Photo by Jana Birchum)

Opposition to plans by the Texas Depart­ment of Transportation to widen I-35 through Central Austin – an eight-mile stretch between U.S. 290 East (the Manor Expressway) and U.S. 290 West (Ben White Boulevard) – garnered new focus from City Council this week. At Tuesday's work session, TxDOT and the Austin Transportation Department briefed Council on the latest alternatives being considered for what the state highway agency calls the Capital Express Central project, adding two "managed" (but not tolled or transit-only, at least not yet) lanes that TxDOT District Engineer Tucker Ferguson conceded would not do much to improve travel times on what is currently the state's most congested highway.

Ferguson's frank admission came in response to a question from Mayor Pro Tem Natasha Harper-Madison: "With our current growth projections, how long do you expect it to take for the new I-35 to become just as congested as the existing I-35?" It's become widely accepted among urban planners that highway expansion creates additional travel demand that will absorb any new road capacity.

"We're not pretending to say that the expansion that we're proposing is building our way out of congestion," Ferguson acknowledged. Then why is TxDOT planning to spend nearly $5 billion on the CapExCentral (out of $8 billion for the full Capital Express project, which includes northern and southern segments stretching to the county line in both directions), take around 150 properties that front the interstate via eminent domain if necessary, and tie up I-35 for a decade with extensive roadwork? Ferguson explained that the project is about "moving more people than vehicles" by creating the new high-occupancy vehicle lanes as an alternative for buses and carpools, as well as enhancing bike/pedestrian mobility through a shared-use path along the frontage roads and better east-west crossings of the highway.

Community coalitions such as Reconnect Austin, which has existed for more than a decade, and the newer Rethink 35 have proposed alternatives that would instead downsize the existing highway, which TxDOT considered in its latest analysis but has now dismissed almost entirely. Both alternatives would force too much traffic onto local streets, Ferguson said; he did not address the safety hazards created by I-35 now. According to city data, 40 pedestrians and cyclists have been killed over the past five years after trying to cross the highway's mainlanes or access roads; another 20 were seriously injured.

While Council members felt leaving I-35 untouched is not really a viable option, they voiced a range of objections to TxDOT's alternatives. Kathie Tovo, whose District 9 includes most of the properties that would be claimed as new right-of-way, noted that those include a number of local businesses that "employ lots of individuals in this community and serve a great purpose" – including the Stars Cafe, site of a Wednesday press conference by opponents of TxDOT's plans, and the Chronicle.

Tovo's colleagues raised various additional concerns, including how I-35 has been an instrument of segregation in Austin and an increasingly unsustainable way of moving people around. "Our community has shared that it wants to make sure that the project gets built in a way that is mindful of not only mobility needs, but also economic justice and climate change," said CM Paige Ellis, who chairs Council's Mobility Com­mit­tee and called for the work session briefing. Harper-Madison juxtaposed the negligible control that Austin has over the CapExCentral project with the similarly sized Project Connect transit plan, which has been co-created with Austinites for years, validated by a citywide vote, and includes specific measures to mitigate, rather than cause, displacement. While advocates successfully lobbied TxDOT to extend its current public comment period through Sept. 24, that will be the last real public engagement until the agency releases its draft environmental impact statement, two years from now, at which point the project plans will be fairly fixed.

Local officials have no real control over how TxDOT decides to execute the project, even though it lies entirely within the Austin city limits. "It's up to [TxDOT] to ultimately decide whether it did a good job and whether it should move forward," Harper-Madison said of the process, referring to a longstanding agreement between the agency and the Federal Highway Administration. "That's the kind of top-down process that gave infrastructure investment a bad reputation for their track record of tearing communities apart and displacing the underprivileged."

Ferguson said TxDOT has already responded to local concerns by going below grade Downtown, allowing for what the Downtown Austin Alliance and Urban Land Institute have proposed as a "cap-and-stitch" solution to create new public space over the sunken roadway. However, the agency says the CapExCentral budget doesn't cover cap-and-stitch, so the locals need to pay for it up front, before the project goes into procurement. That "doesn't seem right," Mayor Steve Adler said, adding that "it might be worth us waiting four or five years" to find more funds to ensure caps are an integral part of the project – as environmental review might call for them to be – and not an add-on "enhancement."

Houston is also battling a TxDOT highway expansion, of I-45, which has already gotten its final approval but which FHWA has put on hold, citing civil rights concerns that are also at the core of a lawsuit authorized in March by Harris County Judge Lina Hidalgo. In a bold move, the Texas Transportation Commission set a deadline for the feds – issuing a warning at the body's Aug. 31 meeting that FHWA had 90 days to wrap up its review of I-45's negative impacts on Black and Latinx communities, or else the commission could pull the plug on the project for at least the next few years. That move, issued just in time for the 2022 election cycle to begin in earnest, would be highly unpopular with Harris County suburbanites who have loudly demanded an I-45 rebuild, even if it harms urban-core communities of color. That same level of activism for an I-35 rebuild does not really exist in Austin's hinterlands – yet.

Individuals can weigh in on the Capital Express Central project online until Sept. 24.