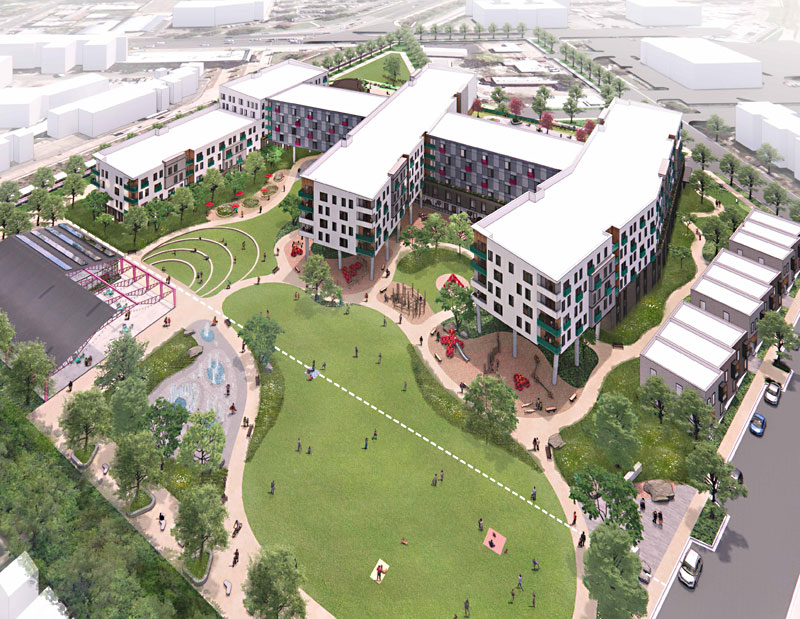 A parcel of land owned by Austin Energy near Crestview Station in North Central Austin, which the city has been eyeing as a promising site for new development for nearly a decade, is clearing a major hurdle today as City Council prepares to approve negotiations with developer 3423 Holdings to bring housing, parkland, retail space, and a transit plaza to the property at Ryan Drive and Justin Lane.

The Crestview Village proposal from 3423 Holdings includes 344 housing units; 165 of these would be rented to households at 60% or less of Austin's median family income (that's just under $60,000/year for four people), with some set aside for incomes as low as 30% MFI. Nine town­homes to be built by Habitat for Humanity would be for sale to buyers at 80% MFI or less. Most units will have two or three bedrooms and be geared toward working families, and affordability will be preserved for 40 years for the rental units and 99 years for the owned units.

When AE and the city began to consider redevelopment options for the property, which lies across the Capital MetroRail Red Line tracks from Crestview Station, neighbors asked that it become a park. Five years of engagement with the Crestview, Brent­wood, and Highland neighborhoods that surround the site, along with the residents and business owners at the Midtown Commons development at Crestview Station, produced a much different vision, but one that still includes a 3.2-acre park. That could grow to nearly 5 acres as 3423 Holdings, which owns property adjoining the AE site, negotiates with the city.

Their proposal, which scored highest among seven bids, also includes nearly 17,000 square feet of service and retail space, potentially to be used for health care or workspaces for artists (3423 Holdings aims to work with People's Community Clinic and the Austin Creative Alliance). Its transit plaza is intended to augment Crestview Station's existing footprint as Project Connect brings its light rail Orange Line and connecting bus services through the North Lamar/Airport intersection.

As there's broad agreement on this plan, the negotiation to come between the city and 3423 Holdings will focus largely on financing. The developer has offered two scenarios: The first, without any city subsidy, would include 120 market-rate rental units. The second scenario, which would require $5.9 million in city funding, would reduce that number to just 39 (about 11% of the total), with much larger numbers of units available at lower income levels. Under both financing options, at least 34 units would be reserved for people exiting homelessness, but that number could grow if a city subsidy is included. 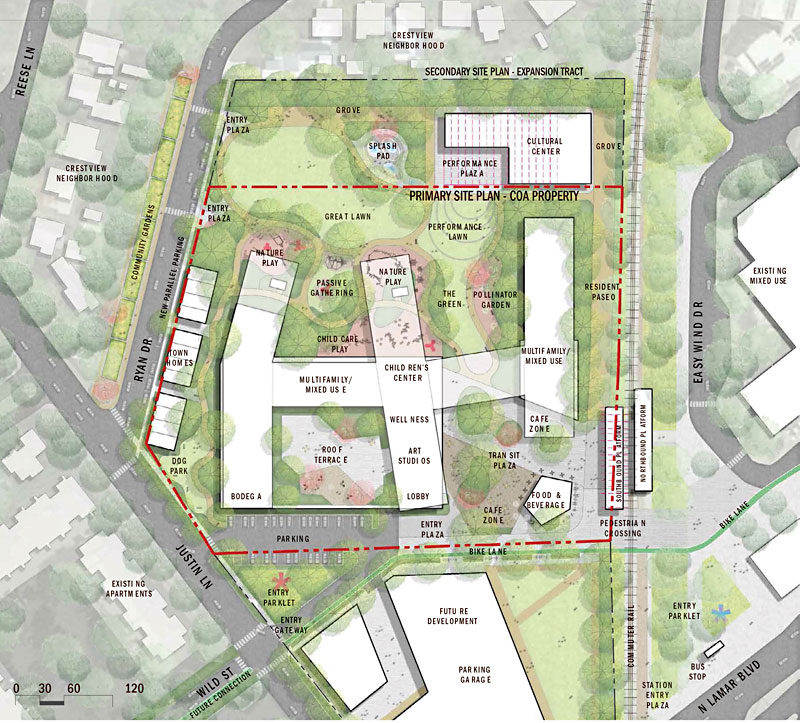 At Council's work session Tuesday, Aug. 24, Council Member Leslie Pool, whose District 7 includes the site, shared her enthusiastic support for the development and said she hoped the city could help subsidize the plan to produce more affordable housing. Pool is also asking staff to seek other possible benefits in the negotiations, including tenant protections, reduced parking, and ground-leasing the site (instead of selling it) to provide ongoing revenue for other city services, including housing vouchers.