Let there be masks 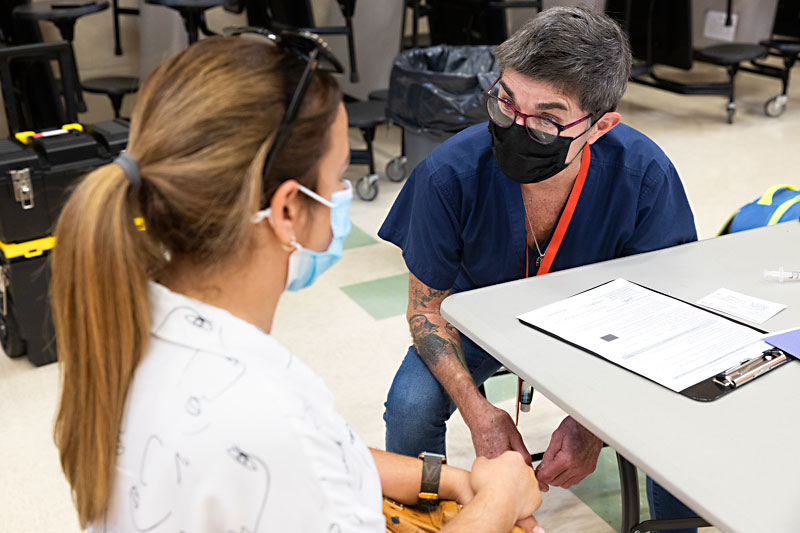 With on-campus learning having barely just begun for most Austin-area school districts, local health officials are already seeing the impact on COVID-19 numbers. "At this point we are seeing a surge in cases," said Health Authority Dr. Desmar Walkes at a joint briefing before City Council and Travis County Commissioners Court earlier this week.

Last fall, most campus reopenings were delayed for weeks in the wake of Texas' summer surge, and a statewide masking order was in place, so transmission among and within Central Texas schools was relatively low. This back-to-school season, that's not the case. In July and August, Austin Public Health has seen more COVID cases than ever before among patients 18 and younger, as fewer people wore masks during the summer and the highly transmissible Delta variant arrived in Austin. Between July 1 and August 22, 90 patients under 18 were hospitalized with COVID-19 in the five-county Austin metro area; nearly half of them were 12 and older, and thus vaccine-eligible. Of those 90 young people, 26 of them required intensive care; one remains on a ventilator. "Let me repeat: Masks stop the spread of COVID-19, so it's important that our children, who rely on us to protect them," are being sent to school with masks, Walkes said.

Masks are still mandatory in most local public schools, including Austin ISD and Austin Community College; the largest holdout district locally, Lake Travis ISD, is set to discuss the matter tonight at what's expected to be a highly contentious board session. Legal challenges continue to Gov. Greg Abbott's executive order banning such mandates, which the Texas Education Agency is not enforcing while the courts decide. The existing restraining order issued by District Judge Jan Soifer expires Sunday, and a coalition of Texas school districts and counties, as well as Travis County parents, is pressing a separate lawsuit against the ban. District Judge Catherine Mauzy on Monday held a remote hearing in that case to consider a temporary injunction, at which Walkes testified.

These legal battles have taken on great urgency, as local hospitals are filled with (unvaccinated) COVID-19 patients like never before. On Tuesday, a record 646 patients were currently hospitalized in local hospitals because of COVID-19; existing ICU and ventilator patients have also reached all-time peak numbers. That's led to preparations for an alternate care site at the Travis County Exposition Center for patients needing less intensive treatment; a previous ACS at the Austin Convention Center was demobilized this spring as the local COVID crisis fleetingly abated.

Still, Walkes said, the focus remains on boosting staffing at local hospitals first, as further details about the ACS are worked out. "This situation is very surreal because what is happening in our hospitals is very, very concerning," said Walkes. "And what's happening outside the walls of the hospitals is very much, in many instances, business as usual."

Recent federal decisions, including the recommendation for third-dose booster shots for the vaccinated and the U.S. Food and Drug Administration's full approval of the Pfizer vaccine, have raised anxieties in the community and among elected officials that Austin won't be ready to meet growing demand for vaccines. Right now, immunocompromised individuals, such as those receiving chemotherapy, who've received both doses of the Pfizer or Moderna vaccines are eligible for boosters; the general public will be eligible beginning Sept. 20. The booster is recommended to be administered eight months after the second dose.

Unlike the strained and uneven rollout of vaccinations earlier this year – when APH was more or less the only provider for all of Travis County – vaccines and boosters should be readily available in the fall, APH interim Director Adrienne Sturrup told council members and commissioners. "Because there are multiple providers in the community – and for the boosters APH is not required to serve as a hub provider – we are not expecting the same type of mad rush for our services as we saw in January."