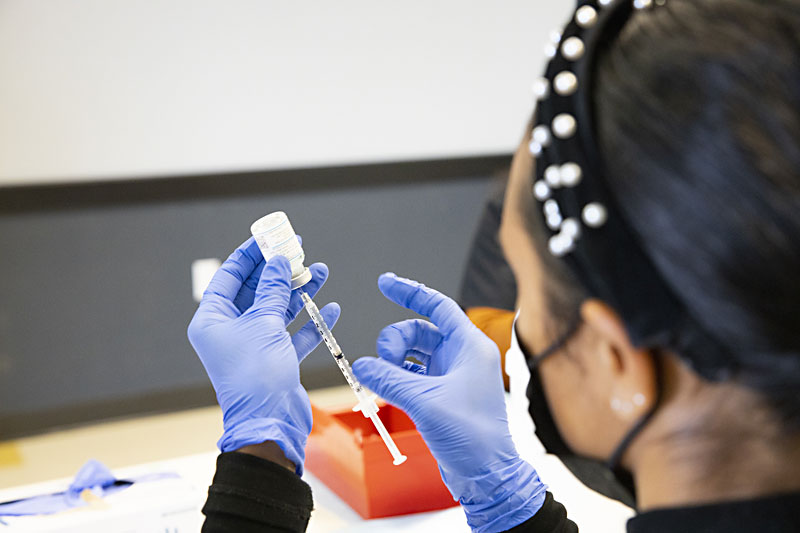 By the time you're reading this, there's a chance there are no more intensive care unit beds available in the Central Texas region. As of Monday, Aug. 9, the Department of State Health Services reported an all-time low of only two such beds available for Trauma Service Area O, which includes the five-county Austin metro area and six neighboring counties. The grim statistic follows local health officials' decision last week to move Austin and Travis County into Stage 5, the highest level of the local COVID-19 Risk-Based Guidelines.

Partially vaccinated and unvaccinated people are straining hospitals throughout Texas, not just in Austin. A little more than 53% of vaccine-eligible Texans ages 12 and up are fully vaxxed; in Travis County, it's 64%. Between July 26 and Aug. 8, unvaccinated patients made up 81% of COVID-19 hospital admissions in the five-county metro area. According to DSHS data, COVID-19 patients account for 16% of Texas' entire hospital capacity, and 14-15% of TSA-O's capacity.

Austin's ICU capacity is constrained by a lack of staff, rather than a lack of space, explained Health Authority Dr. Desmar Walkes at a joint briefing on COVID before the Travis County Commissioners Court and Austin City Council earlier this week. "There are people that are waiting for beds in ICU, in emergency rooms, because we don't have enough staff to expand our ICU capacity," she said, adding that this is true across the country in the midst of another deadly surge. As health care workers and medical providers find themselves in their 19th month of responding to a global pandemic, some elect to retire or shift careers.

“There are people that are waiting for beds in ICU, in emergency rooms, because we don’t have enough staff to expand our ICU capacity.”– Health Authority Dr. Desmar Walkes

With the staffing currently available, Austin Public Health has set local ICU capacity at 200 beds. There were 188 COVID patients in those beds as of Aug. 9, down from an all-time high of 191 the day before. Only four weeks ago there were 49 COVID patients in those beds; from July 13 through Aug. 10, ICU admissions for COVID increased by 284%, and hospital admissions as a whole increased 359%. "We've been able in the past to accept transfers from other cities and out of state," Walkes noted, "and now because we're taking care of people in our community at this level, we don't have the ability to accept transfers."

That's about all the help the state has offered to local governments and agencies trying to respond to the pandemic. Under Abbott's GA-38 executive order, state and local entities are barred from requiring vaccinations and face masks. Earlier this week, Dallas County Judge Clay Jenkins was sued by County Commissioner J.J. Koch for requiring masks in their chambers. (Koch, the only Republican on the commissioners court, was escorted out by security, holding his mask in his hand.) Jenkins immediately filed a counterclaim and, along with a dozen Dallas parents, sought a restraining order to block Abbott's GA-38 provisions as an illegal infringement on his and other local officials' powers to respond to imminent threats to public safety. Late Tuesday evening, Jenkins prevailed, as a district judge agreed that "the citizens of Dallas County have and will continue to be damaged and injured by Gov. Abbott's conduct." Several Texas school districts, including Austin ISD (see below), have also defied the governor and plan to enforce mask requirements for students, teachers, and staff when the 2021-22 school year begins next week.

This is the second time the Austin area has officially entered Stage 5, following the dramatic surge in early January. Under the revised Stage 5 guidelines released last week, high-risk vaccinated people are strongly discouraged from attending indoor or outdoor private gatherings, with or without prevention measures such as social distancing, and shopping should be takeaway or curbside. Nonessential travel is discouraged for high-risk people, who APH also recommends should dine outdoors with precautions like face masks. For low-risk vaccinated people, health officials recommend they wear face masks when attending all indoor or outdoor private gatherings, traveling, and shopping. They should also wear a mask while dining outdoors.

Additional protective methods are recommended for unvaccinated or partially vaccinated people, who under Stage 5 are strongly discouraged from private gatherings of any kind, as well as traveling (both essential and nonessential). Dining and shopping should be curbside or takeaway.

A version of this article appeared in print on August 13, 2021 with the headline: And Then There Were Two