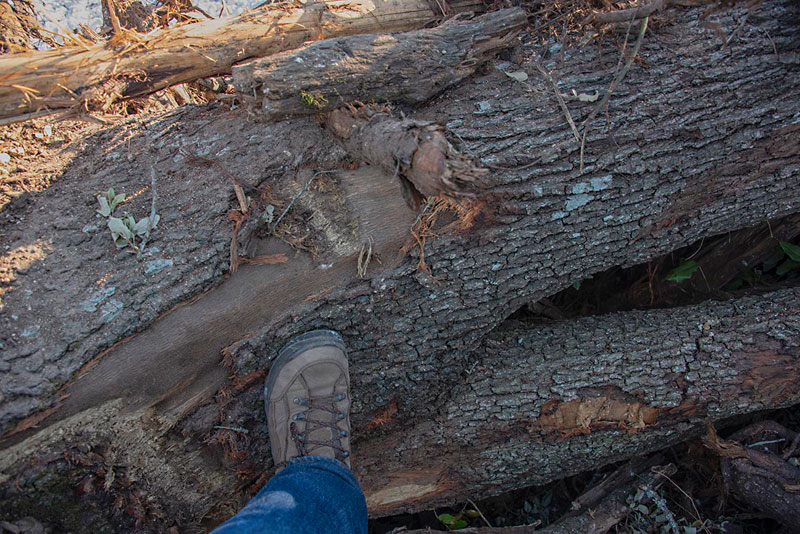 One of the trees downed in Oak Hill, where TxDOT claimed only trees under 8 inches were being taken down (Courtesy of SBCA)

The oaks in Oak Hill got a reprieve last week, as U.S. District Judge Robert Pitman instructed the Texas Department of Transportation to stop tree removal for their controversial Oak Hill Parkway, at least until he hears further legal arguments in a hearing scheduled for Sept. 2.

Several local residents and groups including the Save Barton Creek Association have sued TxDOT, asking for them to consider a less destructive and cheaper design alternative for rebuilding the Oak Hill Y – an at-grade six-lane parkway with a local boulevard, bridged cross-streets, and a new greenbelt, instead of the 12-lane-with-flyovers megalith that TxDOT intends – in order to "fix the congestion at the intersection and leave the community and Oak Hill's namesake trees intact," as SBCA puts it. 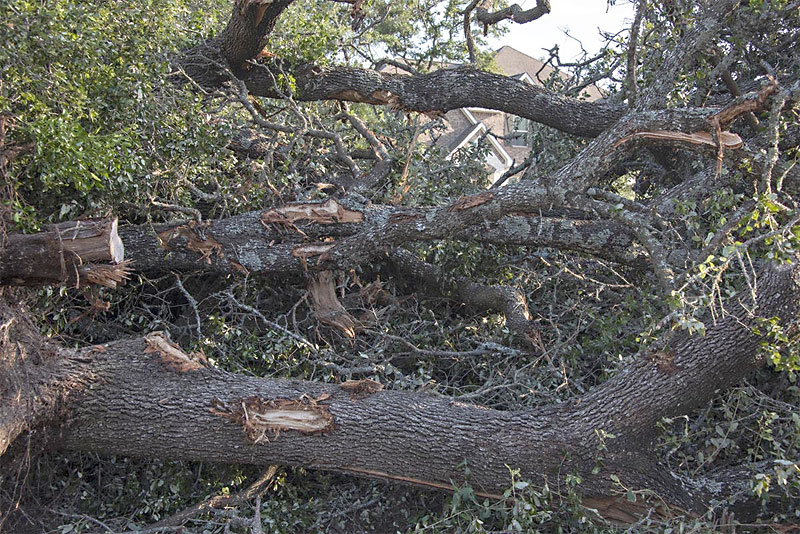 With the suit due to be heard in Pitman's court, plaintiffs asked for a temporary injunction to halt construction. During the hearing, TxDOT claimed that their contractors were not removing any trees greater than 8 inches in diameter, and when plaintiffs produced photos of numerous downed trees that were much larger, and appeared to range up to Protected status (19 inches and up), Pitman was apparently not pleased. He denied the injunction, but issued instructions not just protecting the 288 trees on the site that are identified as Protected, Heritage, and Legacy status, but forbidding TxDOT from removing any trees greater than 8 inches, and that afternoon the agency told their contractors to stop removing any trees whatsoever.

And that's where things stand at press time. Can the Fix290 Coalition really get TxDOT to seriously consider its alternate plan? Would it really provide the needed traffic fix they promise? Will TxDOT really stand down on a project that's already into the construction phase? Check back in September.

NB: This story originally said that Judge Pitman ordered TxDOT to stop the tree removal, and issued an injunction to that effect. In fact, the judge did not issue an order or injunction; instead he told TxDOT's attorneys that if any potentially protected trees were removed before the Sept. 2 hearing, he would “take a very dim view of the state's position” in making his ruling at that time.

Also this past week, the Austin Transportation Department started rolling out their "15% design" – indicating that 15% of the planning is done for the massive Project Connect transit plan, which most notably includes the ambitious Blue and Orange rail lines, a Downtown subway system, a new tunnel and bridge across Lady Bird Lake, and the long-awaited train to the airport. But if the overall vibe of Project Connect is still very much about a shiny new transit future, the "15% design" presentation does start to introduce some of the gritty trade-offs that are going to have to be made to get there.

One is the loss of an auto lane for pretty much the entire length of the rail route, but planners don't really consider that to be much of a loss. Presenters emphasize that City Council made its priorities clear in the strategic mobility plan, and the goal is to get people out of their cars and into alternate modes. So to that end, reducing the speed and convenience of auto travel isn't a loss at all; it's a feature. Light rail gets priority at intersections, and with a dedicated, curbed rail line in the median, left turns will be limited, and cars will have to be making a lot of U-turns. "Transit and throughput are the priorities," is a line I wrote down from one of the presentations.

Other rough edges clearly still need to be smoothed, though. There are a lot of changes to streetscapes that seem problematic in this draft: right-of-way that's currently sidewalk, for instance, slated to become shared-use bike-and-pedestrian, which isn't ideal for either. But it's a trade-off, and really, how bad is it? On the other hand, if the whole length of Guadalupe north of UT is going to be one-lane either way, someone asked, what happens if an emergency vehicle has to go through, and the answer was that they'd probably have to hop up onto that bike/ped sidewalk to pass. Hmmm. How bad is that?

"Everything's a matter of trade-offs," is another phrase I wrote down, and those are the kinds of trade-offs staff will take away from this round of feedback, to refine the plan for the next round. One key goal, in fact, is the "optimization of trade-offs" between the 15% and 30% plans.

There's a ridiculous amount of detail in the plan, and a ridiculous number of those trade-offs to be made, and to their credit Capital Metro and Project Connect have made a lot of it available to the public. Cap Metro's "Get Involved" page (capmetro.org/get-involved) has links to the open houses, "the latest updates to the Orange and Blue Line projects," including recordings of the presentations, and the working group breakout sessions focused on particular segments – eight for the Orange Line, running from Slaughter Lane to Tech Ridge, and four for the Blue Line, running from Downtown to the airport. Plus there are detailed schematics, down to the door-to-door level, for the full length of both routes, and you can provide feedback on any or all of this through August 27. So, get involved.

The 6th Annual Austin Soccer Awards Gala will be in-person next Thursday, Aug. 12 at the South Congress Hotel, "to gather and celebrate with our Austin soccer community." Speakers include Amobi Okugo, a stalwart for Austin Bold and founder of the financial-literacy platform A Frugal Athlete, plus awards for players, coaches, and referees of the year, and scholarship presentations. Get tickets at austinsoccerfoundation.org.

Austin FC's 4ATX Foundation is holding a soccer equipment drive, in partnership with Academy Sports + Outdoors: Donate new and lightly used equipment such as balls, cleats, shin guards, shorts and jerseys, or new, unused gloves, socks, and sports bras, outside the Zebra Gate at any of the next three games, Aug. 18, 21, and 29, to get a $5 gift certificate to Academy, and enter a drawing for an autographed Austin FC jersey and two Field Club seats to a future home match.