Will the beat go on? (Outside? Behind a mask?) 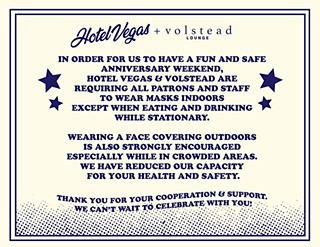 Among Austin's musicians, a harsh reality is beginning to set in. The post-vaccination period of cultural jubilation that had been roundly predicted to kick off a new "Roaring Twenties" feels like it's been suspended after just four months. The latest COVID-19 surge, involving the highly transmissible Delta variant, now threatens to upend the broad return of live music.

At this point, most musicians know a fellow performer or venue worker who's had a breakthrough infection. Band text threads – usually chains of inside jokes and attempts to schedule practice – have turned into discussions about whether or not to play upcoming concerts and under what conditions. Fans are messaging artists asking if the night's show will be inside or outside.

The actual impact, as of yet, remains subtle. A significant wave of cancellations has yet to hit, though several small indoor shows this week have had the plug pulled, either due to musicians being sick or out of concern for audience safety. Austin jazz redoubt the Elephant Room had been one of the last clubs to reopen, on June 22; it closed again two weeks later when a waitress tested positive for the virus, and has remained closed, citing local COVID-19 Risk-Based Guidelines. On Tuesday, Austin City Limits hosted Brandy Clark for a taping of the PBS show before a visibly smaller live audience than those of previous weeks. Hotel Vegas announced that its anniversary weekend programming would be at reduced capacity, with masks required indoors and recommended outdoors.

But the agony lies in the fear of what's coming. The existential domain of in-person live music was taken from Austin for more than a year; after this brief return, going back into semi-hibernation is a depressing prospect for musicians.

Kevin Russell feels arrogant for not heeding the warning signs. Lots of music colleagues had been getting sick in July. Then the Shinyribs frontman contracted COVID-19, he believes, from a fan at a concert. In quarantine, anger arose.

"I felt mad at myself for being so cavalier because I had all my faith in the vaccine," he admits. "And I was mad at other people who are, knowingly or not, walking around with a disease and spreading it to me. Then, basically having Godzilla inside me and not knowing what the fuck that means – that stress really rattled me, mentally."

At that time, Russell publicly rallied for concerts to ask for proof of vaccination, but then "came to understand that's not even legally possible in Texas." Now he says he's not going to play indoor shows until things are safer for his band and audience, a determination he'll make by paying attention to positivity rates in the community.

Pat Buchta, executive director of the nonprofit advocacy group Austin Texas Musicians, recently launched a petition in support of all Texas music venues requiring proof of vaccination to attend concerts without wearing a mask. Over 500 signatures have been garnered over a week's time. On Monday, Kerrville Folk Festival announced that attendees, volunteers, and performers over the age of 12 must show proof of vaccination in order to enter the October event.

Austin's largest music event is still on the horizon, and ACL Fest has yet to reveal what, if any, immunization requirements will be in place. ACL's sister event Lollapalooza, which transpired in Chicago last weekend, mandated vaccine cards or recent COVID-19 test results for attendees.

Buchta says vaccination stipulations would be optimal, but he's observed greater community consensus that venues should require masks at concerts. "Given the business climate and the governor's restrictions, vaccine cards just may not be a possibility, but we know masks work and everyone's been using them over the past year," he told the Chronicle this week. "I hope we can get back to that so we can keep the venue doors open."

Universal masking at shows would be a significant social adjustment. As of Tuesday night, concert crowds remained overwhelmingly unmasked.