Know Your Rights! The City Can Help

When City Council reallocated millions from Austin's police budget last summer, one of the primary beneficiaries was its newly created Office of Civil Rights. Many of last summer's shifts to the city's budget and organizational chart, which reshaped services ranging from anti-discrimination enforcement to the 911 call center, have been walked back in view of House Bill 1900, signed by Gov. Greg Abbott on June 1, which imposes penalties on cities that "defund the police." But the OCR is here to stay, and under the leadership of the city's first-ever Civil Rights Officer Carol Johnson, it's reaching out to Austinites with a series of know-your-rights Zoom sessions.

The OCR was founded last August to consolidate how the city handles education and enforcement of its local civil rights ordinances as well as Austinites' rights under state and federal law. Johnson, who came to Austin in February after an extensive career in similar roles in both Oregon and Arkan­sas, is leading the office's first major public information campaign this summer.

In the wake of 97 employment complaints and 34 housing complaints filed in 2020, the office's workshop series (still virtual as the COVID pandemic continues to wreak havoc) debuted in July with an introductory session on Austin's fair chance hiring policy; upcoming sessions in the next three months will dive deeper into what fair chance means for employers, as well as offer broader overviews on how to identify employment and housing discrimination.

The city's fair chance ordinance, adopted in 2016 after an activist campaign to "ban the box" (meaning the check box on job application forms), prohibits employers from screening out applicants with criminal histories, just as it's illegal under federal law to screen out applicants of a particular race or gender. Employers can conduct criminal background checks of prospective hires after a conditional offer has been made, but not before they've been selected. Similar laws exist in many cities and states; conservative Texas lawmakers have attempted for several sessions to strip cities of their power to enact such local ordinances but have not yet done so.

Fair chance violators are supposed to face fines, but in the two years after the ordinance was adopted, only five employment complaints were filed, none of which were investigated. That changed once the OCR was created, and the office hopes it will reach more Austinites with these workshops. "Through education and community outreach, we are working together to ensure racial and social equity for all Austinites," Johnson said.

The next OCR workshop, focused on employer responsibilities under fair chance and other civil rights laws, will be held via Zoom at 1pm Thu., Aug. 26. To register for upcoming workshops or to file a housing or employment discrimination complaint, go to austintexas.gov/department/office-civil-rights. 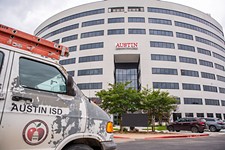