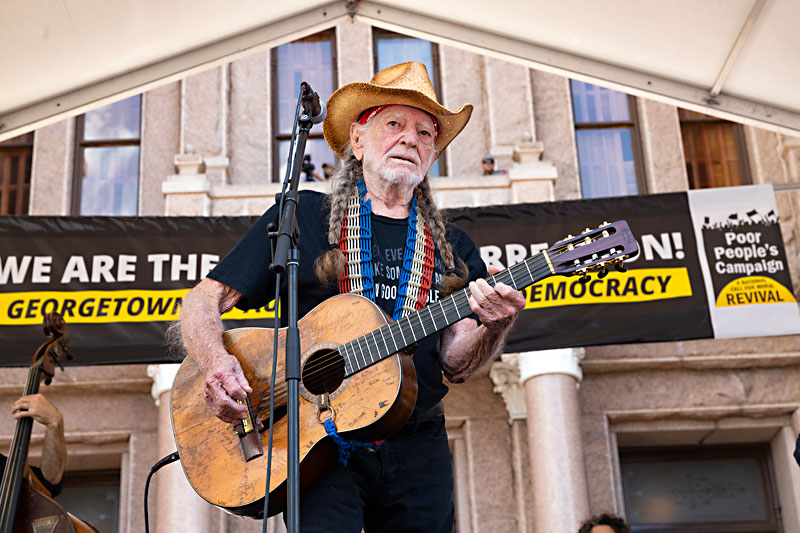 Country legend and people’s advocate Willie Nelson performed at a voting rights rally held Saturday at the Texas State Capitol. The rally was the culmination of the Moral March for Democracy, a 27-mile march from Georgetown to Austin inspired by the historic civil rights marches from Selma to Montgomery in 1965. (Photo by Jana Birchum)

Fend for Yourself, Apparently: On July 29, Gov. Greg Abbott issued an executive order that prohibits local authorities from instituting any COVID-19 safety precautions, including restaurant capacity limits and mask mandates at public schools. On Wednesday, Texas surpassed New York to become the state with the second-most COVID deaths in the nation. See story here.

Because Migrants Are the Problem? The U.S. Department of Justice sued Texas on Friday after Abbott ordered state troopers to pull over drivers transporting migrants "who pose a risk of carrying COVID-19 into Texas communities." Abbott's order has been interpreted as a call for racial profiling and an attempt to keep his conservative-bait border agenda in the news. On Tuesday, a federal judge issued a temporary restraining order blocking Abbott's directive.

To the Ballot Box We Go: After the city clerk affirmed that Save Austin Now had gathered enough signatures to qualify for the ballot, its initiative requiring minimum police staffing levels is likely headed to a Nov. 2 vote. The GOP-led and police union-funded political action committee has been accused of misleading Austinites to sign the petition with false claims.

Sixth Street Safety: City Council unanimously approved a resolution aimed at improving safety conditions along East Sixth Street, a popular nightlife and tourist destination. A cross-department team of city staff will study potential solutions; the two most controversial considerations are a juvenile curfew and opening the street to vehicular traffic on weekends. Staff will report back to Council in the fall with their findings.

A Different Approach? On Monday, the Public Safety Commission recommended that City Council direct Austin police to cease citations and arrests of those experiencing homelessness, part of the phased implementation of Proposition B's ban on public camping, also backed by Save Austin Now.

The Wheels on the Bus Won't Go Round: Facing a worker shortage that's impacted so many industries, Austin transit agency Capital Metro is in immediate need of bus operators and mechanics; a $3,500 signing bonus is available for some positions.

A Debt-Free Degree: A $450,000 gift from First United Methodist Church of Austin is being used to eliminate debt for students at Huston-Tillotson University; the historically Black college is Austin's oldest institution of higher learning. "I'm done talking about that issue."

– Save Austin Now co-founder and Travis County GOP Chairman Matt Mackowiak, asked by reporters if Save Austin Now misled people in order to garner signatures for its police staffing petition