Dems Dig In for a Long Stay in D.C. 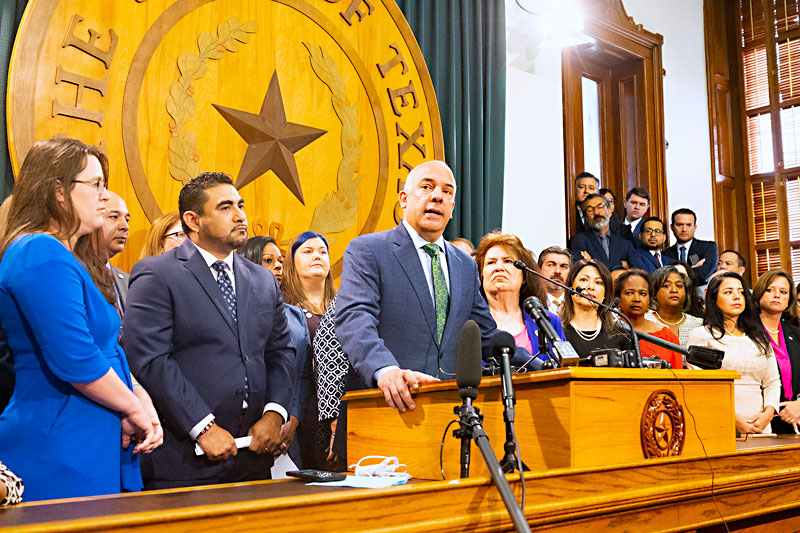 Texas House Democrats, led by Rep. Chris Turner (at podium), held a press conference at the Texas State Capitol on July 8. Days later 50 of the legislators fled to Washington, D.C. to break quorum over a restrictive voting bill. (Photo by Jana Birchum)

Texas Democrats are digging in for the long haul in Washington, D.C., as the group of quorum-breakers works to refine for a national audience its message – that "where Texas goes, the nation goes" when it comes to voting rights.

Getting to the nation's capital was the easy part. What's been harder for the 50-member delegation is dodging the coronavirus while developing a cogent agenda and juggling back-to-back meetings.

In the hot glare of the national spotlight, the Dems took a safe route with their early talking points about the need for congressional action to turn back "Jim Crow 2.0." But the COVID-19 outbreak among them, while not slowing them down that much in real life, has begun to step on their message. Houston Rep. Gene Wu has begun tangling with Tucker Carlson over the efficacy of COVID vaccinations, not voting rights. His fellow Hous­tonian Rep. Harold Dutton left D.C. altogether, then returned to Austin to avoid exposing his sister, who is undergoing chemotherapy. Austin Reps. Celia Israel and Donna Howard, two of the delegation's more adept media spokespeople, have contracted COVID despite being fully vaccinated. They and four other House Dems are in isolation and tell us their symptoms have been mild and are improving.

While that particular incoming arrow was unexpected, the Dems landed in D.C. without much preparation or support. "No war room was an early mistake," said veteran Aus­tin Democratic strategist Steven Rivas. "Without having experienced communications operatives working in the background, a lot gets lost. This is war, and we need to do better when battling GOP comms operatives."

Democrats are beginning to find their stride. They've met with civil rights leaders like Dolores Huerta. They've pleaded their case in high-profile meetings with Sens. Amy Klobuchar of Minnesota and Raphael Warnock of Georgia. MSNBC devoted an hour to the Texas Democrats on Monday night, with a town hall hosted by Washington Post columnist Jonathan Capehart. On Tuesday, heavyweight consultants and familiar commentators Donna Brazile, Jennifer Palmieri, and Kiki McLean counseled the delegation on messaging strategy via Zoom. On Wednesday their schedule included a meeting with Crystal Mason, the Ft. Worth woman sentenced to five years in prison for attempting to vote in 2016.

The dean of the House Dems, Houston Rep. Senfronia Thompson, who joined the Lege in 1972, has been one of the delegation's most powerful messengers.* During her Monday night appearance on MSNBC, Thompson talked passionately about her own grandmother being forced to pay a poll tax to vote in Texas. "There was a sign that said, 'No dogs. No Negroes. And no Mexicans,'" Thompson said.

"Ms. T" and her colleagues have made nuanced points about the current version of the GOP "election integrity" legislation. Cases like Mason's – who, not knowing she was ineligible to vote in Texas, cast a provisional ballot that was never counted – should simply not be illegal, let alone lead to prison time. Poll watchers might be okay, but not if they're given the broad latitude to intimidate voters. Consistent requirements for poll workers should not expose your 70-year-old precinct judge to a misdemeanor charge. Nor should the bill be so vague that people aren't sure if taking their grandmother to the polls is now a crime.

"There's a provision in the bill that essentially criminalizes voter assistance. This is the practice of helping your neighbor, helping your friend, helping your mom or your grandmother to vote," San Antonio Rep. Diego Bernal said on MSNBC on Monday night. "It creates trapdoors and trip wires."

House Dems have confirmed with the Chronicle and other Texas media their intention to stay until the 30-day special session expires the first week in August, which is also when Congress plans to go on recess. They're hoping that some core elements of the For the People Act and John Lewis Voting Rights Act can be crafted into legislation that's potentially viable by that deadline. Gov. Greg Abbott has pledged to call special sessions as long as necessary until he gets the bill he wants, although the political risk to him of doing so increases over time.

Brandon Rottinghaus, a political science professor at the University of Houston, predicts it might be best for Texas Dems to cut their losses and begin to compromise, especially given that the time frame for passing federal legislation is beginning to narrow. "They're in a reasonably good bargaining position now, so best to cut a deal," Rottinghaus said. "They've got strong media headwind after a week of saturation."

The Abbott-friendly Texas Supreme Court is weighing the Dems' motion to force the state to continue to fund the legislative branch, despite his veto of Article X of the biennial budget in June. A ruling in his favor might give Abbott less incentive to bargain, Rot­ting­haus said, and the coverage of Democrats with COVID could easily drift negative. "An agreement to vote on a Democratic priority or firm concessions to trim the sails of the voting bill where they find it to be most odious might let the Democrats save face and give Republicans the quorum they need for a dozen or so backed-up bills," he added.

Correction: Due to an editing error, this sentence originally indicated Thompson was the dean of the entire Texas House. We apologize for our unintentional erasure of Rep. Tom Craddick, R-Midland, who entered the Lege in 1969.