Can Rodney Reed Be Freed? 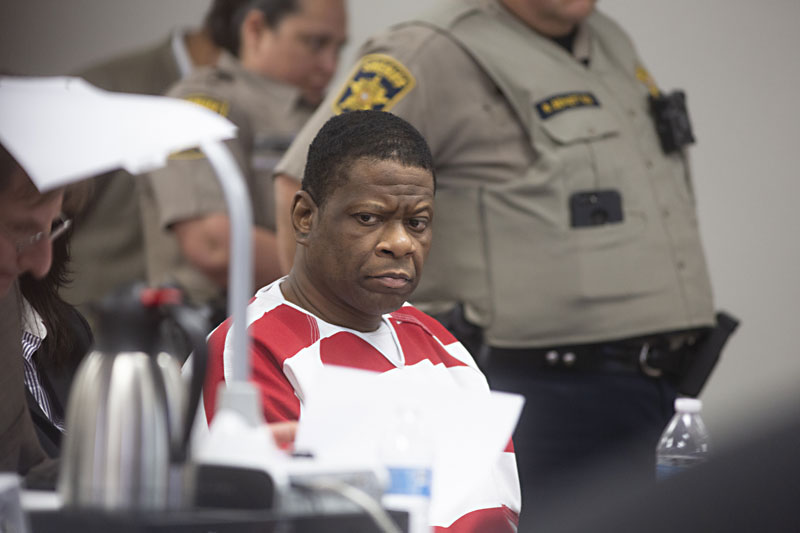 Rodney Reed in court in 2017 (Photo by Jana Birchum)

What may be Rodney Reed's last, best chance to gain a new trial and clear his name after 23 years on Texas' death row is now underway in Bastrop. On July 19, Reed's attorneys began presenting new evidence and witness testimony before Judge J.D. Langley, who will decide whether the case is persuasive enough to recommend a new trial for Reed, a Black man sentenced to die by an all-white jury in the same courthouse in 1998 for the rape and murder of 19-year-old Stacey Stites.

Since her death, many have suspected Stites was actually killed by her fiancé Jimmy Fennell, at the time a Giddings police officer. Nothing linked Reed to the crime except his semen found inside Stites' body. Reed claimed he and Stites had been having a secret affair, which was ridiculed at his trial and ignored by judges who have rejected his subsequent appeals over 20 years. In November 2019, Reed came within five days of death amid an outpouring of public support for his cause and global scorn of the Texas criminal justice system. The Texas Court of Criminal Appeals stayed Reed's execution and, citing persuasive evidence both of his innocence and of prosecutorial misconduct at trial, returned the case to the Bastrop trial court for "further development." This hearing, featuring the witnesses whose claims convinced the CCA (and, earlier, the Board of Pardons and Paroles), is the result.

“[Fennell] said in my presence, ‘You wouldn’t believe how easily a belt can break when you strangle a n----r-loving whore.’”– Former Aryan Brotherhood leader Arthur Snow

The state has always argued that Reed kidnapped and killed Stites between 3am and 5am as she drove to work from Giddings, where she lived with Fennell, to the H-E-B in Bastrop on the morning of April 23, 1996. They've also rebutted Reed's claim of an affair by insisting he and Stites did not know one another. Attorney Andrew MacRae, who has worked to free Reed for two decades, told the court in his opening statement that the new testimony will gut both of those claims and portray Fennell as eminently capable of murder.

His first witness was Dr. Andrew Baker, a forensic pathologist from Minneapolis, who told the court that crime scene video of Stites' body showed that it was not in rigor mortis when it was first examined – meaning she died some time around 10pm the previous night, when she was alone with Fennell. Assistant Attorney General Lisa Tan­ner, who worked alongside Bastrop District Attorney Charles Penick to prosecute Reed in 1998, spent hours cross-examining Baker but mostly avoided questioning his technical claims, asking instead if it was odd that Stites was found murdered in her work uniform.

Charles Wayne Fletcher, a former colleague of Fennell's at the Giddings Police Department, testified that Fennell told him before Stites' death of his suspicions that she was, as Fennell put it, "fucking a n----r." The phrase, spoken aloud, caused gasps in the courtroom; on cross­-examination, Fletcher said he never revealed what Fennell told him out of fear that he and his family would be targeted by police.

Later on Monday, Ruby Volek testified that as she signed Stites up for life insurance, Fennell told his fiancée, "If I ever catch you messing around on me, I will kill you and no one will ever know it was me that killed you." Like Fletcher, Volek testified that she was nervous to tell anyone what she'd heard: "I knew Jimmy a little bit and I was concerned that my life might be compromised."

Six more witnesses took the stand on Tuesday. Two testified that they'd seen Reed and Stites together; another claimed to have seen a fight between Stites and Fennell. Another spoke of Fennell staring into Stites' coffin at her funeral and saying, "You got what you deserved." The most dramatic testimony, though, came from two witnesses who met Fennell in prison.

After Stites’ death, Fennell took a job with the Georgetown Police Department. In 2008, he was charged with raping a woman in his custody and pleaded guilty to a lesser charge of kidnapping and sexual assault, for which he served 10 years in prison.

After Stites' death, Fennell took a job with the Georgetown Police Department. In 2008, he was charged with raping a woman in his custody and pleaded guilty to a lesser charge of kidnapping and sexual assault, for which he served 10 years in prison. Michael Bordelon testified he got to know Fennell at the Sanders Estes Unit, south of Ft. Worth; hearing about Stites, he asked Fennell to tell the story. "I took care of the problem," Bordelon remembered Fennell telling him, as he simulated a strangling motion. "I took care of her and that damn n----r is going to do the time."

Arthur Snow, a former leader of the Aryan Brotherhood, encountered Fennell at the Clarence N. Stevenson Unit in Cuero, and testified that he heard Fennell boast of killing Stites. "He said in my presence, 'You wouldn't believe how easily a belt can break when you strangle a n----r-loving whore,'" Snow testified. Later, during cross-examination, he became annoyed by prosecutors' attempts to discredit his testimony and threatened to take the Fifth, prompting a hasty recess. When the hearing resumed, prosecutors pressured him to say he'd been paid for his testimony; he sneeringly replied that he'd lost his marriage and endured daily threats from the Aryan Brotherhood instead. Asked by MacRae what he'd received for his testimony, he said, "Lot of heartache," but added that testifying for Reed would at least allow him to sleep at night.

Reed's defense team will call at least nine more witnesses over the coming days, followed by prosecution witnesses. Fennell has been subpoenaed but is expected to invoke his Fifth Amendment right against self-incrimination.

A DIY Approach to Helping the Unhoused Pays Off at Camp Esperanza
No funding? No resources? No problem.