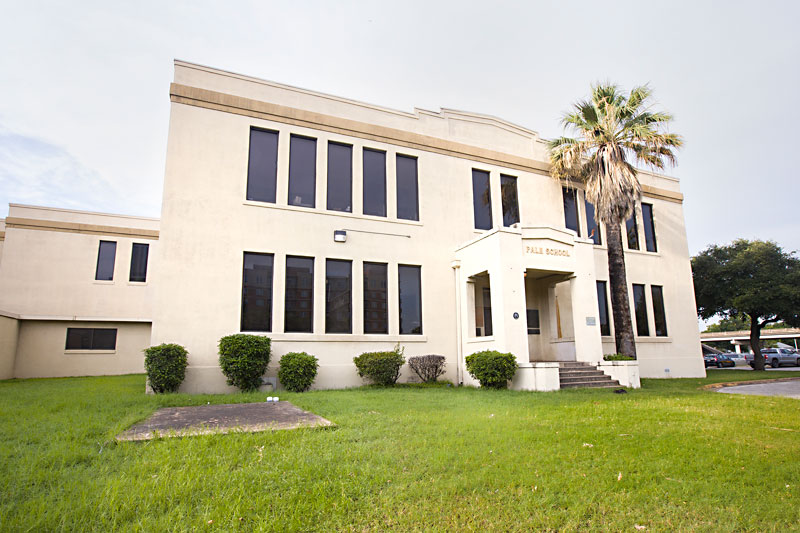 The fate of the historic Palm School at I-35 and Cesar Chavez remains in flux, as the Travis County Commissioners Court last month rejected the city's $10 million offer to purchase the site. The move only attracted notice weeks later, when advocates for preserving the Mexican American community landmark became aware of – and alarmed by – the vote.

The 130-year-old Palm School, built in 1892 and shuttered in 1976, was acquired by Travis County in 1985 and until earlier this year housed its Health and Human Services Department, now relocated to the county's North Campus on Airport Boulevard. County plans since 2015 have included a potential sale of the valuable property. The city made its offer in February 2020, which was not officially rejected until an executive ­session vote on June 15, posted vaguely (as state law allows for real estate matters) as "an offer to purchase a parcel owned by Travis County in Central Austin."

The following week, the court notified City Manager Spencer Cronk of its decision by letter, and then on June 29 voted in open session, without much discussion, to pause negotiations to allow time to update the public on plans for the site. Council Member Kathie Tovo and Commissioner Margaret Gómez agree that a city-county public meeting would be a good venue to share info and gather feedback. In theory, they both agree with advocates that the historic building will and must be preserved for a public use, likely one that would support Mexican American culture – museum, studio space for artists, nonprofit offices, etc.

That original structure and its grounds, protected by city historic zoning, occupy the southern half of the block; city-owned Palm Park lies to the north. In between is a half-block of nonhistoric additions and surface parking that developers have eyed for a while. For the county, the $10 million bid was an improvement over the city's initial offer of nothing, but well below its (pre­-pandemic) appraisal that valued the block at around $50 million. Gómez told us she wants a new valuation of the land to better understand what it's worth.

City officials don't dispute that the property is worth more, but say their offer accounted for the added investment needed to preserve the building and maintain public access. County officials would like to leverage the site's value through a sale or ground lease to help fund mental health services; in 2019, the court approved a restrictive covenant requiring all future owners to repair and maintain the historic area and ensure 80% of it is dedicated for programming and community use available to the public during the building's normal operating hours. The county says its appraisal accounted for preservation costs; the city clearly disagrees.

“The school is much more important than any profit that could be made off of it. ... Our vote keeps it in county hands while we figure out the best option for everyone.” – Travis County Commissioner Margaret Gómez

Rejection of the city's offer, lowball as it was, ignited fears among advocates that the county cares more about profits than preservation. "As a nation, we're all in a position of self-reflection on our history and racial harm throughout it, but here the county is trying to put a price tag on our history," Paul Saldaña, who helped form the Save Palm School Coalition, told us. "But our culture is not for sale."

Gómez says, "The school is much more important than any profit that could be made off of it." That's why "the property needs to remain in public hands to make sure its history is preserved. Our vote keeps it in county hands while we figure out the best option for everyone." She thinks that's probably a city-county collaboration, as does Tovo, who has spearheaded the larger Palm District initiative for the surrounding area. "I remain hopeful that we can have a successful collaboration with the county on the future of that tract," Tovo said. "It's critical to the Palm District, but also in responding to what the community has requested of us, which is that the site remain in public hands and that it be an active purpose and that [it] reflect the cultural and historic nature of the site."

Those hopes now rest on city planner Stevie Greathouse, who's overseeing Palm District planning. It's like herding the people in charge of herding cats; the Palm District will function as an umbrella over other plans and projects that are also in flux, such as expanding the Austin Con­ven­tion Center, building out the Waterloo Green­way along Waller Creek, managing the ongoing transformation of Rainey Street, and updating the Emma S. Barri­en­tos Mexican American Cultural Center. It also has to account for the twin mobility megaprojects of I-35 and Project Connect happening alongside it.

Staff is currently gathering community input and expects to present a vision framework for the Palm District later this summer, followed by a draft plan to be reviewed over the fall and winter for potential adoption in the spring of 2022. "Based on the input provided so far," Greathouse told us, "there seems to be a lot of interest in supporting, emphasizing, and enhancing the cultural and creative aspects of the Palm District." She also said there appears to be "near universal support" for pres