We have seen the future, and it brought pizza 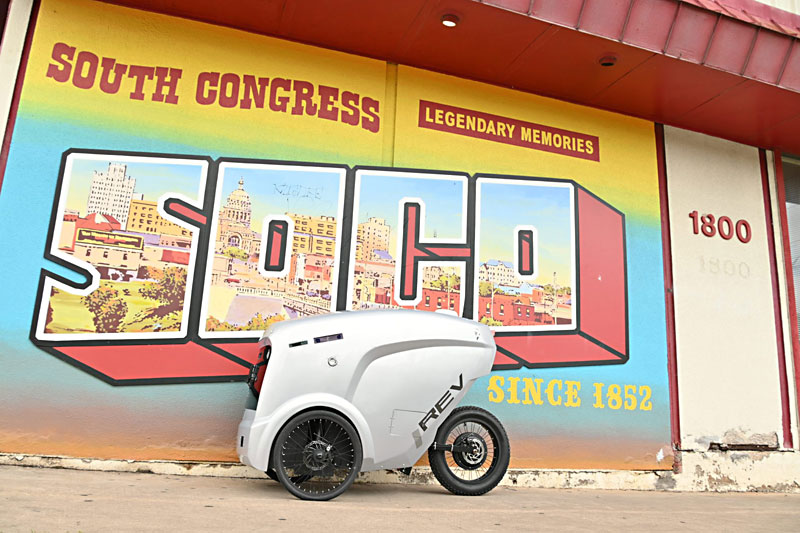 After a year on the streets of its hometown of Ann Arbor, Michigan, the REV-1 has joined the crowds on South Congress (Courtesy of Refraction AI)

Your new neighbor Elon Musk, visionary though he might be, has struggled mightily to back up his big talk on autonomous vehicles. In 2016, he promised a fully driverless Tesla could be "summoned" from New York to Los Angeles within two years. Last week, he tweeted, "Didn't expect it to be so hard, but the difficulty is obvious in retrospect." But he's still trying, which Uber and Lyft and others who'd caught robot-car fever are not. More attention lately has been paid to applications where AVs seem better poised to do useful things right now. Like delivering pizzas.

That's why Refraction AI, a developer of "robotic last-mile logistics" based in Ann Arbor, Mich., has joined the crowds on South Congress with its REV-1 vehicles, carrying Southside Flying Pizza orders to customers in the 78704 ZIP code. The REV-1 has three wheels, can hold a week's worth of groceries or a bunch of pizzas, can fit in the bike lane, travels up to 15 mph, functions in bad weather and at night, is largely contactless (there's a keypad to enter a lock/unlock code), and has a cute WALL-E vibe that likely appeals to both customers and investors.

Even before the pandemic, culinary and food-­systems pros were high on the long-term potential for AV delivery, both of finished foods to customers and of raw foods to kitchens. Now that thousands of restaurants have upped their takeaway game, increased demand plus staffing shortages plus a drive toward zero waste and lower carbon footprints all make the REV-1 not such an absurd novelty.

Refraction AI's fleet of REV-1s is still small, both in Austin and at home in Ann Arbor, where they've been on the roads since early last year, and the tech is still experimental; it may be more accurate at present to call them "drones with AV potential," rather than true robots. As they've rolled out in Austin, each REV-1 has been attended by a "minder," traveling at a distance, who can take control or stop them; they also can be guided by remote pilots who negotiate trickier driving tasks like crosswalks. However, a 100-pound vehicle moving at 15 mph with a 5-foot stopping distance poses a lot less risk than many other moving things on South Congress.

Like Tesla's and Google's sister AV company Waymo, Refraction AI has learned that real-world operation in uncontrolled environments is complicated. "This is going to take a lot more money and a lot more time than we thought it was," Refraction AI CEO Luke Schneider told CNBC last week. But even a semiautonomous drone delivery service with human monitoring could occupy a technological and economic sweet spot between the options available now, rather than being always several years away like that Tesla.

What does the city, with ultimate responsibility for the traffic management and safety of South Congress, think of this? Unlike Austin's experience with scooters and e-bikes, where the city has used its permitting authority to constrain providers but also collaborated with them to refine how micromobility can work best, Refraction AI and anyone else in the delivery game need not ask the city's permission. State statute adopted in 2019 sets basic regulations for "personal delivery devices" and "mobile carrying devices," which are differentiated basically by whether or not the (required) operator is nearby or remote.

These are not, for purposes of Texas law, "vehicles," and could range in size from Amazon's tiny four-wheel drones to the heavily advertised Domino's Pizza robot cars – an AV model called the Nuro R2 – which are the size of golf carts and have gotten their real-world test drives in Houston. Unlike these, the REV-1 can, depending on conditions, operate on a sidewalk, bike lane, or auto lane, all of which the statute permits.

Jacob Culberson, the Austin Trans­port­a­tion Department's manager for mobility services, told the Chronicle last month he thinks the state law "is a very reasonable set" of basic rules; ATD will monitor the data to see if additional rules to protect safety are warranted, as the statute authorizes. In general, though, ATD wants to help such applications as the REV-1 succeed: "I think this is one small step in the right direction," Culberson says – one of the many the city will need to take to reach the ambitious mode-shift goals of its Austin Strategic Mobility Plan.