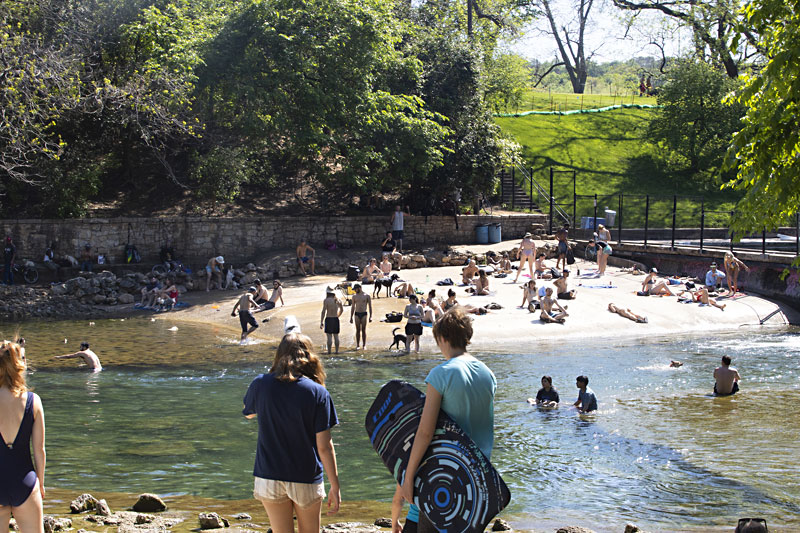 Last Tuesday, June 29, the Austin Parks and Recreation Department hosted its first community meeting to gather input for its Zilker Park Vision Plan, a comprehensive attempt to safeguard the future of Austin's central park as 2 million-plus people visit every year. Like the city itself, "Zilker, too, is experiencing growing pains," said Claire Hempel, project manager for the plan with Design Workshop.

The firm and PARD began their work in November 2020, preparing a needs assessment and identifying six major focus areas for which they've developed guiding principles and high-level goals: guiding future growth, nature and ecology, history and culture, diversity and inclusion, accessibility, and sustainability. The parks department says this is the first attempt to produce a comprehensive plan for the 350-acre park, which traces its roots back 104 years, and its many amenities: not just the Great Lawn that's home to the Austin City Limits Music Festival, but also Barton Springs Pool and the park's other three springs, the Ann and Roy Butler Hike-and-Bike Trail that traverses the park, the Zilker Hillside Theater, the Austin Nature & Science Center, Zilker Botanical Garden, the newly renovated Zilker Cafe and Zilker Eagle train, and more.

These features, unique among Austin's parks, produce the revenue ($2.4 million from events and entry fees in fiscal year 2019) that helps defray the cost of keeping Zilker open. A coalition of nonprofits supporting the various events and venues currently fund most of Zilker's maintenance and improvements; the vision plan aims to identify ways to expand programming and bolster that funding. But that has to happen while also protecting the park's environmental features and endangered species habitat and many historic resources, and meeting the needs of current park users, and mitigating impacts on surrounding neighborhoods – in short, a microcosm of Austin's familiar struggles. 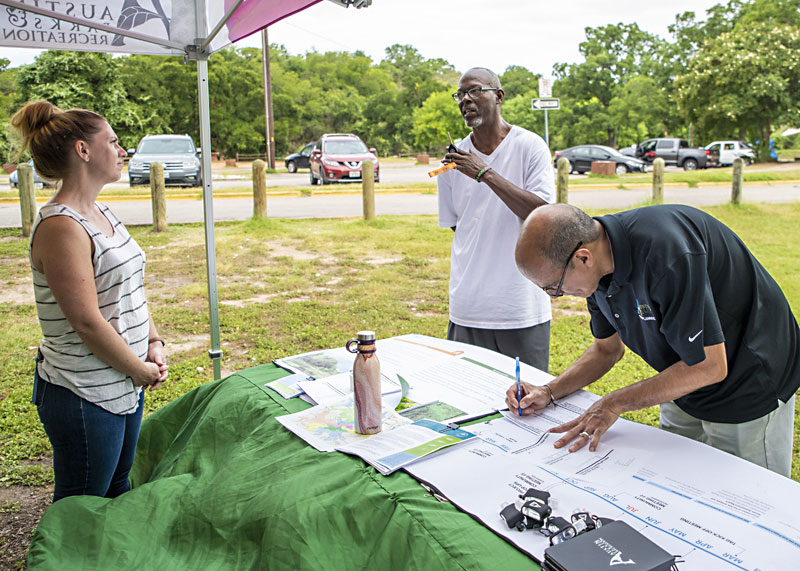 One of the biggest of those is the need to improve mobility options and decrease the need for parking that encroaches on green space. In the "baseline survey" fielded by PARD and Design Workshop as part of the needs assessment, 86% of 4,061 respondents said they get to Zilker in a personal vehicle. When asked what would encourage alternative modes of transportation, respondents cited better trail connections and safer bike lanes as well as better wayfinding within the park; some suggested a circulator shuttle within the park. Respondents' other preferences include more public restrooms, better lighting, and (for some) an increased police presence.

While many of these suggestions are uncontroversial, some proposals for change are bitterly contested. One such issue is the sale of alcohol at the Zilker Cafe near Bar­ton Springs. Though the presenters noted at the outset of the June 29 meeting that they would not address the conditional use permit being sought for alcohol sales, speakers during the Q&A period still took the opportunity to express concerns about safety, as well as what kind of culture it would encourage: "I just don't understand how anyone has to have a beer to enjoy Zilker Park," one citizen commented. Environmental groups including the Save Our Springs Alliance also oppose the permit, and the Parks and Recreation Board voted 4-2 last week to do the same; it will be taken up next by the Planning Commission, whose decision can be appealed to City Council.

Others at the meeting worried that as Zilker grows and programming expands, the park will become commercialized. "When we talk about sustainability, one of the aspects of sustainability is social equity," one speaker noted. "If what we do is create a place that by nature requires you to spend lots of money to come here ... we're making a very elitist place." Another added, "Politically speaking I think we really need to set the policy on how we fund public parks so we do not have to commercialize them in order to maintain them." Former Austin Parks Foundation Director Charlie McCabe, a consultant on the project, assured that the team is "looking at a wide range of public funding mechanisms that different cities use ... Everything from bonds, to sales tax, to park district fees, to everything in between, and we'll report on those as we go through the process."

Speakers' testimonies highlighted the central tension the plan needs to address: how to allow for more activities at Zilker without eroding parts of its familiar character. A dense urban park needs programming and services, said Design Workshop principal Kurt Culbertson, but a natural area focused on environmental preservation needs to be left alone. Zilker has both. "Both the challenge and the opportunity of Zilker is that there are areas ... that are natural in character and that don't have a lot of people in them, and there are other areas of this park that are highly used," said Cul­bert­son. "The challenge of this vision plan is to work with people of the community to try to find the sweet spot."

The final draft vision plan will be finished in January 2022; before then, there will be four more community meetings, as well as 10 in-person pop-ups at pools around town (in each Council district) throughout the month of July, and many small group discussions on specific topics. The 14 of the latter held so far have included sessions on area businesses and park concessionaires, K-12 schools and youth partners, environment and water issues, and historic and cultural tourism.

To view the work done so far, including recordings of all the meetings, visit austintexas.gov/zilkervision.

Despite Disaster, Austin Leveled Up in the 2020 Census
Austin-Travis County was the only city-county pair in Texas to beat its 2010 census response rate