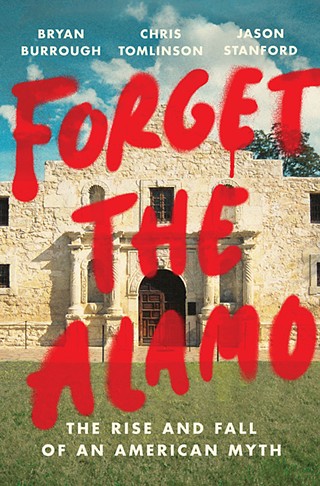 On July 1, the Bob Bullock Texas State History Muse­um, with three hours' notice, pulled out of a planned program with co-authors of Forget the Alamo, a look at the myths and realities of the Texas origin story, after "increased pressure on social media" targeted the museum and its parent agency, the State Preservation Board. The following day, Lt. Gov. Dan Patrick, a member of the SPB, claimed credit for the cancellation, which has not been confirmed by the museum amid the firestorm of controversy that's ensued.

“We will not be censored by @BullockMuseum’s clumsy cancel culture. Ironic that the state’s conservative leaders would pull a stunt like this.” – Chris Tomlinson

The "ReWriting History" virtual program, co-presented with the Writers' League of Texas, was to have featured Chris Tomlinson and Bryan Burrough, two of Forget the Alamo's three co-authors (along with Jason Stanford), talking about "the craft of writing" with WLT Executive Director Becka Oliver. Stanford told the Chronicle that Penguin Press, the book's publisher, informed the authors via email: "The Bullock was receiving increased pressure on social media about hosting the event, as well as to the museum's board of directors (Gov. [Greg] Abbott being one of them) and decided to pull out as a co-host altogether." On Friday, Patrick tweeted: "As a member of the Preservation Board, I told staff to cancel this event as soon as I found out about it. This fact-free rewriting of TX history has no place."

In a June 24 press release promoting the event, Bullock Director Margaret Koch wrote, "Our understanding of history changes over time as the historical record is revealed through new research and insight, but our relationship to history remains complex and often very personal. This program explores the world of writing about our past through the eyes of Texas authors wishing to reveal that complexity." In a statement on Friday, Koch minimized the museum's role as "co-host" and offered no reason for backing out, but said WLT "was prepared to continue the event on their own platform and gave the book's authors the opportunity to do so. The authors declined to continue."

The authors cite logistical challenges for not taking WLT up on this offer, but even if they had, these efforts to deflect didn't change the fact the museum buckled to outside pressure. "We will not be censored by @BullockMuseum's clumsy cancel culture," Tomlinson noted on Twitter. "Ironic that the state's conservative leaders would pull a stunt like this." The SPB's properties are venues for the Texas Book Festival in late October; no word yet on whether Patrick plans to vet that lineup.

Forget the Alamo, in stores for about a month, had already irritated the Texas jingoists who have fomented hysterics about all things Alamo for several election cycles. Earlier this month, Abbott signed House Bill 2497 to create the "Texas 1836 Project," because, he said, "We must never forget why Texas became so exceptional in the first place." The name echoes The New York Times' 1619 Project, centered on slavery, but intends to rebut it; as that effort's creator Nikole Hannah-Jones told The Texas Tribune, "We've been here before. When it comes to slavery, some people have never wanted open debate and honesty."

The "revisionist" history of the Alamo and the Texas Revolution, which has really been the accepted history for decades, also centers slavery, and Mexico's moral opposition to it among the Anglo settlers, and the less-than-exemplary deeds of the boldfaced names of the Texians' last stand. In his review of the book for The Washington Post, UT historian H.W. Brands wrote that the authors "sometimes appear to be beating a horse that, if not dead, was put to pasture awhile back, at least outside the political classes."

But "apparently these facts are so radical in Austin that we're going to run out of pearls to clutch," Stanford said. The book retells both the events of 1836 and the later decades' tussling over their meaning. "It is an odd feeling to have now entered the story of how we are fighting about the Alamo," Stan­ford said. "This book is now an actor in the story that it had told." He told the Chron­icle that Penguin has already ordered a second printing of the book and is preparing for a third, but updates will have to wait. "The paperback edition's going to be a doozy."