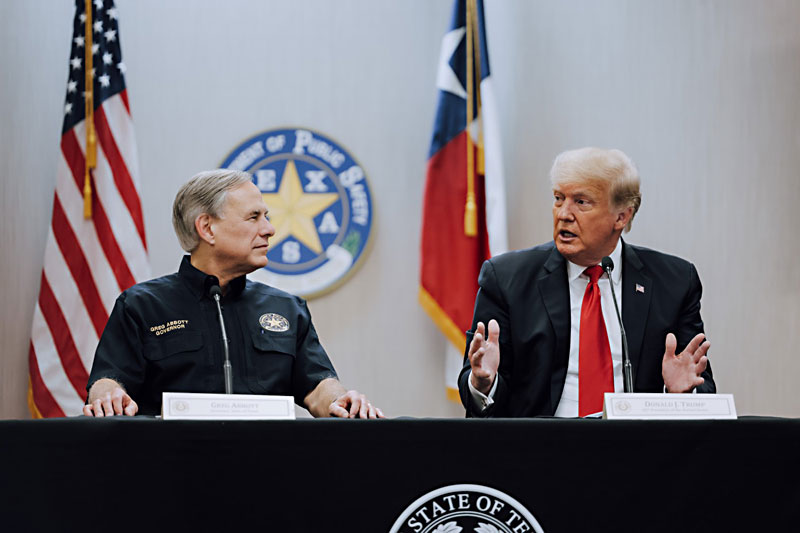 Gov. Greg Abbott and former President Donald Trump during a press conference at the Texas Department of Public Safety facility in Weslasco on June 30 (Image via the Office of the Texas Governor)

In response to Gov. Greg Abbott's declaration of a "public safety disaster" at the Texas-Mexico border, the American Civil Liberties Union of Texas sent letters to the 34 counties covered by Abbott's edict, warning their judges and sheriffs that participating in the governor's immigration enforcement schemes would make them lawbreakers themselves. "If your locality participates in Governor Abbott's unilateral efforts to set federal immigration policy and enforce federal immigration law, you will be in violation of the Constitution and federal law," the letter reads.

Since March, Abbott has incessantly criticized the Biden administration's immigration policies and their impact, based on what his office claims are huge increases in unauthorized border crossings. (Numbers have gone up as the pandemic fades but haven't reached the peaks of prior years.) The pace of his theatrics has picked up since the Legislature left town, including a Rio Grande Valley visit with Donald Trump last week. Abbott has ramped up the state's own border security presence, including shifting some $250 million from the Texas Department of Criminal Justice to begin construction of a border wall (crowdsourcing will fund the rest, he says). His plan calls for immigrants arrested near the border by DPS agents to be detained by TDCJ at its Dolph Briscoe Unit in Dilley, between San Antonio and Laredo.

But Abbott doesn't think state troopers alone can do the job, so he's urged law enforcement in border and border-ish counties to arrest and jail immigrants and subject them to harsher charges than they'd face under federal statute for simply entering the U.S. without authorization. This itself would violate federal law and U.S. Supreme Court precedent dating back to the 19th century, which Abbott, a former Texas Supreme Court justice and the state's attorney general for 12 years, probably knows. Non-U.S. citizens have the legal right to seek asylum and other protections here, the ACLU's letter reminds local officials. Even 2017's highly controversial Senate Bill 4, which mandates cooperating with federal immigration enforcement upon request, doesn't go as far as Abbott is now asking counties to go, the group notes.

“We don’t feel like we have a disaster.” – Starr County Judge Eloy Vera

"Gov. Abbott cannot seek to enforce his own version of immigration policy," said Kate Huddleston, attorney at the ACLU of Texas. "County officials will be in violation of the law if they enforce the governor's plan. Yet again, the governor is targeting immigrants and inciting fear and xenophobia in our state. These moves are a cruel distraction from the real problems facing the state, such as fixing the failing state electrical grid."

In its letter, the ACLU also makes Texas Public Information Act requests for any communication between local law enforcement agencies and the state about immigration since March, when Abbott started "Operation Lone Star" and sent 1,000 DPS troopers to border communities. After the county judges in the Rio Grande Valley – Hidalgo, Camer­on, Willacy, and Starr counties – refused to get on board, Abbott produced a revised list of 28 counties, including some new additions, that he claims have all agreed to partner with the state on border security.

"All four of us were on the same page as far as that is concerned. We don't feel we have a disaster," Starr County Judge Eloy Vera told Border Report. The judges would consider signing on if crime statistics worsened, or data shows that border crossers are threatening the safety of local residents (as Abbott and his allies have insisted is happening every day) – but that's just not the case right now, they said.