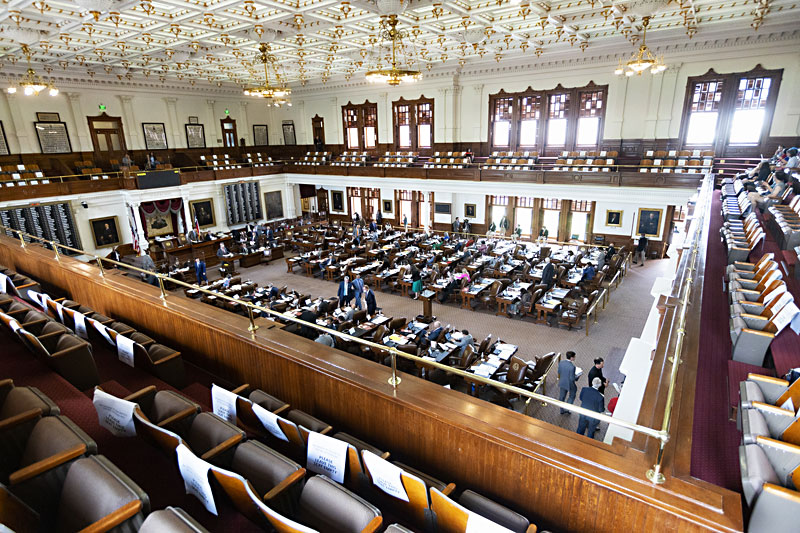 Gov. Greg Abbott vetoed funding for the Texas Legislature after Democrats walked out of the House Chamber (pictured) to block a restrictive voting bill – now Texas Democratic lawmakers are firing back with a lawsuit (Photo by Jana Birchum)

After Gov. Greg Abbott on June 18 issued his stunt veto of funding for the Texas Legis­lature in the upcoming biennial budget, to "punish" the Texas House Demo­cratic Caucus for walking out and breaking quorum in the regular session's final hours on May 30, all 67 of those lawmakers have gone straight to the Texas Supreme Court to punch back. Their legal action – filed June 25 and joined by the Texas AFL-CIO (whose member unions include the Texas State Employees Union) and four Lege employees – asks the SCOTX to order state officials to ignore Abbott's attempt to "defund and render inoperative the entire legislative branch of the Texas government, including non­-partisan legislative agencies, affecting the livelihoods of thousands of Texas state employees and undermining the separation of powers directive in the Constitution of the State of Texas."

As a practical matter, this conflict may be resolved before the case gets to oral arguments, which the plaintiffs have asked to be set in mid-July on an expedited timeline. Abbott has called a special session for July 8, to consider subjects he has yet to specify, though he's talked about "finishing the job" on so-called "election integrity" and bail reform, two priorities he laid out in Febru­ary's State of the State address. Since he vetoed Article X of Senate Bill 1, the 2022-23 biennial budget, Abbott's childishly limited attention span has instead been consumed by his Operation Lone Star border­-wall stunt – Florida Man Donald Trump is in South Texas with him as we go to press – so who the hell knows what other base-tickling primary campaign fodder will end up on the call.

Plaintiffs say the governor has made clear that “should the Legislature fail him again, [Abbott] will either not add legislative funding to the call or will veto the funding bill again and again until he receives all the laws he desires.”

In any event, as the plaintiffs note in their filing for a writ of mandamus, the governor has made clear that "should the Legislature fail him again, [Abbott] will either not add legislative funding to the call or will veto the funding bill again and again until he receives all the laws he desires." This game of chicken could be derailed if the Dems prevail at the all-Republican SCOTX, which they rarely do. But the lawyers put in their best effort to make their case that since Abbott's veto of Article X is already bogus and illegal – or "unconstitutional, ineffective, and void ab ­initio" – Comptroller Glenn Hegar and other functionaries have no choice but to keep writing checks to the 2,100 employees who'd otherwise lose their jobs on September 1. "All the support staffers, whether Democratic, Republican or strictly nonpartisan ... are bystanders in this brawl," Texas AFL-CIO President Rick Levy said. "Gov. Abbott's ambition and obsession with control have caused real harm to real working families."

In a terse response, a spokesperson for Abbott said the governor has unlimited authority under the Texas Con­stitution to veto whatever he pleases, including the livelihoods of thousands of people, except the salaries of the members themselves, "who can continue to legislate." His veto does, in fact, eliminate funding for those lawmakers' meager salaries of $600/month, so this last bit is nonsense. But everyone other than Abbott cares more about the plight of the staffers, not just in members' offices but in such entities as the Legis­lat­ive Budget Board and the Legislative Council (which writes the actual bills and, crucially right now, handles all the logistics of redistricting).

The plaintiffs' response is that Abbott's veto shuts down the operations of the Lege itself, and as such violates the explicit separation of powers in Article II of the Texas Constitution. "Governor Abbott's veto is an attempt to coerce, and thereby direct, how the Legis­lature discharges its functions – far exceeding the usual mechanism of the veto as a check on legislative excess," the filing reads. "If accepted, it would allow the governor to indirectly commandeer the Legislature by making its very existence contingent on its willingness to enact the governor's preferred agenda. And it would set the precedent for the governor to do the same to the judiciary ... He is not free to abolish the Legislature unless he receives legislation he desires."