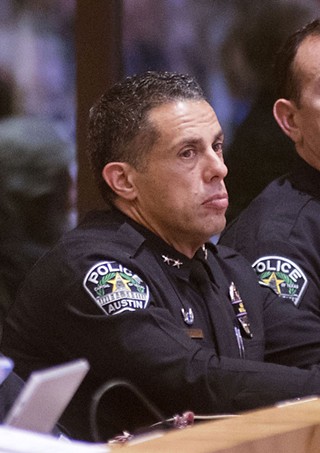 UPDATE June 24 5pm: De'Ondre White was apprehended in Killeen by the U.S. Marshals Lone Star Fugitive Task Force, which includes APD and was assisted in the arrest, without incident, by the Killeen PD SWAT team. He currently is in the Bell County Jail, awaiting extradition to Travis County custody; bail has been set at $1 million on a charge of first-degree murder. - MCM

On Tuesday, Austin police Chief Joseph Chacon and Travis County District Attorney José Garza announced they had identified the actual shooter alleged to have killed Doug Kantor, paralyzed Jessica Ramirez, and wounded 13 others on East Sixth Street early the morning of June 12. That suspect is De'ondre "Dre" White, a 19-year-old Killeen resident who was part of the reported altercation between two groups of teens that ended in gunfire.

The two Killeen teens arrested last week in connection with the shooting have both been released, Chacon and Garza said, as investigators have found no evidence that 17-year-old Jeremiah Tabb and a younger unidentified juvenile participant fired the weapons they had in their possession on Sixth Street. Garza said that dismissing the aggravated assault charge brought against Tabb, and the charge of deadly conduct (a misdemeanor when a gun is brandished but not fired) against the younger teen, was "in the best interest of the investigation."

This is careful language that signals the teens, and others who've been interviewed, are cooperating with the investigation and could testify against White at a future trial. As a further incentive, Garza also made clear he reserved the right to seek charges against anyone involved in the shooting in the future. (Chacon said that APD is confident that everyone involved, including the victims, has been identified and will be or has been interviewed.) The rookie D.A., one of the nation's more prominent reform-minded prosecutors, said he wants to focus his office's energies on holding the actual shooter accountable: "When he is apprehended, he will be charged with murder."

Both Chacon and Garza, who appeared side-by-side as partners despite the D.A.'s recent decision to prosecute several Austin police officers, sought to stay within the four corners of the incident itself, but questions from reporters illustrated how challenging that might be as the case progresses. The Statesman's Katie Hall asked whether APD had concerns about having arrested the wrong people; Chacon said, "These are not people who were innocent bystanders or were somehow indirectly identified. ... In the end, these individuals had weapons and might have otherwise done greater harm to our community."

Another reporter, referencing prior APD briefings that the altercation was prompted by Tabb's wounding another teen in Killeen earlier, brought the counterpoint: "Is it in the best interest of the community to let these two walk out, right now? And what happens to their guns?" Tough-on-crime talking points in this case are also being delivered by Doug Kantor's younger brother, who decried the teens' release and told KXAN he has "no faith" in Garza's inquiry. Nick Kantor has been the family spokesperson since the shooting, which he originally blamed on "gang members" and "defunding the police"; his social media activity includes plenty of memes, likes, and shares that confirm his politics are diametrically opposed to those of José Garza.