Amid clouds and darkness, Texans get ready to fight for choice 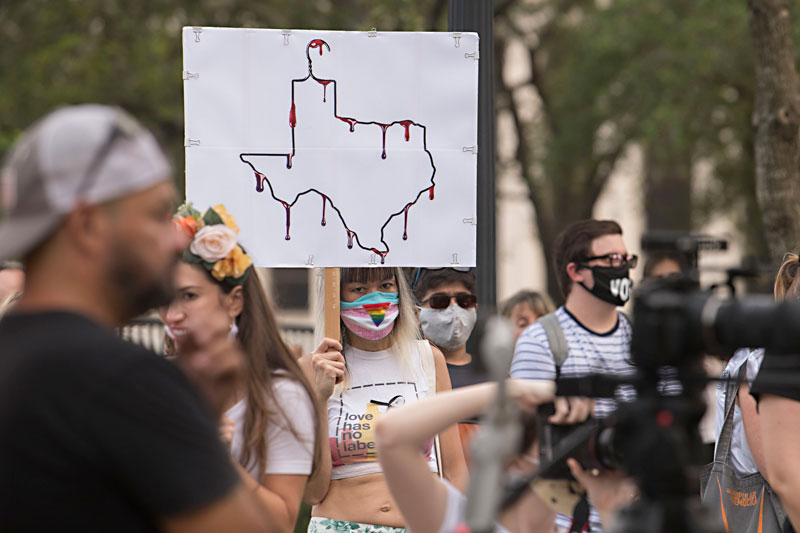 Texas Freedom Network organized a demonstration outside the Governor's Mansion on Thursday, May 27, in recognition of Texans' rights attacked during the 87th Texas Lege (Photo by John Anderson)

"Let's be clear about this – abortion is still legal in Texas," Rep. Donna Howard, D-Austin, reminded the hundreds of energized citizens rallying outside the Capitol on the balmy Saturday before sine die to protest the 87th Texas Legislature's aggressive assault on reproductive rights. The reminder is certainly – and sadly – a necessary one: Anti-choice lawmakers and activists, emboldened by a new majority on the Supreme Court and the failure of Democrats to gain control of the Texas House, saw their wish lists fulfilled this session.

The most visible new law, Senate Bill 8 by Sen. Bryan Hughes, R-Mineola, which Gov. Greg Abbott signed into law last week, is the most restrictive ban in the nation, effectively banning abortion at six weeks (in the medically illiterate fantasies of zealots, the point at which the pea-sized embryo has a "heartbeat"). That's before most women know they are pregnant, so it amounts to a total prohibition while still lying within the theoretical boundaries of Roe v. Wade and subsequent Supreme Court rulings. The law makes no exceptions for rape or incest.

To make things even more authoritarian, SB 8 also grants any private citizen, even those residing outside Texas, legal standing to sue people (other than a pregnant woman herself) who they believe have violated the law. Plaintiffs don't need any kind of direct interest in a specific patient's care or well-being. Not only providers, but anyone who "aids or abets" an abortion or "intends" to do so, can be slapped with a civil suit and hefty fines of at least $10,000. 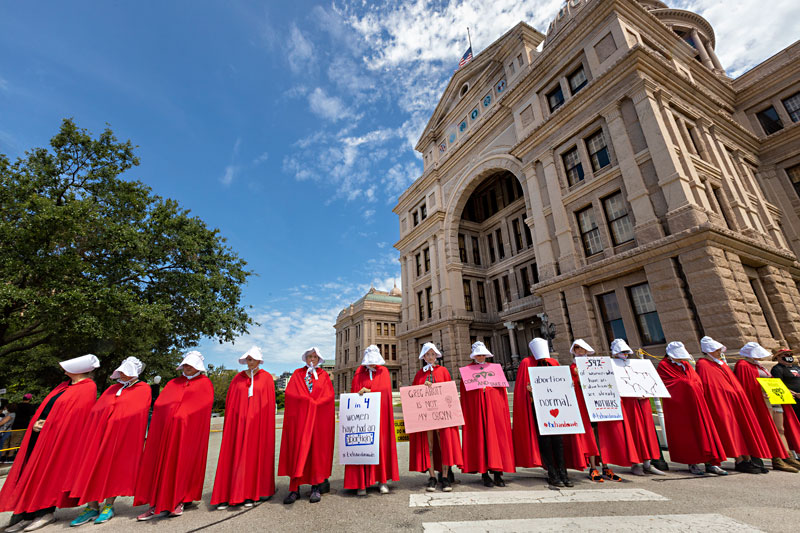 Protestors at the Don't Mess With Texans' Abortions rally on Saturday, May 29 (Photo by Jana Birchum)

That means clinic staff, family members that loan money for the procedure, or even a friend that offers a ride to the clinic could be sued by out-of-state anti-choice activists aiming to put providers out of business, without the state of Texas itself having to enforce the measure. This particularly insidious provision, the first of its kind in the U.S., was decried before SB 8's passage by more than 200 doctors and nearly 400 licensed attorneys, including Austin Mayor Steve Adler and Travis County Attorney Delia Garza. "This means literally anyone can use our judicial system to harass and intimidate our hardworking doctors, neighbors, and friends for the simple reason that they may have helped someone access an abortion," Howard told the crowd.

The Legislature did not stop there. A "trigger bill" (HB 1280 by Rep. Giovanni Capriglione, R-Southlake) would extend SB 8's ban to all abortions if SCOTUS overturns Roe, a creeping possibility now that the court has taken a pivotal case out of Mississippi challenging Roe's threshold of fetal viability. Rather than helping vulnerable Texans navigate the COVID-19 health crisis, both Abbott and Lt. Gov. Dan Patrick anointed these bills as "priority" legislation at the beginning of the session.

Meanwhile, as attempts to broaden health care access for Texas women foundered during budget deliberations, Republican lawmakers granted the problematic Alternatives to Abortion program, which largely includes faith-based, nonmedical crisis pregnancy centers (CPCs), a stunning $100 million to spend over the next two years – a massive infusion of cash for the program.

The Lege did manage to pass a bill to combat the state's maternal mortality crisis, but that measure fell short of its original goal of giving new moms a full year of Medicaid coverage, strongly recommended by health experts and the state-appointed Maternal Mortality and Morbidity Review Committee. Black women, advocates note, bear the brunt of Texas' failed and misguided women's health policies. "Abortion bans disproportionately harm Black women, who are three times more likely to die during childbirth than white women," said Michelle Anderson, state organizer with the Afiya Center, during the rally.

Amid all the clouds and darkness cast on reproductive rights this session, one thing is for sure: Texas pro-choice advocates, who've endured years of abuse from the state, don't shy away from a fight. Abortion providers, supporters, and attorneys have vowed to file suit in court to block SB 8 before it takes effect on Sept. 1. "Hear me when I say, abortion access is a human right and a constitutionally protected right," said Amanda Williams, executive director of abortion support group the Lilith Fund, to cheers from the crowd of pro-choice advocates. "This Legislature cannot shut us down. And they will not stop us from supporting people in our communities. No matter what, we will do everything we can to make sure Texans receive the abortion care that they need.

A version of this article appeared in print on June 4, 2021 with the headline: Amid Clouds and Darkness, Texans Get Ready to Fight for Choice