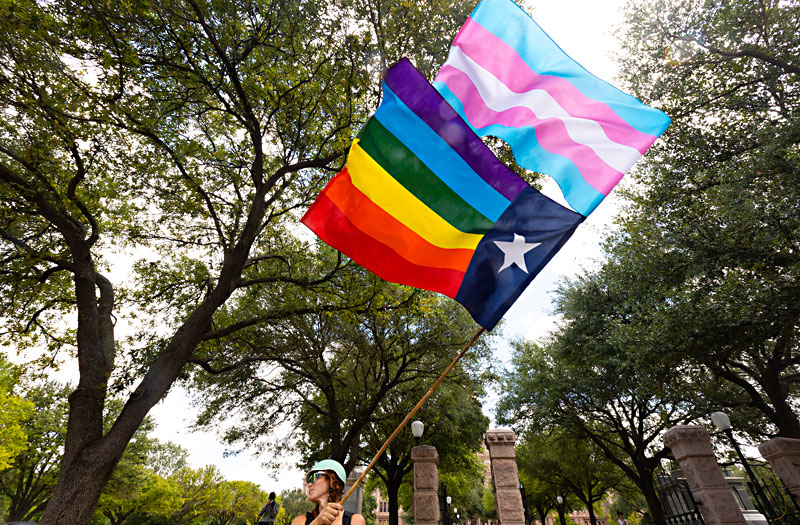 LGBTQIA rights supporters and advocates rallied outside the Texas State Capitol in opposition to bills targeting trans and nonbinary Texans at the 87th Texas Legislature on Thursday, May 20 (Photo by Jana Birchum)

Despite Texas' unwelcome distinction as the state with the most anti-LGBTQIA bills filed this year, the rights of queer and trans Texans emerged relatively unscathed by the 87th Texas Legislature.

In a statehouse whose GOP leadership has situated itself in previous sessions at the vanguard of the evangelical right's moral panic over trans and nonbinary people, a win for LGBTQIA rights was among the few outright highlights for progressives under the pink dome. It's all the more remarkable considering the huge national wave of anti-LGBTQIA legislation, the right's most aggressive pushback in at least a decade.

However, in an eleventh-hour move characterized as "spiteful" and a "petty political game" by the Texas Freedom Network, Dutton – aggrieved by the failure of his bill to put troubled Houston ISD within the reach of charter schools eager to take it over – switched his own vote to send SB 29 to the House floor. There, pro-LGBTQIA House Democrats, many of whom were founding members of the Texas House LGBTQ Caucus, strategically ran down the clock by talking to death a number of other bills ahead of SB 29 on the calendar – a practice known as "chubbing" – and kept SB 29 from getting a vote.

SB 29 was the only anti-LGBTQIA bill this session to hit both chamber floors for a full vote. SB 1646 (also by Perry) and SB 1311 (by Sen. Bob Hall, R-Edgewood), two prominent bills targeting gender affirming care for youth by restricting parents' and physicians' rights, respectively, passed the Senate but failed to make it out of the House Committee on Public Health.