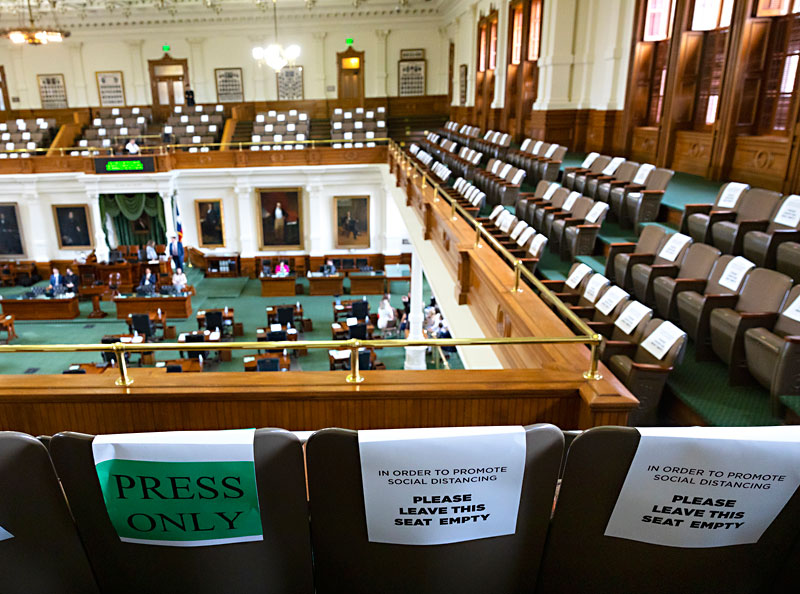 It was the best of times (for some), the worst of times (for many), and clearly the oddest of times for a lot of reporters who have spent multiple sessions under the pink dome. The COVID-19 pandemic provided the best excuse to bar reporters from the floor of the Texas House and Senate during this one-of-its-kind session. It took a midsession letter from the editors of major state publications to get some access to the House floor, and even then, it was limited: Reporters were required to keep their seats during most floor debate.

The need for access to elected officials and their staffers to report any session cannot be overstated. A senator walking past tells you his big transportation bill is up tomorrow. A staffer in the back hall explains a school finance glitch to you. You're on the floor and you see a dust-up between two House members that will lead to high-caliber vengeance the rest of session.

Moritz poses the questions most press corps members will never be able to answer: Was there some tension between two senators that reporters could not see? Was there a reason why some bills didn't get put on the intent calendar? And, if those bills were on the intent calendar, why some of those bills were never debated? "We were just not in a really good position to find out, and definitely not in real time," said Moritz, who dedicated a column to the topic two weeks ago.

Relaxing the rules on the House floor did provide some access to lawmakers, especially when the House failed to convene on time, Moritz said. It was challenging, but not impossible. The Senate, on the other hand, never relaxed its rules, and reporters found themselves filing reports from the third-floor gallery.

"The Senate side was as opaque as I've ever seen, in my memory. Zero for access," Moritz said. "That kind of builds on the last couple of sessions, where even if you do have access, they tightly restrict the ability to move around the chamber."

R.G. Ratcliffe, the longtime Houston Chronicle Capitol reporter who recently retired from a stint at Texas Monthly, goes even further. He says reporter access to the Senate has tightened significantly since Lt. Gov. Dan Patrick was elected in 2014. Ratcliffe, who spent 38 years in the Capitol press corps, calls it "an authoritarian method of controlling the message."

"Now that the media has been moved to the gallery, I don't see reporters getting back on the floor," Ratcliffe said. "The founders saw the value in a free press challenging the conventional wisdom of the governing class. Apparently, the Texas Senate does not."

A version of this article appeared in print on June 4, 2021 with the headline: Press Corps Cooped Up