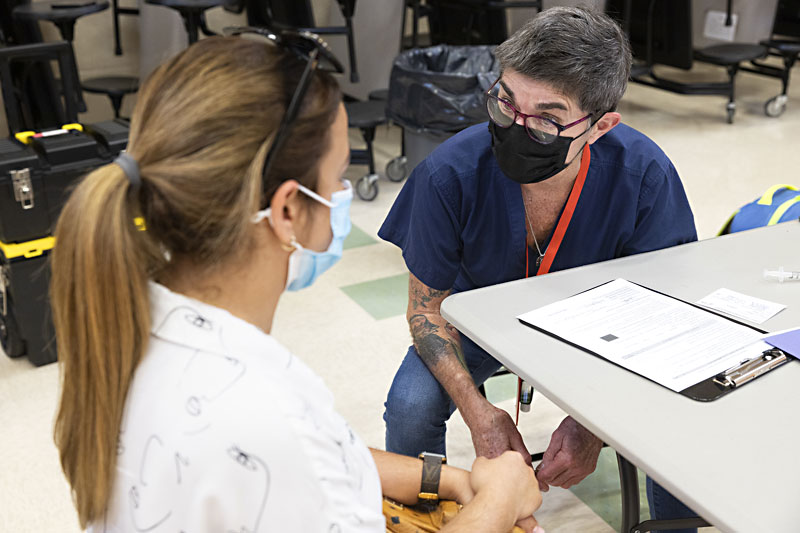 Standing inside the half-built house at her construction site job, Daysi Moreno knew she had to get the COVID-19 vaccine. She always wore a face mask at work, encouraged by her kids, who peppered her with questions when she got home: "How many times did you change your mask? Who was working with you? Did they sneeze at all?" And yet, although many of Moreno's co-workers have contracted COVID-19, dozens of people at the construction site didn't wear masks.

Moreno worried for her health.

Still, Moreno was also concerned about possible vaccine side effects, so she asked Claudia Villarreal, a counselor at Austin ISD's Guerrero Thompson Elementary School, for advice. Moreno's son, José, an artistic and shy sixth-grader at Kealing Middle School, is a Guerrero Thompson alum; her daughter Sophia, an outspoken Girl Scout, is a fourth-grader there.

As a leader of Guerrero Thompson's get-out-the-vax effort since January, Villarreal understood Moreno's questions and concerns. She reassured Moreno about the side effects, sharing her own vaccine experience, and helped her schedule a time after work to get the shot.

"I had some doubts, because this is new for everybody," Moreno, who was vaccinated in April, said. "But I trust them."

Moreno is one of 255 people who have received vaccines with the help of Guerrero Thompson and its clinic providers, which include Ascension Seton, Travis County Health and Human Services, and Austin Public Health. As schools across Austin have promoted vaccination, Guerrero Thompson's efforts stand out. Nearly 30% of residents in the school's ZIP code, 78753 in North Central Austin, are fully vaccinated as of June 1, according to Texas Department of Health Services data, and almost all Guerrero Thompson's students are Latinx, a community hit especially hard by the virus. Still, the school has drawn students, parents, in-laws, co-workers, and neighbors to the school for their shot.

Guerrero Thompson's success is built on a community years in the making, said school Principal Briana Garcia. Staff have cultivated a rapport with families, letting them address worries about everything from the vaccine's side effects to misinformation circulating on social media. Some good-natured humor can help, too – Villarreal reassured some fathers worried about the shot that if they're afraid of needles, "you will have your child to hold your hand." Staff are also ready to translate and organize logistics for those who do register for a vaccine.

When the school's community struggled with food insecurity earlier in the pandemic, Guerrero Thompson teachers donated money to buy groceries for families, including Moreno's. When José had a tonsillectomy, his teachers checked in frequently to update him on classroom life. During Winter Storm Uri, "every single teacher" called to ensure Moreno's family was safe. And it's that community care that led Moreno to trust again on the vaccine, prodding co-workers to get their shot at the school and sending José to get his as soon as she could.

"If I ever called them and told them we're out of food or something's wrong with one of the kids, I know that they will be here as soon as they could," Moreno said. "It's a big relief. I don't even know how to explain it. It's like having my mom or my sister right next to me and having them helping me out."

A version of this article appeared in print on June 4, 2021 with the headline: “I Trust Them”: Austin Schools Get COVID-19 Vaccines Into Arms