As Austin's I-35 Mess Gains National Attention, the City Refocuses on the Palm District 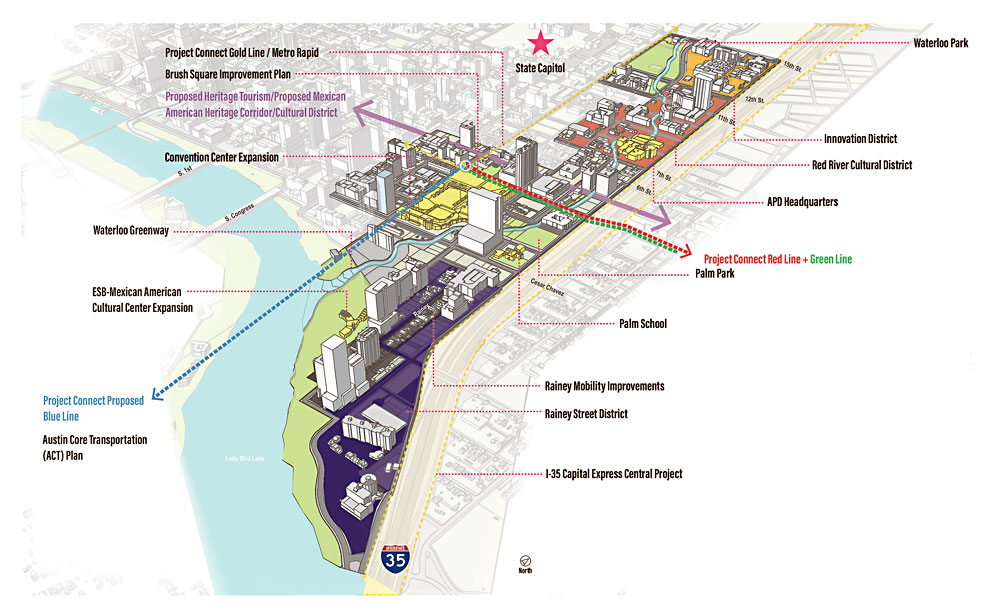 The Palm District, as defined in the new planning initiative, stretches along I-35, Waller Creek, Red River, and Rainey Street in what is no longer the forgotten edge of Downtown. There's a lot of stuff in this area, and a lot of plans already; the Palm District team calls out 16 such studies, most within the last decade, looking the Convention Center expansion, the Innovation District anchored by the former Brackenridge Hospital campus, the ever-changing landscape on Rainey, the Waterloo Greenway along the creek, and both TxDOT's I-35 rebuild and the Project Connect transit plan. In the middle of it all, giving its name to this new creation, is the old Palm School, the elementary that once educated Mexican American East Austin. (Courtesy of City of Austin)

For the second time in three years, Austin's unbeloved Interstate 35 has been "recognized" by the influential Congress for the New Urbanism in its 2021 "Freeways Without Futures" report. The national planning group, which has an active chapter in Central Texas, took heed of the long-running efforts by local advocates for sustainable mobility, smarter land use, and environmental justice to forge a different vision for what the highway could be, especially in the central city, where it remains an ugly, unsafe, and unhealthy barrier between East and West Austin. Meanwhile, the blocks alongside I-35 in the city's core, which have been refashioned by city leaders as the Palm District, are finally getting the closer look Council asked for way back in 2019, before COVID-19 and everything else, when the biggest question vexing City Hall was what to do about the Austin Convention Center.

Back then, CNU also spotlighted I-35 in "Freeways Without Futures," an ongoing project spawned by the group's advocacy for highway removal in U.S. cities where past public works destroyed the urban fabric and, usually, the communities of color that midcentury modern mayors and boosters felt were expendable. (A later, better mayor of one such city, Milwaukee's John Norquist, successfully executed a "highways to boulevards" project there and then led CNU as its CEO for many years.) The report points to efforts in 18 cities as proof of the concept nationally, including such high-profile examples as the removal of San Francisco's Embarcadero and Central freeways following the 1989 earthquake. These communities "either have transformed or are committed to transforming freeways into community assets that provide social, economic, and environmental benefits," the report reads, adding that the Biden administration – which placed the federal highway machine in the hands of another reformist Midwestern former mayor, Pete Buttigieg – "has made reconnecting the communities divided by highways one of its priorities."

Austin could use the help. The CNU report gives due credit to local advocates – Reconnect Austin, Rethink35, the Downtown Austin Alliance, and others – for their intrepid and frustrating efforts to make the Texas Department of Transportation change course on what it calls the Capital Express Central project, which will spend as much as $8 billion to likely widen I-35's footprint and create "managed" lanes to minimally influence traffic flow, at untold cost to the surrounding communities who have already been living with I-35's burdens upon safety, health, and equity for decades. "As TxDOT considers what to do with I-35," the report reads, "it needs to stop thinking about the highway in a vacuum and instead should focus on how its investments can achieve multiple goals simultaneously." Pointing to the landslide 2020 victory for the Project Connect transit plan at the polls, it continues: "Austin's citizens have made clear their desires for the future of transportation and it is not more highway building."

I-35 at Eighth Street facing southwest, as it would look in TxDOT's vision of the agency's Capital Express Central project, with all travel lanes lowered below grade level (Courtesy of TxDOT)

Such consensus has sadly eluded the numerous stakeholders with overlapping interests whose goals and projects are now being rounded up into the Palm District, which is now, after a year's delay, in the "visioning" phase of its planning process. The Palm District origin story dates back to the bygone era of ... two years ago, when Mayor Steve Adler was trying to align those constituencies behind a Convention Center expansion and increase to Austin's hotel occupancy tax rate, along with a new self-assessment by the hoteliers, all of which would go to support live music in the Red River Cultural District, help people exit homelessness, expedite creation of the Waterloo Greenway along Waller Creek, and much else. At the same time, the city and Travis County, then led by Sarah Eckhardt, were tussling over HOT revenue that could go to fix up the Expo Center in the Eastern Crescent and the fate of the county-owned Palm School building, once the main primary school for Austin's Mexican American community, whose advocates (organized by former City Hall aide and Austin ISD Trustee Paul Saldaña) want it preserved as part of a larger Hispanic cultural corridor or district.

All of that – plus the ever-larger development boom in the Rainey Street District, the redevelopment of the former Brackenridge Hospital campus (owned by Central Health) as the anchor of an Innovation District including UT Dell Medical School, and both the I-35 rebuild and Project Connect – has now been enfolded in the Palm District planning area. This is intended as an example of the kind of "small area plan" that the density-skeptic wing of Council (including Kathie Tovo, who wrote the behemoth resolution that gave birth to the Palm District) want to see as a solution for Central Austin's thorny land use questions and overlapping stakeholder interests. The work plan presented by city staff ticks off 16 different prior plans, most within the last decade, that sought to make things happen on Downtown's eastern edge. Or, as one of those plans – the UT Center for Sustainable Development report on Convention Center expansion in 2019 – put it, what used to be its edge. "Austin's downtown also has a shifting center ... The convention center [and the Palm District] now occupies a connection point between important urban corridors. Redevelopment strategies ... should recognize the problems and opportunities surrounding [this] new nexus and strive to resolve the conflicts inherent with competing interests and initiatives."

No pressure! To raise the stakes here just a little bit higher, the city has also developed an "equity framework" for the initiative that minces few words: "Evolution of the Palm District over the last century has provided a microcosm of the larger trends impacting Austin's communities of color, including segregation, disinvestment, facility closings, neighborhood disruption, redevelopment, gentrification and displacement."

In words that largely echo the community's complaints about I-35, the city commits to "avoid repeating the mistakes of the past" by using an "equity lens" to create the Palm District plan. "We will acknowledge and center the needs of frontline communities, such as those of East Austin, who have been historically burdened with harmful and toxic land use projects implemented through City policy and action." This is in addition to enabling sustainability and resilience and helping all the intersecting and overlaying projects better achieve their goals of improved mobility and housing, world-class parks and public spaces, better community health, economic opportunity and job creation, and cultural preservation.

The Palm District Planning Initiative's online presence (at speakupaustin.org) is a place where you can learn more, provide input, and see what others have said. TxDOT's Capital Express Central project isn't that directly transparent yet (it will need to be eventually, in theory, to comply with federal law), but the agency says it will come back with its refined I-35 alternatives and a purpose and need statement in the next few weeks, and again invite public comment.

A version of this article appeared in print on June 4, 2021 with the headline: As Austin’s I-35 Mess Gains National Attention, the City Refocuses on the Palm District