Current orders do not even define what constitutes "resistance" "Resistance" is a central concept in policing; officers commonly cite it as the reason for using force against people they perceive as uncooperative. But according to a recent report by the city's Office of Police Over­sight, the Austin Police Department has no workable definition of "resistance" in its General Orders, the rules governing officers' use of force and every other facet of their work.

The OPO's report, titled "Redefining Resist­ance and Considering Alternatives," was commissioned by City Council in June 2020, after Austin police injured dozens of Black Lives Matter demonstrators, some seriously, with so-called "less lethal" munitions. The report explains that APD employs a common use-of-force policy known as the Dynamic Resist­ance Response Model, or DRRM. The model defines four levels of resistance that police may encounter: no resistance; passive resistance (the subject does not comply with the officer or tries to escape); aggressive resistance (the subject struggles with the officer); and deadly resistance (the subject tries to injure or kill the officer). In addition, APD has crafted a category, unique to the department, of "preparatory resistance," where an officer determines that a subject is getting ready to resist.

APD’s “reasonable” approach allows individual officers great flexibility in the field, but places a heavy responsibility on them to correctly interpret situations and show restraint with deadly force.

For the DRRM to work as intended, these levels of resistance should be articulated and assigned specific levels of permitted force, yet none of that is done in APD's General Orders. Kathy Mitchell of Just Liberty says this is dangerous: "By failing to define resistance, and then by creating this concept of 'preparatory resistance,' you've simply eliminated any line, whatsoever, between all of us and the use of force. There's simply no limitation on use of force if we fail to define resistance."

To show how resistance is evaluated elsewhere, OPO's report compares APD's understanding of the concept to that of police departments in 15 U.S. cities of similar size. Nine of these, like APD, teach their officers a "just be reasonable" approach to guide their use of force, along with the DRRM. The other six, including Dallas and San Antonio, use the more detailed "continuum" approach, which defines specific, increasing levels of resistance and pairs these with permissible responses.

The "reasonable" approach used by APD allows individual officers great flexibility in the field, but places a heavy responsibility on them to correctly interpret situations and show restraint with deadly force. The shortcomings of this approach, and of APD's hazy understanding of resistance, were on display in the Jan. 5 police killing of Alex Gonzales. Throughout the encounter, as depicted in the critical incident video released by APD, Gon­zales offered what the continuum approach calls "passive resistance," which does not allow the use of deadly force in response. Nonetheless, an APD officer shot and killed Gonzales within 80 seconds of arriving on the scene.

In its report, OPO recommends that APD adopt the continuum approach to help officers avoid this kind of outcome. It also recommends devoting more time to teaching de-escalation strategies at the police academy; requiring supervising officers to respond to scenes where officers or dispatchers believe significant force may be used; requiring officers to have more nonenforcement contact with the community; and increasing scenario-based training, which teaches officers to properly evaluate high-stress "shoot/don't shoot" situations. 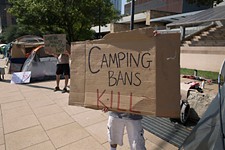