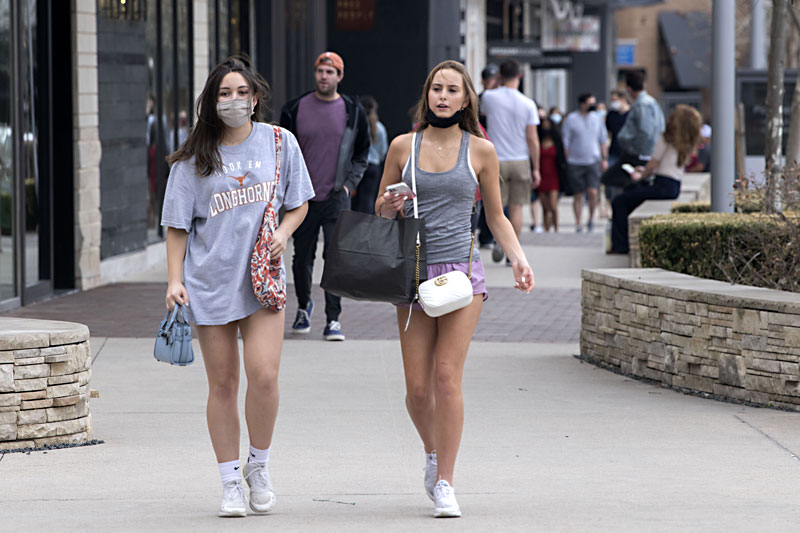 Following several relatively uneventful months in COVID-19 sparring between local and state officials, Austin and state leadership are once again making headlines with their respective – and more often than not dueling – views on who ultimately calls the shots on enforcing public health practices.

Earlier this week Austin Public Health announced that the city and county have dropped down to Stage 2 of the local COVID-19 Risk-Based Guidelines. Under Stage 2, health officials recommend that fully vaccinated residents can dine, shop, and participate in indoor and outdoor private gatherings without wearing face masks if allowed by businesses, while partially vaccinated or unvaccinated individuals are urged to keep wearing face masks for all those same activities. Every­one, regardless of vaccination status, is encouraged to wear face masks while traveling.

This is the first time APH has declared Stage 2 since they first introduced the guidelines at the beginning of Austin's first deadly COVID surge last May. At the time, Austin was considered to be in the Stage 3 risk category, with Stage 1 being the lowest level of risk to Stage 5 representing the most serious threat. Now, a year later, APH has revised the guidelines to factor in people's vaccination status, following updates from the Centers for Disease Control and Prevention, including its most recent decision to lift mask guidance for fully vaccinated individuals.

Austin's new guidelines are not changes to local rules and regulations for businesses; everyone should continue following additional health and safety requirements of local businesses, venues, and schools regardless of vaccination status or risk stage, stressed APH. Hours before APH downgraded Austin's risk-level to Stage 2, outgoing Interim Health Authority Dr. Mark Escott renewed and updated Austin's local Health Authority Rules through June 15, which had been set to expire May 18. Although separate from Austin's risk recommendations, the Health Authority Rules also were revised to include changes to masking requirements. Masking is required in hospitals, health care facilities, and long-term care facilities, but it's up to a business owner's discretion whether to require masks for fully vaccinated individuals if there are less than 500 people inside or 2,500 outdoor. Meanwhile, outdoor sites with more than 2,500 may be exempt from mask requirements if the health authority approves the site's COVID precautions.

Previously, the rules required masking in businesses open to the public. In March Texas Attorney General Ken Paxton sued local officials over Austin's mask requirements in the wake of Gov. Greg Abbott's rollback on a statewide mask mandate among other safety protocols. The rules were allowed to stay in place after District Judge Lora Livingston denied Paxton's petition for a temporary injunction.

However, only hours after Escott renewed Austin's Health Authority Rules on Tuesday, Abbott issued a new executive order prohibiting governmental entities, including counties, cities, school districts, public health authorities, and government officials, from requiring face masks. Beginning May 21, local governments or officials that defy Abbott's order could face a fine of up to $1,000. Executive order GA-36 permits public schools to leave mask guidelines in place until June 4, after which no student, teacher, parent, staff member, or visitor can be required to wear a mask while on campus.

"Texans, not government, should decide their best health practices, which is why masks will not be mandated by public school districts or government entities," said Abbott. "We can continue to mitigate COVID-19 while defending Texans' liberty to choose whether or not they mask up." Exempt from the order are state-supported living centers, government-owned or -operated hospitals, Texas Department of Crim­inal Justice facilities, Texas Juvenile Justice Department facilities, and county and municipal jails.

The governor's new order represents the first time that public schools in Texas won't be allowed to require face masks under state order, as Abbott's order in March left schools' mask policies untouched. In response to the governor's new mask order, Austin ISD Superintendent Dr. Stephanie Elizalde said, "We are reviewing our options to ensure that our staff and students are safe throughout this pandemic." AISD continues to ask everyone to wear masks on campus and at district sites until June 4, encouraging students and families to get vaccinated, and to wear face masks until they are fully vaccinated. In light of the ban on school mask mandates, Elizalde said, "it has become all the more critical to increase vaccinations for our students 12 and up and their families now and throughout the summer."

Travis County Judge Andy Brown called GA-36 "irresponsible at best and dangerous at worst" on Tuesday evening. "By prohibiting local communities from having basic mask requirements in place, [Abbott] has put at risk our public servants and essential workers, folks who have put the health and safety of themselves and their families on the line throughout the pandemic." Lam­bast­ing Abbott's move as putting "party politics over public health," Brown said the governor's rollback on masks in schools puts young, vulnerable children at risk, pointing to Dr. Anthony Fauci's estimated timeline of early 2022 for when kids 11 years old and younger will be eligible for a COVID-19 vaccine.

Brown, who was among several named defendants in Paxton's mask lawsuit including Mayor Steve Adler, said he is working with county attorneys and other local leaders to explore "what tools we may have available to continue to keep our community safe." As of press time, it was unclear if Austin's Health Authority Rules were a violation of the governor's executive order.