Austin at Large: It Hurts When We Do That

As the old doctor joke goes, then stop doing that. Good advice for City Hall.

I had hoped to not need to write again about the hash we have made of our community's attempts to end homelessness, but I did not expect City Hall to whiff so badly in its first at-bat since laying out its strategy to comply with the voters' verdict on Proposition B. Our man Sanders gets to the heart of the policy dilemma and the facts on the ground – the unhoused poor who are living without shelter in Austin's public realm have nowhere else to go. Not much we can do in the next few weeks will truly change this fact.

But we can certainly do a better job of trying to solve for homelessness in public than we saw at Tuesday's Council briefing. I don't give advice for money as a consultant anymore, but you don't need $200/hour help to realize that whatever Austin needs to do now to build community consensus around a viable good-faith effort to comply with Prop B, it was not that. It hurts when we do that.

Let's sit under the learning tree! As I left off this column two weeks ago, Council, with Kathie Tovo at the vanguard, had ordered staff to quickly turn around a plan for creating sanctioned campsites where it would be OK for the homeless to be homeless for a while. Staff told Council two years ago that this was a bad idea – such places are never "temporary," they only provide relief if they're truly superior than sleeping rough in the woods, and they cost more to operate than it does to case-manage their intended residents into stable housing. But that takes time, which Prop B snatched away from the city, politically speaking, so here we are again.

Guess what? When asked to pursue what they think is a bad idea, city staff did it badly. Before y'all and the governor drag them for that, consider honestly whether you have ever seen such an outcome in your workplace. If the city's point people on homelessness thought this was a good idea, they'd take the opportunity of a public Council briefing attended by unfriendly media to sell its intended outcomes, lay out a process for guiding decisions, and invite stakeholder feedback. While the time frame is compressed, and the perceived political stakes higher than the city is facing right now as it implements the Project Connect anti-displacement fund, the components are the same, and could have been at least gestured to, or given placeholders, in the report to Council.

Instead, we got the worst of all possible work products – a sketchy, sloppy, unorganized, and unexplained "preliminary list" of dozens of city-owned sites all over town that could become sanctioned camps. It looks like the fruit of an initial brainstorming session, or perhaps even a parlor game – "At least 2 acres! Has water taps! In every Council district! Go!" This is madness.

It was so bad that even nominally sympathetic Council members, such as Vanessa Fuentes, had to ask whether its messiness – such as not consistently noting which of the sites were public parks – was intentional, a way to deflect at least some of the blast they knew was coming. It's a challenge for people working in the public sector, who expect to be criticized for everything anyway, to see that blowback is not inevitable, and that they can do things that make difficult conversations easier, which they did not do here, at all. A surer strategy to increase fear, uncertainty, and doubt in the city's capacity to do useful things well could not be found.

Some of my urbanist friends ask, earnestly, why public parks or rec centers (or golf courses, which y'all know is a whole other mess) should be off limits if they're suitable. In a vacuum, they shouldn't be, but in real life now, Austinites – be they elected officials or angry neighbors or the unhoused themselves – need to know why they're suitable in ways that the status quo is not. Why not just clean up scary messes, standardize and improve the quality of tent shelter, and provide services under the bridges and along the trails where people are camping now?

Because, obviously, that is not what people voted for, which Save Austin Now quickly pointed out Tuesday. The pro-Prop B campaigners also upped the ante, saying parks and rec centers and most other public properties near where voters live are off limits because, you know, the children. They also pointed out that the Lege has approved bills in both chambers to enforce a statewide camping ban that would render this whole conversation moot.

Now, the SAN campaign apparatus, along with Greg Abbott and his allies, are mostly interested in baiting Austin and making City Hall look bad, and neither Council nor staff need take that bait. But to not acknowledge that there are real constraints here is government malpractice. It's not just that it should "go without saying" that the city isn't going to open dozens of sanctioned campsites in every neighborhood in town. Despite City Hall's attempts at deflection, that's exactly how this got framed by most local media, which isn't even that hostile to the city's goals but knows it needs to lead with the conflict. But the mishap here goes further. Instead of sharing its dilemma, and laying the foundation aligning Council and community behind a shared strategy to resolve it, the city has left everyone involved in this painful mess a little more confused and bruised and hurt and farther from ending homelessness than before. 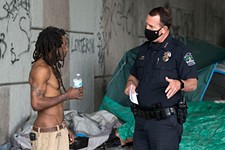