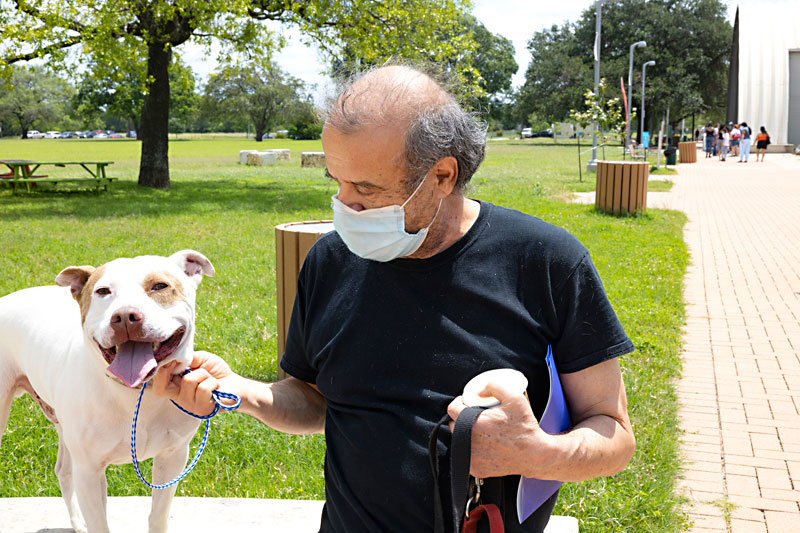 There’s No Place Like Home: Charlie (left) is all smiles outside the Austin Animal Center after getting adopted by Farid Fathi on Saturday, May 8. The AAC opened for appointment-free adoptions last weekend for the first time since the beginning of the COVID-19 crisis, after it reached critical capacity for large and medium dogs. To schedule an adoption appointment, visit austintexas.gov/content/austin-animal-center. (Photo by Jana Birchum)

Vax Here, Vax There: The drive-through COVID-19 vaccine clinic at the Circuit of the Americas has moved to the Travis County Expo Center (7311 Decker Ln.). The Central Texas Counties Vaccine Collaborative will continue to provide vaccines to the community with no appointments required.

Your Next Police Chief: City Manager Spencer Cronk has brought in executive recruiters Ralph Andersen & Associates to help the city find candidates for Austin Police's next chief. Community members will have the opportunity to share feedback with consultants at virtual meetings on May 17, 20, and 21 (see Civics).

Call It a Comeback: Austin ISD has created a new office to boost AISD's declining student enrollment, which will be overseen by Alejandro Delgado. The former deputy chief of staff to Texas Education Agency Commissioner Mike Morath, Delgado will be responsible for AISD's Parent Engagement Support Office, too.

Unfreezing the Freeze: Share your experiences and recommendations related to Winter Storm Uri with the city's new Winter Storm Review Task Force, which will then summarize community testimony into a final report for City Council by the end of July. Share feedback online via the SpeakUp Austin website, or speak remotely at the task force meetings (see Civics).

Uri Death Toll: According to the Travis County Medical Examiner's Office, at least five deaths reported during the winter storm time period (Feb. 11-22) might be a result of the storm. Meanwhile, preliminary data tracked by the Texas Department of State Health Services tallies 12 storm-related deaths for Travis County, which is the second-highest number in the state following 41 deaths in Harris County.

Barton Springs Pool will require reservations beginning Friday, May 21, in an effort to control capacity. Reservation time slots will be available in two-hour increments beginning at 8am until the pool closes at 10pm. Interested in making a reservation and/or buying a season pass? See more here.

"I hope the 144th cadet class understands its true significance in the history of our city."