City Lays Out Slow, Steady Plan to Enact Prop B 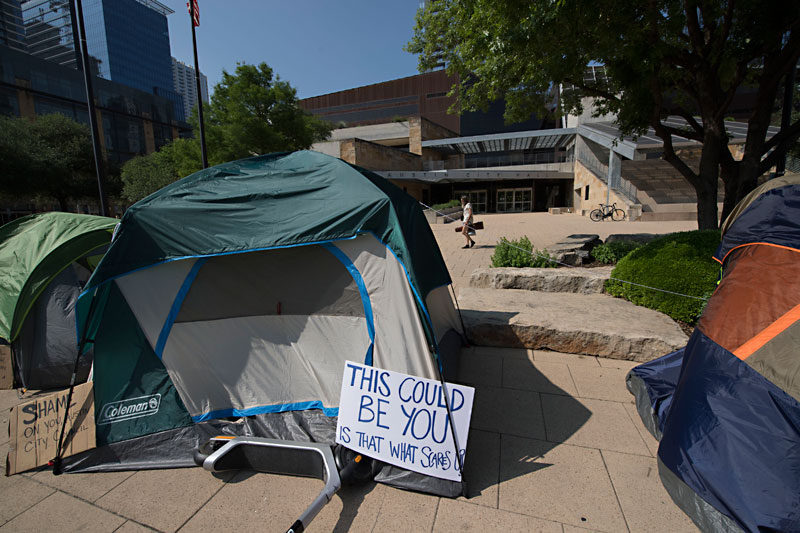 The return to the pre-2019 rules on where and how Austin­ites without homes can live in public places, prompted by the victory of Proposition B on May 1, officially took effect Tuesday, May 11. But city leaders made clear that the public encampments in parks and under bridges that fueled the Prop B campaign will not disappear overnight, as they laid out a four-phase plan to ensure a "safe and humane approach."

The current phase one, which ends June 12, involves outreach by Austin police officers and the city's Homeless Out­reach Street Team, which includes emergency medical services medics and social workers, to connect people in camps with resources, only asking them to move immediately when there are "imminent threats to health or safety." In phase two, lasting another 30 days until July 10, APD will begin to issue citations to people who refuse to leave camps. It's not until phases three and four that APD may arrest people and order camps cleared "where compliance has not been achieved after a citation has been issued," while still connecting people with services. Citations and arrests will continue to go through the Downtown Austin Community Court, whose case managers also work to guide defendants onto a path to stable housing. On Tuesday, APD Interim Chief Joe Chacon told reporters that "arrests will be a last resort" and emphasized the city's desire to approach camp clearances with care.

Advocates for the unsheltered say that displacing residents who have nowhere else to go is unsafe and inhumane no matter how gently it’s done.

Advocates for the unsheltered say that displacing residents who have nowhere else to go is unsafe and inhumane no matter how gently it's done. Throughout the pandemic, the city has followed federal health guidelines that warn against breaking up encampments, but Prop B's passage has ratcheted up expectations. In a Tuesday statement, Save Austin Now co-founders Matt Mackowiak and Cleo Petricek complained about the city's pace, saying that "residents, small business owners, visitors, and Austinites who visit our city parks should not have to wait two more months before this public camping disaster is fixed once and for all."

However, as Homeless Strategy Officer Dianna Grey told reporters, Austin's temporary shelters are still operating at COVID-reduced capacity. Even without those restrictions, there are not enough beds for every Austinite living without shelter on any given night. Last week, Council directed staff to identify potential sanctioned campsite locations and best practices for operating them, with its first report due this Friday, May 14. It's still to be seen how many such sites could open, and for how many people; city leaders declined to say whether any could be established before current encampments are cleared, even in 60 days.

City Manager Spencer Cronk did say, however, that the city would "de-emphasize" sanctioned campsites as an option for those without housing now, preferring to get people into permanent housing. That takes time, longer than it appears a majority of Austin voters are willing to wait. A targeted effort to house people encamped outside the Austin Resource Center for the Homeless in 2019 was only able to house 19 out of 100 who agreed to participate. To achieve the outcome Prop B's backers want – erasing the visible experience of Austin's unhoused poor, regardless of what happens to them later – shuffling people off to new sanctioned campsites is the path of least resistance.