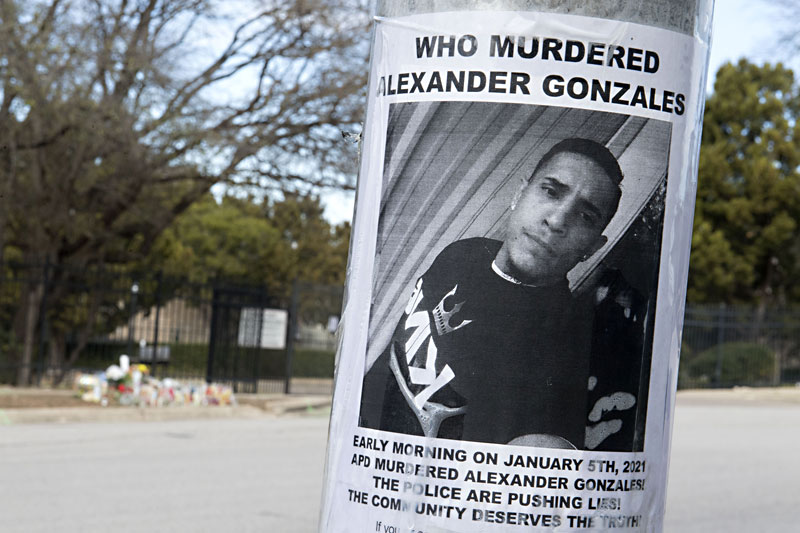 A flier near a memorial for Alex Gonzales on Jan. 12, less than a month before APD publicly identified Gabriel Gutierrez and Luis Serrato as the APD officers involved in Gonzales' shooting (Photos by John Anderson)

Three things stand out in the video released last week of Alex Gonzales' January 5 killing by Austin Police officers. The first is the quiet urging of Gonzales' partner, Jessica Arellano, as she lies bleeding on the ground, that Gonzales check on their infant son. "My baby, my baby, my baby," Arellano repeats.

The second is Gonzales' unsteadiness when he tries to honor this request. He seems on the point of collapsing, as though he is also gravely wounded.

The third is that the police officers on the scene take none of this into consideration. They do not ask about a baby, or assess Gonzales' condition, before shouting their orders. They do not attempt, at all, to de-escalate.

The "critical incident video" released April 28 includes footage from the officers' dash and body cameras as well as from security cameras at an apartment complex near the site of the killing, on Wickersham Lane in Southeast Austin. Cell phone video shot by an anonymous witness is part of the material also, as is a recording and transcript of the 911 call placed by Gabriel Gutierrez, the first of two officers who fired upon Gonzales.

In that call, Gutierrez – off duty, wearing civilian clothes, and driving his personal vehicle – tells a dispatcher that he has just shot a man in a road rage incident and requests backup, saying that the man cut him off and pointed a gun at him. The incident video does not show what Gutierrez described; footage from the apartment camera shows Gonzales' car following Gutierrez along Wickersham Lane, then pulling up alongside. A moment later, in blurry black-and-white, six small flashes can be seen as Gutierrez fires. One or more of these shots likely hit Arellano, as she sat between Gutierrez and Gonzales in the passenger seat.

Gonzales then drives ahead several dozen feet and parks, straddling the curb. Gutierrez follows, parks behind him, and calls 911, describing the scene: "The female passenger, she's lying on the ground. She's saying, 'My baby, my baby, my baby.' ... The driver, he's standing. He's got blood all over his face." Asked by the dispatcher if there is a baby in the car or if Arellano is pregnant, Gutierrez says he has no idea.

The police officers on the scene do not attempt, at all, to de-escalate.

As the call ends, Officers Luis Serrato and Brian Nenno arrive; their dash and body cams captured what follows. Serrato and Nenno rush into position behind Gutierrez's car, aim their guns at Gonzales, and order him to raise his hands. Gutierrez informs the officers that there is a gun on the driver's side of the vehicle; there is no gun in Gonzales' hands. Gutierrez does not mention that a baby may be in the car.

Gonzales stands with his arms partially raised for a few moments, then haltingly begins to make his way toward Arellano. He stumbles and leans against the trunk for support, then stumbles again as he reaches where she is lying. They can be heard speaking indistinctly, and Arellano again says, "My baby."

Serrato has moved away from the cover of Gutierrez's car, screaming, "Don't reach!" over and over. Gonzales looks back wordlessly, then opens the rear door of the car and pushes his head inside. Serrato does not wait, firing 10 rounds that fatally wound Gonzales and shatter the car's rear windshield. The baby is unharmed.

Jeff Edwards' law firm is representing Arellano; he says she is lucky to be alive after spending almost a week in intensive care for gunshot wounds. Unless another witness emerges, only she can confirm or challenge Gutierrez's road-rage claim. But Edwards has advised Arellano not to speak publicly for the moment. "Until we meet with the district attorney, we're not providing a statement of the details," he said, "other than to say they differ from what's been reported." 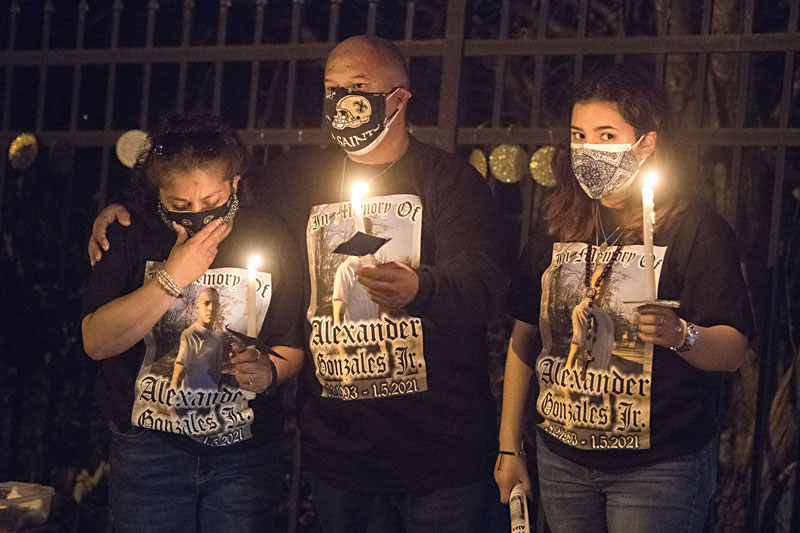 (l-r) Gonzales' mother, Elizabeth; his father, Alexander; and sister, Angel, during a vigil on Feb. 1

Edwards notes that what is not in dispute is bad enough: "The facts are that [Gutierrez] shot into a car and hit a defenseless woman, and the car had a baby in the back seat. And that is reckless and dangerous by any stretch."

It's still not known how badly Gonzales was wounded by those same shots before the on-duty officers arrived on scene. Two autopsies have been conducted, one by the Travis County Medical Examiner's Office and one by pathologists hired by Scott Hendler's law firm, which is representing Gonzales' mother, Elizabeth Gonzales. The M.E.'s Office has not made its findings public, and Hendler says that, since they were the first to handle Gonzales' body, his pathologists need access to that work before they can reach their own conclusions.

“If the allegations about the training academy are to be believed – that there’s a warrior culture and that it’s militaristic – then that needs to stop. We need to get back to the caretaking function of police officers.” – Attorney Jeff Edwards

More definitive answers are not expected soon. "The medical examiner seems to have a cozy relationship with the Austin Police Department," Hendler said. "The only reason they're not releasing the findings is because [APD] asked them not to." He anticipates legal proceedings to force the release of the autopsy report, a process that will take at least three months.

As for Gutierrez and Serrato, their actions are under review by APD's Special Investigations Unit and the Travis County District Attorney's Office, working jointly. D.A. José Garza has promised to bring the cases before a grand jury within six months; beyond that, the office is saying nothing. Serrato's attorneys Ken Ervin and Doug O'Connell, who are also representing the officers indicted in the deaths of Mike Ramos and Javier Ambler, have asked Garza to make the deliberations of the grand jury public once it convenes, which is illegal in Texas and most everywhere else.

As the video was being released last week, the Austin Police Association issued a pair of statements that prompted anger in the community. The first framed Gonzales' death as unavoidable: "The unfortunate reality of police work is that officers are oftentimes put in situations where they are forced to react to the actions of others and at times, these situations end with terrible outcomes." The second, via social media, went further: "Can you imagine the reduction in officer involved shootings if people would comply and complain later?" This post was quickly taken down, but screenshots continue to be shared.

Chas Moore of the Austin Justice Coalition minced no words responding to the police union. "This disgusting insinuation places blame on victims of police violence and communities of color," he said. "Alex Gonzales did not at any moment brandish a weapon; officers ignored the actions of a father desperately preoccupied with his child, and then issued a death sentence with such unnecessary force that there can be no excuse for a lack of conviction." AJC is sponsoring a march from Huston-Tillotson University to Chicano Park on Saturday, May 8, with demands for justice. Among them: that Serrato be charged with first-degree murder; that Gutierrez be indicted with the most serious charge possible; and that APD commit to de-escalation training.

The video illustrates what many justice advocates say exemplifies APD's pattern of reacting quickly with violence, a mindset introduced to cadets at the police academy. Serrato and Nenno each have about two years of APD tenure: "These are young officers," Edwards said. "And if the allegations about the training academy are to be believed – that there's a warrior culture and that it's militaristic – then that needs to stop. We need to get back to the caretaking function of police officers."