For Trans Texans, One Bill Forward, Two Bills Back 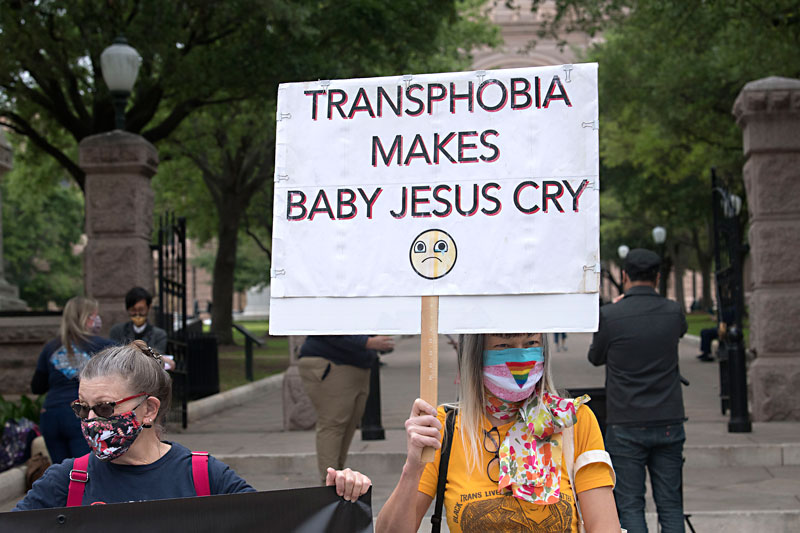 As the Chronicle went to press on Wed­nes­day, April 28, the Texas Senate passed Senate Bill 1646 by Sen. Charles Perry, R-Lubbock, which seeks to classify any gender affirming care for minors as child abuse under state law. It's one of nearly a dozen anti-LGBTQIA bills that have moved during the 87th Texas Legis­lature. Texas has filed the most anti-LGBTQIA bills – the majority of which target trans and intersex children – of any state this year, according to the national Human Rights Campaign.

During the bill's second reading on April 27, opponents voiced concerns about SB 1646's potential harmful impacts should it be enacted into law, citing research studies that have shown that trans youth have a greater risk of suicide and experiencing mental illnesses. Perry argued his bill is necessary in order to prevent kids from making "irreversible" decisions by receiving gender affirming care that they would regret once older. However, Sen. John Whitmire, D-Houston, pushed back on that, emphasizing that some medical experts refute such claims. Research suggesting that trans kids are less likely to experience gender dysphoria later in life – such as a 2008 study published in The Journal of the Ameri­can Academy of Child and Adolescent Psych­ia­try cited by Perry in Tuesday's floor debate – has been called into question, as some medical experts have critiqued the studies' broad methodologies for including children who might exhibit gender nonconforming behaviors and preferences but are not transgender.

“Are you ever concerned that maybe you’re wrong?”

"Are you ever concerned that maybe you're wrong?" asked Whitmire. "I'm going to ask you, and my colleagues, to consider that you may be wrong, and if you are, you're doing irreparable harm to Texans."

The Senate's action on SB 1646 followed two weeks of votes in both chambers to advance anti-trans legislation. On Thursday, April 15, the House Public Health Com­mit­tee approved House Bill 1399 from Rep. Matt Krause, R-Ft. Worth, which if enacted would prohibit professional liability coverage for doctors providing gender affirming care and procedures for minors.

That same day, the Senate passed Perry's SB 29 targeting trans student-athletes, but that bill has yet to have a hearing in the House Committee of Public Education, chaired by Rep. Harold Dutton, D-Houston. Dutton told the Houston Chronicle last week that the measure likely didn't have the votes needed to get through his committee, which is closely divided between the parties (7-6 R-D). HB 1399 also is in limbo in the House Calendars Committee, which decides when, if ever, bills land on the House floor; it's split 6-5 R-D.

Despite the brief reprieve, the state's major LGBTQIA advocacy group Equality Texas says the next few weeks are critical. May 10 is the deadline for House committees to vote on House bills, with May 13 being the last day for such bills to pass out of the lower chamber. The advocacy org has deemed House bills – particularly if they have a Sen­ate companion bill – as higher priority than those coming from the Senate.