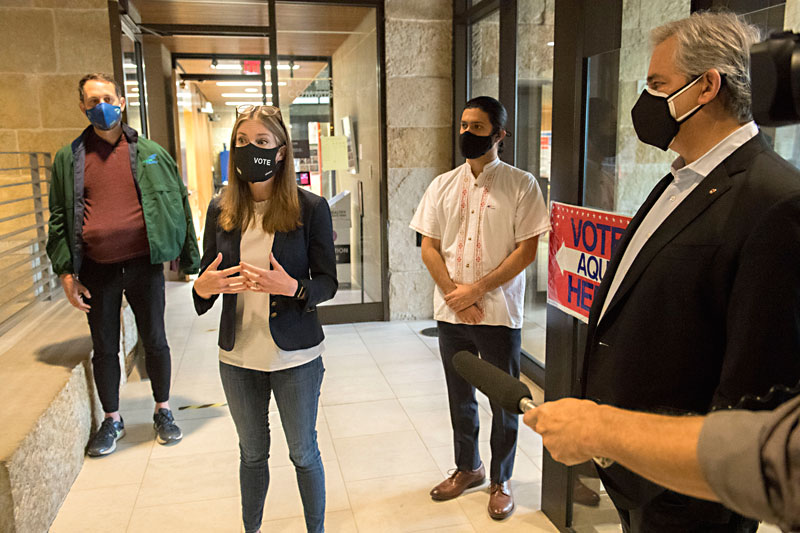 Since Austin voters in 2012 approved moving Council races to the same November ballots as state and federal elections, there's only been one special election held in May (Texas' other uniform election date) before now: the 2016 effort by Uber and Lyft to overturn Council's ride-hailing regulations, on which the companies spent more than $10 million and lost by 10 points. That campaign expected to turn out low-propensity Austin voters with its avalanche of paid media and direct mail, but managed a mere 17.3% turnout – still a marked improvement on the prior norm for May elections (the mayoral race in 2012 between Lee Leffingwell and Brigid Shea saw a 10.7% turnout). This year's election, also driven by big-spending campaigns aiming to goose turnout, may break that mark; as of Tuesday, April 27, the last day of early voting, 103,832 Travis County voters (not all of them being Austin residents, of course) had cast ballots, or 13.7%. As usual, the last two days of early voting were by far the heaviest, with nearly 44,000 ballots cast.

The big dollars in this cycle are flowing to Save Austin Now's campaign for Prop B, but the dueling committees fighting for and against Prop F (strong mayor) aren't exactly skint. Austinites for Progressive Reform, the group that placed Propositions D through H on the ballot, reported just under $65,000 raised and just over $118,000 spent in its 8-day-out filing, covering the period from March 23 to April 21; it had $16,000 cash on hand (and $92,000 in outstanding loans). The two PACs fighting Prop F, however, were poised to outrun APR in the home stretch: Austinites for Equity, the labor PAC behind ATX for All ("F No on F!") reported nearly $115,000 cash on hand, as did Restore Leadership ATX, the business PAC behind Austin for All People.

Joining the ranks of groups opposed to Prop F is Central Texas Inter­faith, a coalition of more than 50 religious congregations, nonprofits, public schools, and unions that describes itself as "strictly nonpartisan." Curtis Wyman, a leader with CTI and University United Methodist Church on Guadalupe, says that CTI leaders concurred that a strong mayor would be a bad idea, mainly because of that mayor's power to veto council decisions and the possible politicization of department head appointments. "We think there's a very good system [currently] that works quite well. And we feel like the mayor[al] veto would take away some of the ability of the council members to represent their constituents." Wyman added that the motivation for Austinites for Progressive Reform's package were unclear, speculating that "there are some people who are for strong mayor because they don't like the current mayor, and we think that's a bad reason to change the system." CTI also cited a point of contention shared with Austin for All People, particularly strongly by Pastor Joseph C. Parker of David Chapel: APR's early messaging about the origins of the council­-manager system in the 1920s. "They seemed to make a position that the current system was racist and strong mayor would be less racist," says Wyman. "We disagree."