A neighborhood to call home Earlier this month, MLF announced the next two phases of Community First! that will add an additional 1,400 homes at two sites. Phase 3 will be located on 51 acres near the current village (also 51 acres) on Hog Eye Road in far Northeast Austin; phase 4 will be 10 miles to the south at a 76-acre site on Burleson Road between McKinney Falls Parkway and U.S. 183. Construction on both sites is expected to begin in the summer of 2022, said Graham, and it's MLF's hope that both phases will be built concurrently.

The sites will be close facsimiles of the original village, plus some modifications, Graham told us, with each intended to function as a self-contained community where residents can access MLF's supportive services and share amenities with their neighbors. Currently, more than 200 residents live at Community First! in a mix of housing types, including RVs; 200-square-foot, site-built micro-homes that share communal laundry, restroom, shower, and kitchen facilities; and 400-square-foot park model homes that are prefabricated off-site and then installed at the village.

Graham added, "There's some nuances of things that we've learned in phase 1 and phase 2 that'll show up in phase 3 and phase 4 that are going to be pretty powerful." Chief among these will be pocket neighborhoods of mixed housing units that architect Sarah Satterlee, director of architecture and site development for MLF, has dubbed "neighborhoods of knowingness." MLF Director of Architecture and Site Development Sarah Satterlee (left), who also lives at the village, and Community First! resident Lee Espinoza in pre-COVID-19 times (Courtesy of Mobile Loaves & Fishes)
“I think for our specific type of person, that has really not had a place to call their own maybe ever, being able to have a freestanding structure they can call their own is really important.” – Sarah Satterlee, Mobile Loaves & Fishes

"My job is to figure out how we can build communities, and we see housing and the hope environment of our neighborhoods as a tool for that," said Satterlee, who has a background in public interest design through the Tulane School of Architecture's Albert and Tina Small Center for Collab­or­at­ive Design. Satterlee hopes to develop 10-15 "neighborhoods of knowingness" within the new sites, with each neighborhood made up of about 40-50 units, including micro-homes and RVs such as Com­mun­ity First! has currently, as well as new housing types MLF is exploring. All of these homes, she explained, "would be located around the central outdoor gathering space, and then all of these neighborhoods would be linked together by a robust network of pedestrian paths." Those paths would also connect with greenspaces throughout the village and a central hub for supportive services.

Pocket neighborhoods, designed to foster community while protecting personal privacy, can be found in housing solutions for more vulnerable populations, such as seniors aiming to age in place. Satterlee sees MLF's model of stand-alone units as a means of empowerment for MLF's typical clients, who are in their late 50s and have spent 10 years living without a home.

"They can see the bounds of where they get to dwell, and it's something that they get to live in permanently if they choose to. There is something different there than shoeboxing people into a large building, where the only way that their house gets to express itself is a door that faces a hallway," said Satterlee. "That's not to say that denser mechanisms for housing people are bad – they're great and I think density is good – but I think for our specific type of person, that has really not had a place to call their own maybe ever, being able to have a freestanding structure they can call their own is really important."

MLF's expansion is a significant step in the organization's "10 Year Plan to Miti­gate Homelessness in Austin" that it first shared publicly in 2017, which aims to produce 1,000 homes. Graham said MLF will begin a fundraising campaign, most likely this fall, to support that progress. "There's an optimistic view, and then there's a longer term view," he said. "And so in our mind, we are prepared to do this in a five- or six-year period of time, very aggressive, if the resources come into play for us to do that. I'm also prepared for a 15-year time frame.

"Our goal – the way that we speak our language – is we're going to set the banquet table for this, and then we're going to be looking to the community to help us garner the resources that it's going to take to pull this together." 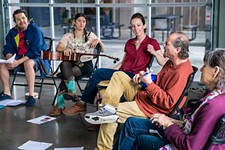 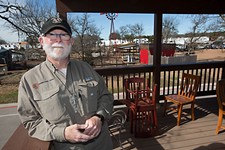