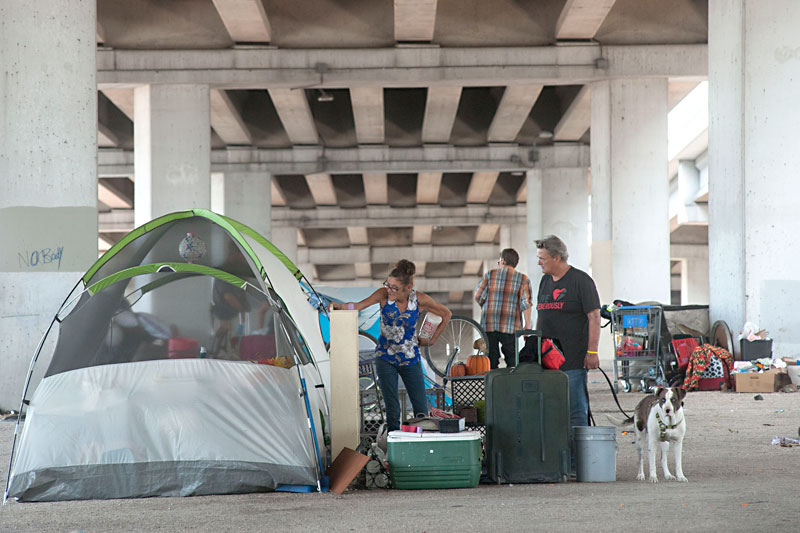 In the next three years, Austin aims to "unlock" an additional 3,000 homes for unsheltered residents, among other strategies to help more Austinites exit homelessness into stable housing.

That benchmark is one of three key objectives unveiled by local leaders last week after a virtual summit of city officials including Mayor Steve Adler, the End­ing Community Homelessness Coa­li­tion, the Downtown Austin Alli­ance, the Austin Chamber of Commerce, Austin Justice Coalition, Homes Not Hand­cuffs, and other service providers, advocates, and community partners. The overall strategy also calls for creating more capacity with more service providers and implementing "rehousing activations" specifically targeting encampments, such as the city's recently launched HEAL (Homeless Encampment Assistance Link) initiative. The 3,000-home target includes securing up to 2,300 rental units in the market using landlord incentives, plus developing up to 1,000 units of permanent supportive housing (PSH), which has been the key component of the city's broader "housing first" strategy.

"We're kind of putting things upside down," said Lynn Meredith, ECHO board member and chair of the summit's Core Leadership Planning Group, of the strategy. "The way we're thinking about it is, we don't even approach a person to be rehoused until we know we have someplace to rehouse them." That's a departure from today's response system, explained Mere­dith, who described a system with a housing supply that doesn't equal the demand: Some unhoused residents connect with an outreach team, "get on a list, and then it's like, 'Wait here, we'll be back,' because we don't have the housing stock."

According to a 2020 analysis recommending changes to how the city worked with providers to close housing gaps, Austin should have 7,751 rapid rehousing and PSH units to implement its established plans to end homelessness. That's more than four times the capacity currently available to providers (about 1,500 units). However, the summit's goal of 3,000 exceeds the most recent count of those without homes: ECHO's 2020 Point in Time Count found 2,506 Austinites experiencing homelessness on a given day last January, 1,574 of them unsheltered. (ECHO sought and received an exemption from the 2021 PIT Count because of COVID-19 concerns; ECHO's Research and Evaluation Team is expected to release 2021 data the agency gathered through alternate methodology in the coming weeks.)

“The goal is to have a system in place where someone becomes homeless and in 30 days [they] have a path out of unsheltered homelessness.” – ECHO’s Lynn Meredith

The strategy emerging from the summit emphasizes building up this capacity to rehouse the unsheltered on an aggressive three-year timeline with specific benchmarks: housing 100 people by this June, 200 by August, 400 by December, and 1,200 by October 2022, building up to 3,000 people by April 2024. Although 3,000 units is the summit's "accountable target," the strategy proposes "system design targets" closer to 4,000 units: "Unlocking housing units is difficult; thus we must invest as if to overshoot our goal and set a course for equilibrium." Another target is to provide 3,500 Austinites with stabilizing support to keep them from entering or reentering homelessness.

Developing housing is more expensive than finding rental units, acknowledged Meredith, who pointed to 234 PSH units already in the pipeline. The granular details of how the 3,000 units would break down among potential providers are still being worked out, she says, along with how the costs would be spread among agencies and funding streams. The summit estimates its strategy will need $240 million in operating costs over three years; committed and anticipated funds so far amount to $72 million.

Along with adding new culturally reflective and proficient providers for outreach efforts, the strategy's other key proposal is to pursue 24 targeted "rehousing activations" over 18 months, with immediate opportunities to get those living in encampments into housing. A governance model with community partners would be charged with overseeing goals, equity strategy, and transparency; data being tracked by individual organizations will also be compiled into one online dashboard as part of the strategy. "In three years, in five years, the goal is to have a system in place where someone becomes homeless and in 30 days [they] have a path out of unsheltered homelessness," said Meredith. "This population right now on our streets is at a manageable level. I mean, we're not looking at tens of thousands of people.