As Outrage Grows, the Anti-Voter Train Rolls On 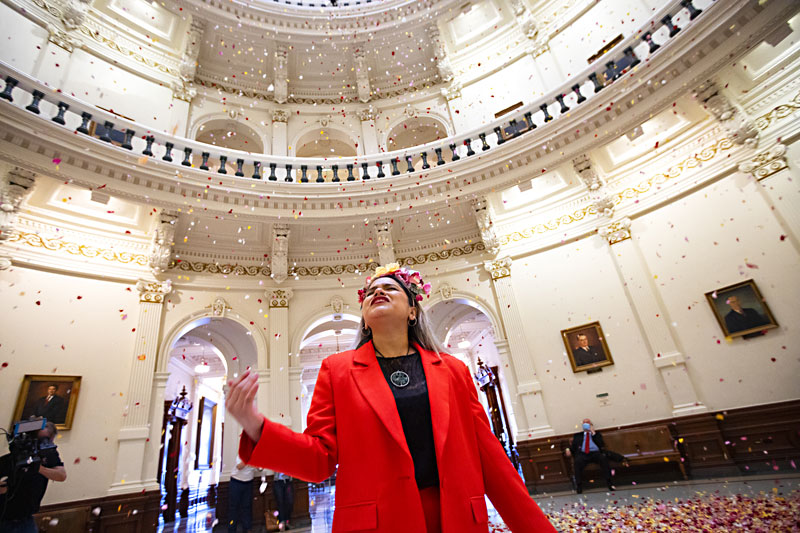 Tori Baltierra from the band Tiarra Girls joined NextGen America and Jolt Action activists on Thursday, April 5, dropping over 200,000 rose petals from the Texas Capitol's rotunda in protest of SB 7; the petals symbolized the number of young voters of color in Texas who turn 18 every year. (Photo by Jana Birchum)

The steady march of "election integrity" legislation continued at the Lege last week, as House Bill 6 was approved by the House Elections Committee along party lines. The bill, authored by Elections Chair Rep. Briscoe Cain, R-Deer Park, takes aim at mail-in voting and at local jurisdictions' efforts to expand access to the polls, and requires voters who need assistance to disclose why they need assistance. The corresponding legislation in the upper chamber, Senate Bill 7 by Sen. Bryan Hughes, R-Mineola, one of Lt. Gov. Dan Patrick's "priority" items, was approved in a midnight vote by the Senate earlier this month. The two bills aren't identical, so a conference committee will probably craft the final version; by the time that happens, the increasing attention and outrage over the Lege's reflexive efforts to make it harder for people to vote may have broken through.

As HB 6 passed, young people with JOLT Action, a progressive group focused on mobilizing Latino voters, rained over 200,000 rose petals down on the rotunda floor. "Texas is beautiful," said Gloria Gonzales-Dholakia, executive director at JOLT Action. "A big piece of what makes us beautiful is our diversity, and we really think that diversity is not something that should be feared."

Both sides of the debate took aim at Texas corporations. Patrick managed to personify American Airlines in a press conference, scolding "Mr. American Airlines" for speaking out against SB 7. "When you suggest that we are trying to suppress the vote, you are in essence, between the lines calling us racist, and that will not stand," Patrick said in a highly emotional appearance, even by his standards. He relented when pressed on whether companies would see tax incentives disappear if they opposed the bills, saying that he wasn't in favor of retribution.

In a simultaneous press conference, Texas voting rights advocates pushed corporations, including AT&T and H-E-B, to use their platforms to combat voter restrictions. "Not only are we asking for you to make statements, but we need you to move beyond talking the talk to walking the walk," said Frederick Haynes III, senior pastor at Friendship-West Bapt­ist Church in Dallas. "Do not say on one hand that you are against voter suppression, but with the other hand you fund the very Republicans and the very persons who are engaged in these voter suppression tactics." The Texas bills have generated significant buzz nationally, as around 100 corporate leaders from across the country met last weekend to discuss a response to restrictive voting legislation being proposed by Republicans in multiple states, as polls continue to show that sizable numbers of GOP voters believe the baseless claims of widespread fraud in the 2020 election. 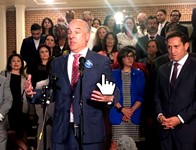