APD Veteran Says She Told the Truth and Paid the Price 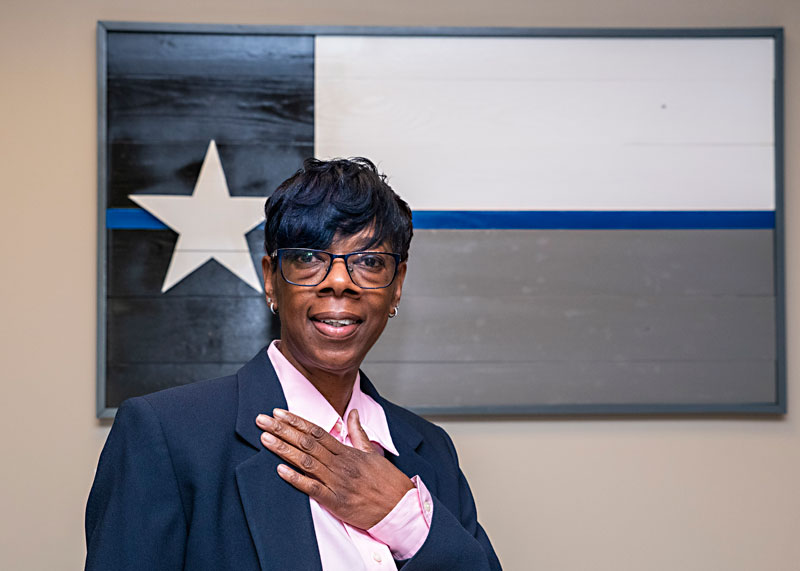 Sergeant Chandra Ervin, a 20-year veteran of the Austin Police Department, has filed a complaint with the U.S. Equal Employment Opportunity Commission accusing her superior officers of intense and ongoing racial discrimination. "They are white. I am Black," Ervin's complaint reads. "They have singled me out for unwarranted and racially discriminatory criticism and discipline on at least six occasions where my white male peers were not scrutinized for the same actions."

Ervin says this treatment was retaliation after she refused a superior's order to doctor timesheets for other officers after the Black Lives Matter protests that began at the end of May 2020. That higher-ranking officer had learned that about half of the force was relieved of assigned duty early during the protests; while peers overseeing other departments saw no need to make changes to officer's time records, Ervin's superior ordered the three sergeants under his command to make clerical changes to the timesheets of those they supervised.

The changes would have not affected the officers' pay, but Ervin considered the order illegal. "People have gotten fired for falsifying their timesheets," she said. "I know officers, I know a sergeant, who got fired for falsifying a timesheet." Indeed, the manipulation of timesheets and overtime has long been cause for discipline at APD; outgoing Chief Brian Manley suspended an officer for 15 days in one such case last month.

After refusing to modify the timesheets, Ervin was presented with, and told to sign, a "conduct counseling memo" acknowledging that she had disobeyed the orders of a superior officer. When she refused, she was threatened with an Internal Affairs investigation. She was pressured to sign the document on two more occasions and finally relented in July 2020 – but at that point revealed to superiors she herself had requested an IA investigation of the matter.

That made Ervin a whistleblower who could not legally be fired or demoted while that investigation was pending. It did not prevent the other retaliation she says began in earnest. "So after I signed the statement, all of a sudden, 20 years into my career, I needed professional development courses," Ervin said. "I needed to have a mentor. I needed to have regular professional development meetings."

For the next six months, through January 2021, Ervin says her bosses made her life at APD miserable. She was compelled to take online classes and meet with a mentor for hours each week, causing her to fall behind on her work. When she came in on a day off to catch up, she was accused of working more than 40 hours a week without permission. She was criticized for her clothing choices, forced to refrain from wearing a baseball cap, though many white male sergeants routinely wear them. Finally, superiors attempted to overrule her hiring choice of a Black female, rather than a white male, for an open position in the office she oversees, Financial Crimes.

“They do treat people of color differently, but here’s the thing – it’s been done for so long they think that’s normal. They’re like, ‘There’s no racism here.’ That’s because you’re not Black! You’re not living it.”

Ervin firmly believes the treatment she received was the result of institutional racism. "They do treat people of color differently, but here's the thing – it's been done for so long they think that's normal," Ervin said. "They just think it's normal. They're like, 'There's no racism here.' That's because you're not Black! You're not living it."

Rebecca Webber of Hendler Flores Law is representing Ervin and is having difficulty getting APD to provide her with records that should be public, ones she knows exist and are relevant to the case. "The sergeant had already let me review emails about the time­sheet kerfuffle," Webber said. "And I had the asinine, typo-riddled 'conduct counseling memo' that they forced her to sign after she refused to doctor her subordinates' time­sheets. She also gave me a cringey recording of her commander dressing her down in the most degrading way because Chandra wore a baseball cap when she dropped into the office on her day off."

The city has responded to Webber's public information request by saying that no such emails concerning these matters are available. "That was ludicrous," Webber said. "I already had some of the emails." After a lengthy back-and-forth, the city then told Webber the emails are confidential because they had been part of an internal investigation.

"In other words," Webber said, "Chandra was ordered to do something illegal; she raised it with the proper authorities; they investigated; they gave Chandra's chain of command a pass on the illegal order; and they now say the relevant info will forever be kept secret because no misconduct was found. This is not how it is supposed to work."

The superior officers who compelled Ervin to sign documents, take courses, and justify her hiring decisions have left the department or been shuffled to new assignments. But after her successful career at APD, and as one of the few African Americans to play a leadership role in the department, the last six months have taken a toll. "I've had to see a psychiatrist because of all the crying, the headaches, the sleepless nights, the going without eating," Ervin said. "I've lost so much weight. [With] the retaliation they've been putting me through, I'm thinking they're looking for a way to fire me. They're looking for a way to get rid of me."