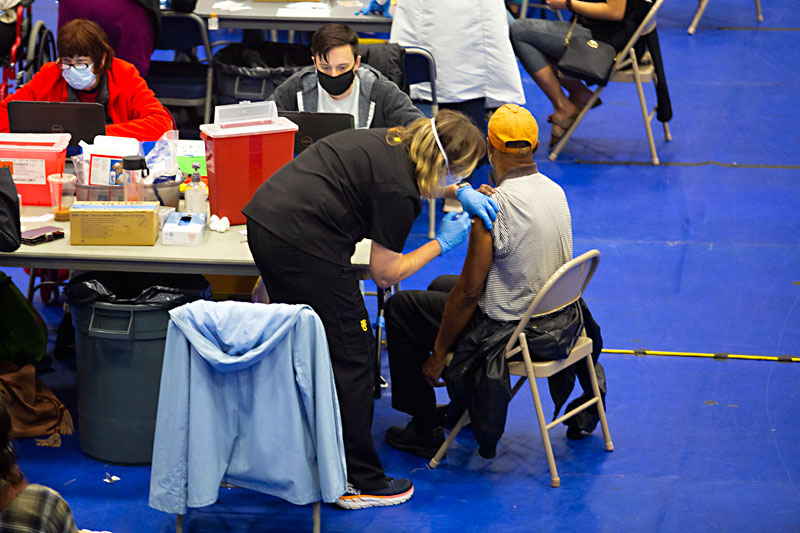 As Texas continues to direct a significant portion of its COVID-19 vaccine supply to state-designated hubs, data suggests the strategy isn't reaching Black and Latinx residents.

Last month, UT-Austin's LBJ School of Public Affairs released its Texas COVID-19 Vaccine Tracker, a digital tool for tracking vaccination progress across the state. In addition to publishing data on providers and the pace of distribution, the tool also aims to assess equity by tracking vaccines given by age, race and ethnicity, and gender, as well as geography. As of April 5, it shows that white Texans, who make up 42% of the state's population, account for about 41% of total vaccine doses administered, despite only representing 34% of COVID cases. Meanwhile, the only slightly smaller number of Texans (39%) who are Latinx have received about 24% of doses administered even though they've accounted for nearly half (46%) of COVID-19 deaths.

Here in Travis County, similar disparities in vaccine access persist. According to data pulled by the project on April 1, the number of doses administered per 1,000 residents is much higher west of I-35 and highest in 78738, which includes Bee Cave, Village of the Hills, and Lake Travis High School. It's lowest in ZIP codes in the Eastern Crescent, such as 78741 (Montopolis) and 78617 (Del Valle), which have been hit hardest by the virus.

Matt Worthington, a senior project manager for data initiatives at the LBJ School, says, "Most of the state's vaccine supply is invested in vaccine hubs and has been for quite some time now." As of March 31, about 55% of the state's vaccine supply was going to hub providers, which state health officials have relied on since early January, theorizing that these large sites could reach large numbers of people outside of traditional clinical settings. The Texas Department of State Health Services doesn't publish demographics data for hub sites, so the Texas COVID-19 Vaccine Tracker also can't offer a complete picture of who is and isn't being reached by vaccine hubs. However, the tracker found that hubs are "inaccessible" for the approximately 5.6 million Texans who are at least 30 minutes away by car from a hub site. Around 2 million Texans are equally far removed from one of the Texas pharmacies the state supplies with vaccine doses. When looking at the data, Worthington said, "I think one of the questions that we wonder is: When is it that we need to start thinking differently about how we're investing our supply of vaccines among providers, and how do we increase the number of providers and in particular areas that need it?"

That's mostly the state's question to answer, although Austin Public Health, Travis County's largest vaccine hub, is beginning to explore different strategies to reach Austin's most vulnerable populations. If Texas doesn't shift its approach, Worthington is concerned about the implications for reaching herd immunity: "If our current strategies aren't working for particular populations in the state, is there a point at which the pace is going to stave off or potentially start dropping?"